Afghanistan, NATO on watch for use of drones by militants 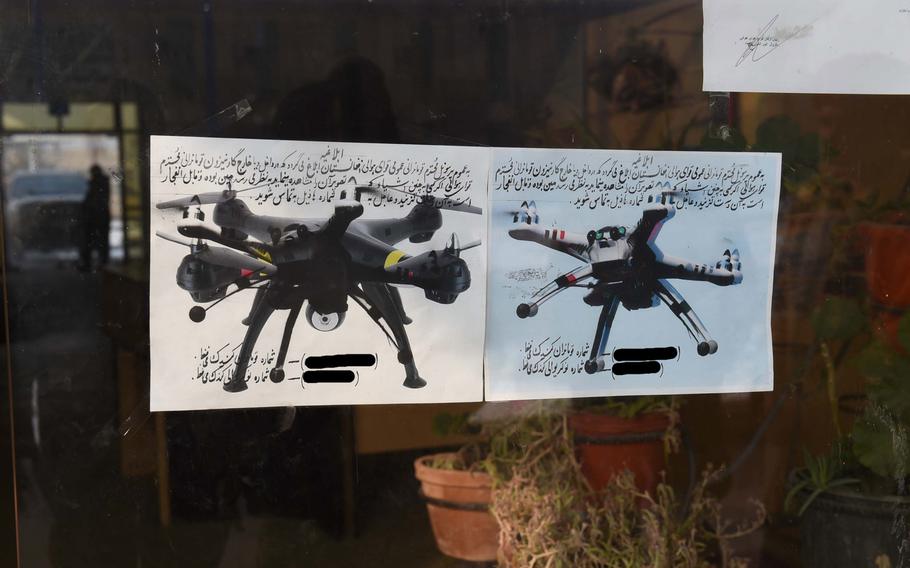 Buy Photo
Two flyers at an Afghan Air Force base in Kabul warn troops that hobby-style quadcopters could be armed and tells them to notify base security immediately if they ever see one in the air, Jan. 16, 2017. The phone numbers have been blacked out. (E.B. Boyd / Stars and Stripes)

Buy Photo
Two flyers at an Afghan Air Force base in Kabul warn troops that hobby-style quadcopters could be armed and tells them to notify base security immediately if they ever see one in the air, Jan. 16, 2017. The phone numbers have been blacked out. (E.B. Boyd / Stars and Stripes) An Iraqi Counter Terrorism Service soldier in Mosul, Iraq, examines a quadcopter, modified by the Islamic State group to carry a 40 mm rifle grenade. Insurgent groups in Iraq started using handheld drones for surveillance two years ago. Now many of them have figured out how to arm them to attack adversaries. (Photo courtesy of Mitchell Utterback) Pictured is a quadcopter modified by the Islamic State group to drop 40 mm rifle grenades. The devices were downed by the Iraqi Counter Terrorism Service in Mosul, Iraq. Insurgent groups in Iraq are ahead of militants in Afghanistan in their use of handheld drones. Many of them now use the devices for surveillance, targeting and armed attacks. (Photo courtesy of Mitchell Utterback) 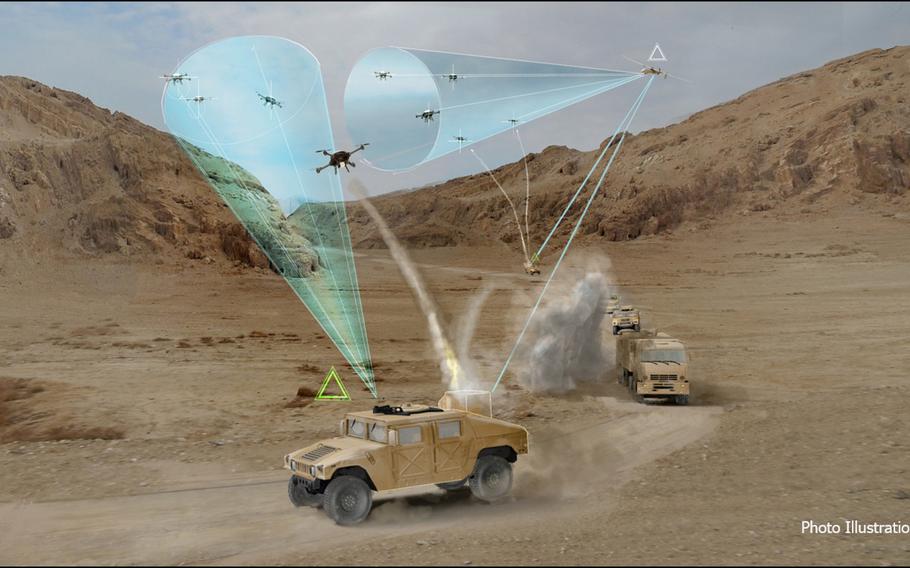 Private and military organizations are researching ways to protect troops from armed drones. This illustration, from the Defense Advanced Research Projects Agency, is a conceptual drawing of how a mobile airborne system could track and possibly jam incoming drone swarms. (Photo courtesy of DARPA)

KABUL, Afghanistan — NATO and the Afghan military are beginning to keep an eye out for small drones that could be used by insurgents to provide reconnaissance and targeting information against coalition forces.

The devices, which range from hobbyist quadcopters to small fixed-wing Styrofoam aircraft, have been used by fighters in Iraq and Syria, mostly for intelligence-gathering purposes of or for filming propaganda videos. Recently, some extremist groups there have started arming them with small munitions to attack adversaries.

The tiny craft, an emerging platform in guerrilla warfare, could allow Afghan insurgents for the first time to use aerial reconnaissance in a situation in which government forces retain absolute control of the air. They could also significantly boost the guerrillas’ capability to gather battlefield intelligence for which, until now, they have relied almost exclusively on human sources.

A spokesman for the U.S.-led NATO coalition in Afghanistan said they had seen “a modest increase” in the number of drones around Kabul-area bases.

“In the past, seeing a UAV once or twice a month would be normal,” U.S. Navy Capt. William Salvin said, referring to unmanned aerial vehicles. “Now, we’re seeing them once or twice a week.”

But he added that NATO wasn’t worried yet. “It’s something we watch for, (but) we believe their use will have very little impact to our operations.”

In October, the Taliban claimed to have used a drone to record a suicide attack in Helmand province for propaganda purposes.

In response, the Afghan air force has started posting flyers on its bases warning troops to be on the lookout for the devices. One such notice, which displayed a picture of a quadcopter, warned personnel they “could be bombs” and asked them to “inform base security as soon as possible” if they ever saw one.

Hobbyist quadcopters can be bought from commercial stores and cost from several hundred to several thousand dollars. In Syria and Iraq, militants have mounted them with cameras to provide targeting information for mortars or real-time visuals for commanders in the midst of battle. Recently, some groups have also developed mechanisms that allow them to load hand grenades or small-caliber mortar shells onto the craft and drop them on their adversaries.

“An embedded reporter with Iraqi forces in Mosul reported that, in one hour, they came under attack 10 times by (Islamic State) drones dropping hand grenades,” said Chris Woods of Airwars, a group that monitors civilian casualties from airstrikes in Iraq, Syria, and Libya.

To date, there haven’t been any reports that militants in Afghanistan have used armed drones. Defense Ministry spokesman Gen. Dawlat Waziri, said the air force had posted the flyers because “it’s important to educate our soldiers about the latest technology.”

Because new technologies now spread so rapidly, coalition forces in Afghanistan could see the Taliban and other groups begin to use small armed drones in the coming year, experts say.

Many parts for the devices can be purchased commercially or produced using 3-D printers. Instructions for building jerry-rigged systems, such as the grenade-release mechanisms, can easily be obtained.

“We’ve seen this before,” Woods said. “Back in 2006, (improvised explosive devices became) were unheard of in Afghanistan. Eventually, IEDs became the primary cause of loss of life for U.S. and Afghan forces.”

Robert Bunker, an adjunct professor at the U.S. Army War College’s Strategic Studies Institute, who has studied the use of unmanned aerial vehicles by terrorist organizations, predicted that the Taliban could eventually set up drone factories.

“These would be much like IED factories and could be co-located with them,” he said.

U.S. forces and private researchers in the United States and elsewhere have begun developing possible defenses against drones. These include a rifle-like device that blocks the radio frequencies of remote-controlled drones. The Air Force is also working on systems that can jam small drones from the air.

Salvin said NATO does “have counter-measures in place,” but he declined to elaborate, citing operational security.