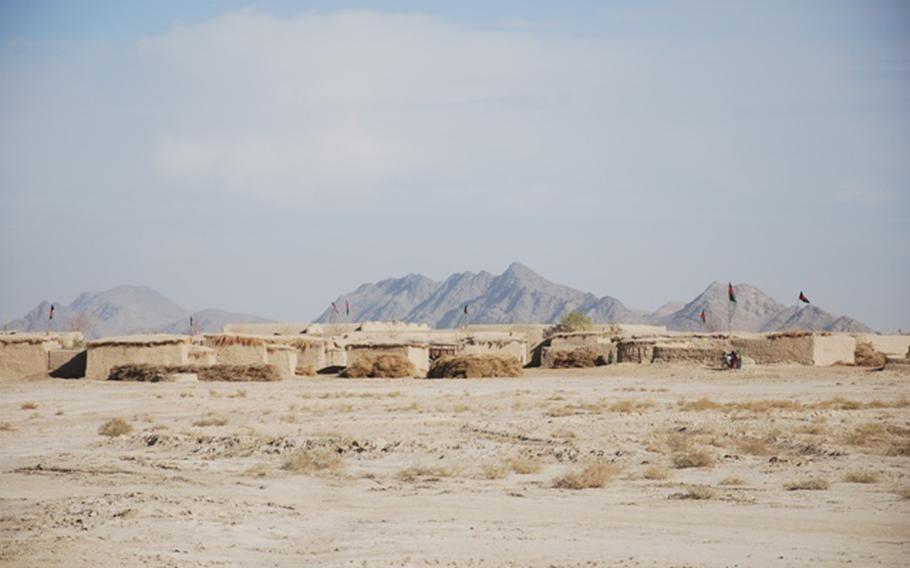 Flags fly on top of homes in Uruzgan, Afghanistan, signaling that Afghan National Security Forces have cleared the area of insurgents and weapons during Operation Chamtoo in December 2013. The Afghan government will investigate a series of U.S. airstrikes that apparently killed eight people in the region over the weekend, officials said Tuesday. (Courtesy 205th Corps Public Affairs)

KABUL, Afghanistan — The Afghan government will investigate a series of U.S. airstrikes that apparently killed eight people over the weekend, the Interior Ministry said Tuesday.

A committee has been appointed to lead the investigation, the ministry said in a statement. A spokesman said the names of the committee members were being withheld for security reasons, as they will be traveling to the embattled province of Uruzgan where the strikes occurred.

Two strikes were carried out Sunday in response to an “immediate threat,” Brig. Gen. Charles Cleveland, spokesman for the NATO-led Resolute Support mission in Afghanistan, said in a statement Monday.

U.S. forces, in coordination with Afghans, called in the air raids in self-defense against “individuals firing on, and posing a threat to, our Afghan partners,” Cleveland had said, but it was unclear who the individuals were or why they were firing on the Afghans.

Local highway police commander Haji Rahimullah said the attacks hit a police checkpoint on the main highway near Uruzgan’s provincial capital of Tirin Kot, killing a police officer in the first strike and, in a second run, at least seven more officers who responded to the scene.

Some reports Monday said the people killed were reserve police officers in civilian clothing carrying weapons, which may have been why they were struck.

The Interior Ministry statement said eight people had been killed, but it did not say they were police. The ministry spokesman said more details on the strikes would be released after its investigation was completed, including the names of the committee members and whether all eight killed were police officers.

Afghan forces have primary responsibility for their country’s security in the fight against the 15-year Taliban insurgency, but U.S forces are authorized to conduct strikes to prevent strategic losses as well as to protect the Afghans and their allies, such as international advisers.

U.S. officials in Kabul did not have any further comment Tuesday.