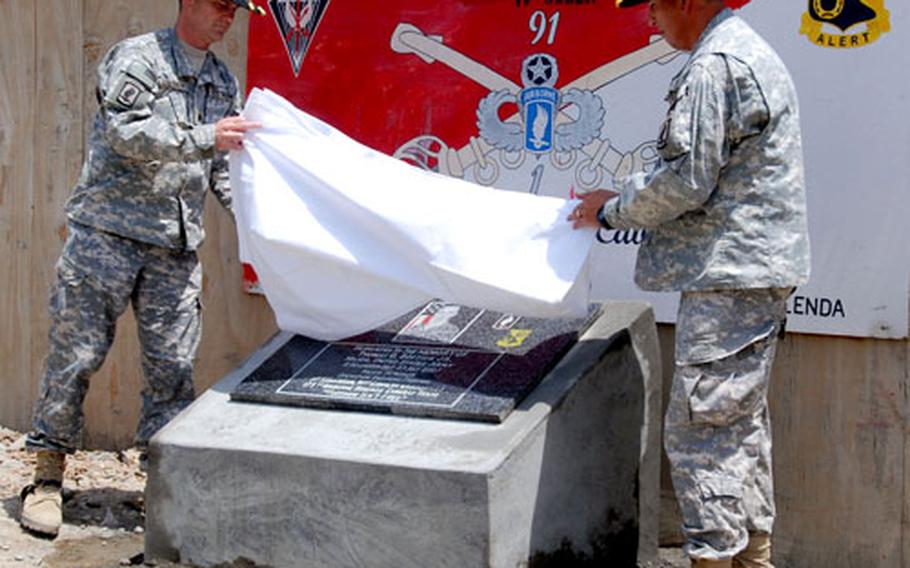 BAGRAM, Afghanistan &#8212; A forward operating base in Afghanistan has been renamed in honor of a soldier who was killed one year ago.

Bostick and Staff Sgt. William R. Fritsche were killed last July in Afghanistan when insurgents ambushed them after a meeting with local tribal leaders. At least 13 others soldiers were wounded in the firefight, officials said.

Last week, members of the unit and other military officials gathered to rededicate the base in Bostick&#8217;s honor.

"He died while saving the lives of his paratroopers against a numerically superior foe," Lt. Col. Christopher D. Kolenda, the 1st Squadron, 91st Cavalry Regiment commander, said at the ceremony, according to a press release.

"We dedicate this forward operating base to his legacy and memory. Let all who enter this base, and all who write or speak the name of it, be reminded that freedom is not free."

According to Kolenda, it was shortly after the ambush that village elders became tired of the fighting in the area, and pledged their support. A 100-man shura, or council, met and agreed to try to improve security.

"The price paid in blood that day has led to greater stability in one of the most violent districts in the country," Kolenda said. "[It has] set the conditions for the emergence of the 100-man shura, and has increased the safety and security of civilian and soldier alike in that region."

Two F-15 jets performed a flyover. A plaque dedicating the base to Bostick was unveiled near the base helipad.