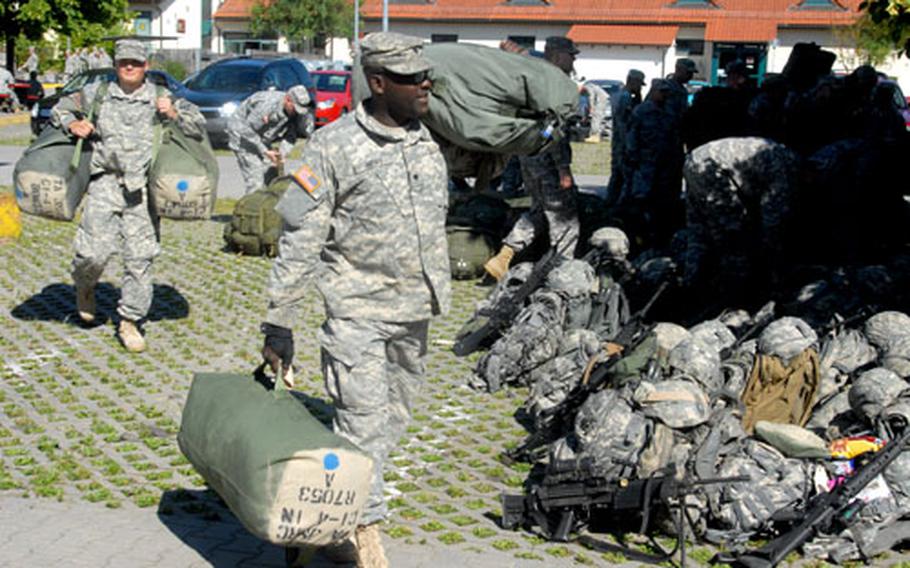 Soldiers from Company C, 1st Battalion, 4th Infantry Regiment load gear on a bus at Hohenfels, Germany, on Sunday for the first leg of a journey to Afghanistan. (Seth Robson / S&S)

HOHENFELS, Germany &#8212; At 43, Capt. Terry Howell is old enough to be a father figure for the young soldiers he&#8217;s taking to Afghanistan.

The commander of Team Cherokee &#8212; a company-size unit comprised mostly of members of Company C, 1st Battalion, 4th Infantry Regiment &#8212; can be dated by the photographs he left behind on the office wall in Hohenfels.

There&#8217;s a picture of his father in the sailor&#8217;s uniform he wore during the Korean War, and another of Howell in the outdated Battle Dress Uniform and Vietnam-era helmet he wore as an enlisted soldier before he went to Officer Candidate School.

The Mobile, Ala., native spent 2005 in Iraq and reached 20 years of service to qualify for retirement a year and a half ago. Why does he stay in?

On Sunday family and friends watched as Team Cherokee personnel loaded their bags onto buses for the first leg of their journey to Afghanistan. It will be the second deployment to Afghanistan in the last 18 months for Team Cherokee, but only about 15 percent of the soldiers going this time &#8212; mostly noncommissioned officers &#8212; were there the first time the unit went.

"Most of the others have been in the Army less than a year," Howell explained.

The lieutenants serving under him will have more responsibility than typical young officers on their first overseas mission.

Each will command a platoon of soldiers and run one of the FOBs &#8212; outposts in the Afghan back country that are normally reached only by weekly helicopter supply flights.

"For a platoon leader this is a once-in-a-lifetime opportunity," said 1st Lt. William Bradley, 24, who will command FOB Mizan when the unit arrives in country. "Not many of my peers are running their own FOBs."

The Hudson, Ohio-native got his commission through the Reserve Officer Training Corps after completing a degree in business logistics.

"My classmates went to places like UPS and DHL &#8230; different transport companies," said Bradley, who was eager to head to Afghanistan.

"Now you need this deployment experience [to advance in the Army]," he said. "We have been training so long. As an infantry officer you are in schooling for over a year. All this time you are training to fight insurgents or the Taliban. We have been fighting them for seven years. It will be interesting to see what these guys are capable of and what they are all about."

"You get much more responsibility in these missions than you would any time being a platoon leader. In many respects you are doing the job of a company commander," he explained

First Lt. Robbie Murray, 24, of Manassas, Va., will be in charge of the last Team Cherokee base &#8212; FOB Baylough, high in the mountains near the border with Pakistan. Murray doesn&#8217;t think the altitude will be a problem.

"At Ranger school we did a little mountaineering and I&#8217;ve done a lot of hiking in West Virginia. I get a thrill out of heights. I&#8217;m always into the extreme stuff," he said.

Spc. Brennan Brown, 22, of St. Angelo, Texas, is one of the few members of Team Cherokee who&#8217;s been downrange. He volunteered to go again.