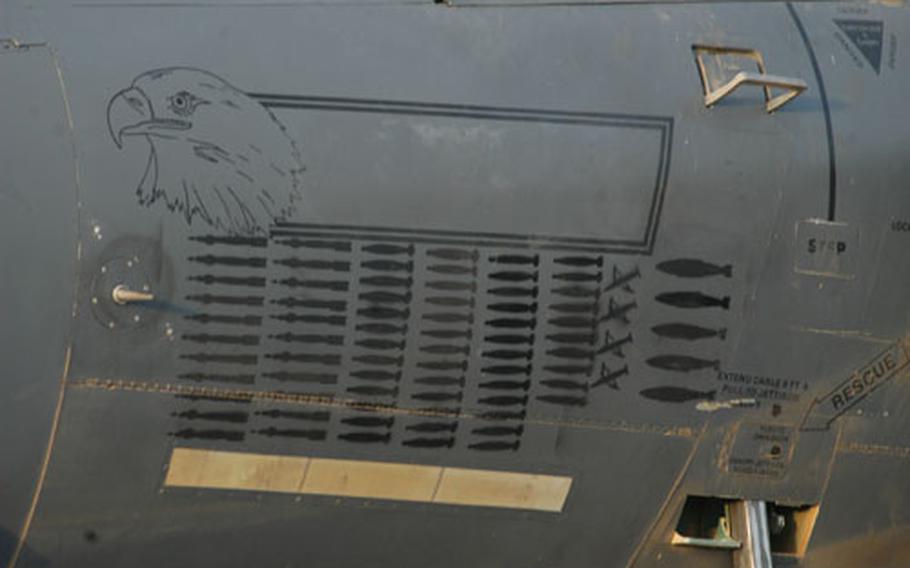 A collection of painted bombs adorn the side of a F-15E assigned to RAF Lakenheath-based 492nd Fighter Squadron. The paintings represent the number of bombs each jet has launched while deployed to Afghanistan. (Bryan Mitchell / S&S)

America&#8217;s role in two deadly friendly-fire incidents involving British troops during the wars in Iraq and Afghanistan have made that point all too clear.

The March 2003 death of Lance Cpl. Matthew Hull in Iraq and the Aug. 23 deaths of Pvts. John Thrumble, Robert Foster and Aaron McClure in Afghanistan highlight the dangers of air support and created tension at times between the United States and its closest ally.

NATO and U.S. officials declined to release the exact number of close-air support missions flown, but Air Force press releases from earlier this month indicate they are used frequently.

According to one release, there were 44 close-air support missions flown in support of NATO&#8217;s International Security Assistance Force and the Afghan security forces on Sept. 14 alone. There were 41 such missions on Sept. 4.

But some critics of coalition planning argue the most recent friendly-fire incident is the inevitable result of a less-than-robust Afghan counterinsurgency campaign in which jets in the sky are used to compensate for a lack of boots on the ground.

&#8220;There&#8217;s a tendency to think [friendly-fire deaths are] always a massive screw-up and a scandal, and sometimes it is,&#8221; said Stephen Biddle, a senior fellow for defense policy at the stateside Council on Foreign Relations.

On the cheap?Even before the most recent friendly-fire incident drew international headlines, the coalition was under pressure from the Afghan government over the inadvertent killing of civilians by airstrikes.

Afghan President Hamid Karzai has been among those calling for a re-examination of NATO airstrikes.

&#8220;All of our rhetoric about bringing democracy to Afghanistan isn&#8217;t going to matter much to somebody whose kids just got killed by an American bomb,&#8221; said Michael O&#8217;Hanlon, a senior fellow and military analyst at the Brookings Institution, a Washington-based think tank.

With roughly 50,000 combined U.S. and coalition troops patrolling a country the size of Texas with a resurgent enemy, close-air support has become a &#8220;second-best&#8221; option for the coalition.

&#8220;The big problem with [close-air support] in Afghanistan at the moment is that the West in general is radically short of troops by normal counterinsurgency standards,&#8221; Biddle said.

Close-air support played a significant role in the initial invasion and during Operation Anaconda in 2002, he said.

In Helmand province, where the British soldiers were killed, the British military regularly encounters fierce resistance, according to Paul Smyth of the U.K.&#8217;s Royal United Services Institute, a defense think tank.

Smyth tempers the risk of fratricide with the tactical advantage of close-air support.

&#8220;We mustn&#8217;t forget that there are lots of British soldiers who are safely at home today or in their units in deployed operations who have called in air support,&#8221; Smyth said.

The British Ministry of Defence did not respond to requests from Stars and Stripes to speak to British soldiers who have served in Afghanistan.

A last measureMembers of the 492nd were barred from speaking about the friendly-fire incident earlier this month pending the result of an ISAF investigation under way in Afghanistan.

British investigators were on hand at the 492nd headquarters on Bagram for their part of the probe.

But troops from the 492nd did speak generally about their role in providing close-air support.

Maj. Randy Haskin, a pilot, said dropping a laser- or satellite-guided bomb is often not the first option when intervening in a ground assault with an F-15.

Often the intimidation of a low-level flyover will suffice to ward off what the military terms &#8220;anti-coalition forces.&#8221;

The squadron also employs strafing via 20 mm high-explosive incendiary tracer rounds, fired from the six-barrel cannon in the belly of the jet.

Ideally, air intervention is done in conjunction with what the Air Force terms a joint tactical air controller, or JTAC &#8212; airmen embedded with ground forces to communicate with the jets to direct strikes, according to 492nd commander Lt. Col. Troy Stone said.

Some of the most perilous strikes occur when no JTAC is involved.

Regardless of the presence of a JTAC, the fighter jet officers run through a list of checks to ensure they strike the designated target.