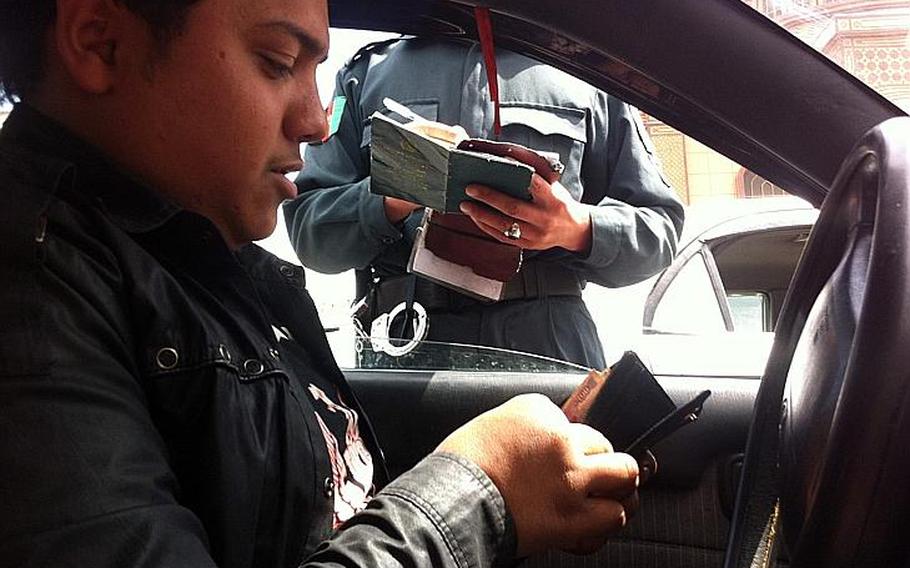 Buy Photo
A taxi driver prepares to pay about $5 to a Kabul Traffic Police officer who had questioned the validity of his driver's license in this file photo from April 2013. The officer issued no tickets and slipped the money in his pocket. For the second year in a row, Afghanistan rounds out the bottom of Transparency International?s Corruption Perceptions index, tied with North Korea and Somalia. (Heath Druzin/Stars and Stripes)

KABUL — Afghanistan once again leads the world in a dubious category: corruption.

For the second year in a row, Afghanistan falls at the bottom of Transparency International’s Corruption Perceptions index, tied with North Korea and Somalia. Afghanistan received a dismal eight out of a possible 100 points, the identical result in 2012, when the same three countries got the lowest scores.

Twelve years since American forces knocked out the Taliban regime in 2001, corruption in Afghanistan remains rampant and seems to be getting worse: The country has slipped in the Transparency International ratings since 2007, when it was eight spots from the bottom. Denmark and New Zealand tied for the status of least corrupt this year.

Transparency International is a Berlin-based organization that fights corruption. The index, which it has compiled since 2001, draws on surveys and assessments of corruption from a variety of institutions. This year’s index ranks 177 countries and territories. A score of 0 on the organization’s scale means a country is “highly corrupt”; a score of 100 means it is “very clean.”

From traffic police to high level officials, graft has become commonplace at every level of Afghan government and has sapped public support for the central administration, even as it needs it most. With international forces withdrawing, the Afghan military is facing an entrenched insurgency with less and less outside help, and corruption is undermining their efforts, said Yama Torabi, director of Integrity Watch Afghanistan.

“It is one of the major tools that the Taliban is using to discredit the Afghan government,” he said.

The continued corruption could have dire consequences for a country where international aid accounts for about 90 percent of government spending. The $16 billion in continued aid pledged by international donors at the Tokyo Conference in 2012 was tied to improvements in corruption and government transparency.

“Unfortunately, in the past 12 years, the massive corruption in the country has been a major hurdle for economical development,” he said.

Several corruption scandals have rocked the country, none bigger than that of Kabul Bank. The bank made hundreds of millions of dollars in fraudulent loans in a pyramid scheme that implicated many of Afghanistan’s elites, including several close to President Hamid Karzai. While a few bank officials were prosecuted and convicted, many of those implicated in the scheme, which nearly led to the bank’s collapse, were never charged with crimes.

Some observers blame corruption on the vast amount of international aid that flows into the country, often with few safeguards in place to make sure money ends up in the right hands. Karzai has accused the international community of fueling corruption.

“In terms of pressure and support to the Afghan government, the messages from donors have been quite mixed so far,” he said.