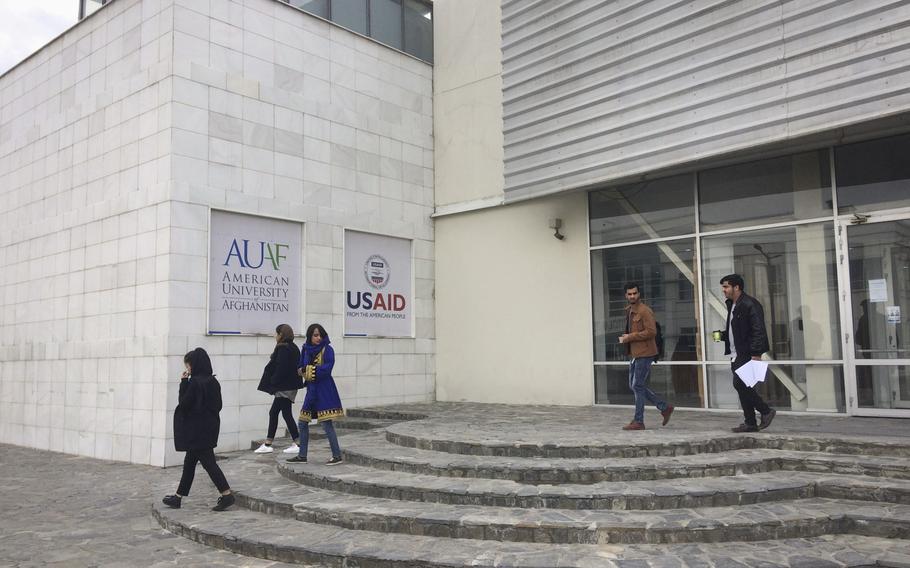 Men and women attend the American University of Afghanistan in Kabul on Sunday, March 8, 2020, where they study together — something that was forbidden under the Taliban. Greater rights for women have been among the most visible positive developments over the last 20 years in Afghanistan, with more than 3.5 million girls attending school and 100,000 going to university. (J.P. Lawrence/Stars and Stripes)

Men and women attend the American University of Afghanistan in Kabul on Sunday, March 8, 2020, where they study together — something that was forbidden under the Taliban. Greater rights for women have been among the most visible positive developments over the last 20 years in Afghanistan, with more than 3.5 million girls attending school and 100,000 going to university. (J.P. Lawrence/Stars and Stripes) Kamila Azizi, 18, talks about how to protect the gains made by Afghan women since 2001 while speaking at a conference to celebrate International Women's Day at American University of Afghanistan in Kabul on Sunday, March 8, 2020. (J.P. Lawrence/Stars and Stripes)

KABUL, Afghanistan — Afghan women fear their hard-won rights could be bargained away when government negotiators meet with the Taliban to map out the future of the country, female students at an American-backed university said Sunday.

Although many of those gathered at the American University of Afghanistan to celebrate International Women’s Day were too young to have experienced the terror inflicted on women by the Taliban when they ruled Afghanistan from 1996 to 2001, they knew they wanted to keep the rights women have gained since the Taliban were ousted by the U.S.-led coalition more than 18 years ago.

“(The Taliban) have to deal with the fact that women today are not the women they dealt with during the 1990s,” Kamila Azizi, 18, said in English. “They will have to make an adjustment."

Azizi exemplifies the gains Afghan women have made since the Taliban were forced from power. When she begins business studies at a local college, she will be one of more than 100,000 Afghan women who attend university — something denied them under the Taliban.

When the Taliban ruled Afghanistan, women were banned not only from getting an education but also from leaving the house without a male chaperone, from working, from accessing health care provided by a man, or from being involved in politics. A woman could be “flogged for showing an inch or two of skin under her full-body burqa, beaten for attempting to study, stoned to death if she was found guilty of adultery,” Amnesty International UK said in a 2014 report.

Today, women hold 28% of seats in Afghanistan’s parliament, a higher percentage of female representation than in the U.S. Congress, said New York-based Human Rights Watch. More than 85,000 women work as teachers, professors, judges, doctors and in other professions, U.S. officials have said.

The Taliban insist they have become more tolerant in the nearly two decades since they were forced from power, and that they support women’s rights, provided they fall within the “framework of Islamic values.”

But at the university gathering on Sunday, political science student Nekhat Sadeq, 19, said she doesn’t trust them to preserve the gains women have made.

A long-awaited peace deal signed a little more than a week ago by Taliban and American negotiators mandates a phased drawdown of American, NATO and foreign-partner troops from Afghanistan and a disavowal of al-Qaida and other terror groups by the Taliban. It also calls for intra-Afghan talks, due to start this week, that will include the Taliban and the government in Kabul.

But the deal, which the U.S. has said the Taliban violated within days of its signing, makes no mention of women’s rights.

Those are supposed to be on the agenda at the intra-Afghan talks, but Azizi worried the mostly male negotiators will barter women’s rights for peace.

“Just because we have the opportunity to negotiate with the Taliban, we should not sacrifice women’s rights,” she said.

At a meeting on the eve of International Women’s Day, U.S. diplomat Zalmay Khalilzad assured Afghan businesswomen that the U.S. was “committed to strong female representation at intra-Afghan negotiations,” and urged Afghans “to design a future … that honors internationally recognized values around the rights and roles of women.”

“Afghans have no nostalgia for the Afghanistan of the 1990s, nor does the international community,” Khalilzad said.