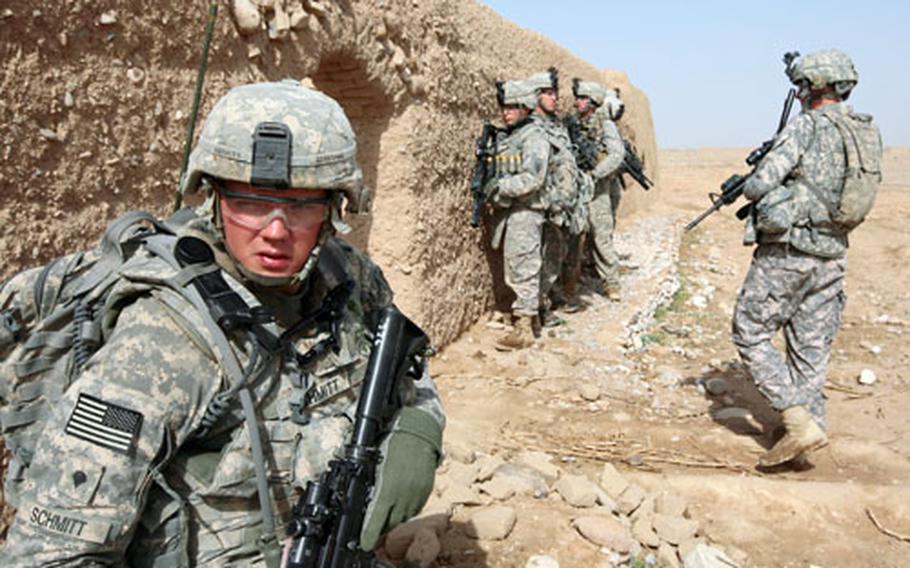 Spc. Jacob Schmitt, 20, of Grand Forks, N.D., and other soldiers from Company B, 2nd Battalion, 2nd Infantry Regiment take up security positions before searching a compound for Taliban arms and munitions in the villlage of Mowshaq, Maiwand district, Kandahar province, Afghanistan. The soldiers were carrying out the search after a series of nearby roadside bombings, but they found nothing in the village. (Drew Brown / S&S)

Spc. Jacob Schmitt, 20, of Grand Forks, N.D., and other soldiers from Company B, 2nd Battalion, 2nd Infantry Regiment take up security positions before searching a compound for Taliban arms and munitions in the villlage of Mowshaq, Maiwand district, Kandahar province, Afghanistan. The soldiers were carrying out the search after a series of nearby roadside bombings, but they found nothing in the village. (Drew Brown / S&S) 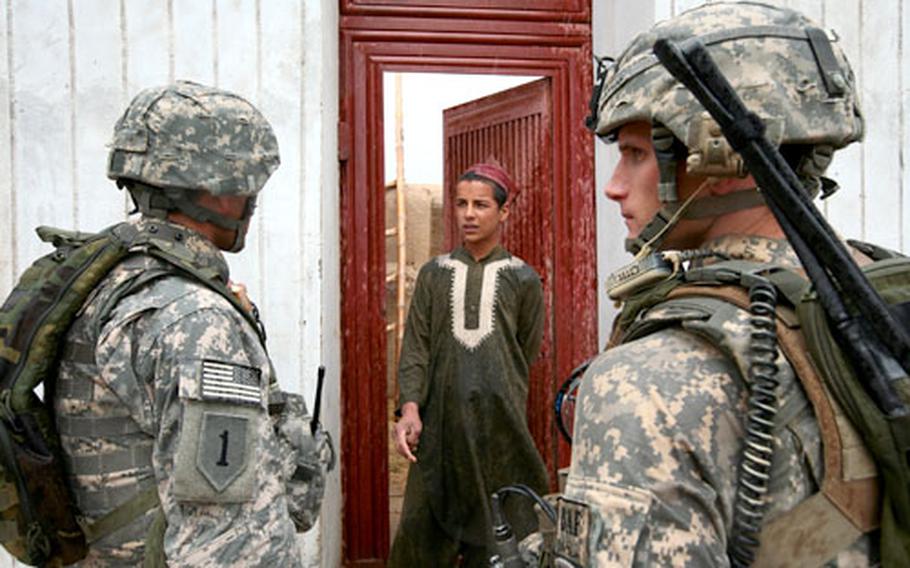 First Lt. Matt Pathak, 26, of Jacksonville, Fla., a soldier with Company C, 2nd Battalion, 2nd Infantry Regiment, talks to a boy in the village of Mazar&#39;eh, in Mazar&#39;eh, in Maiwand district, Afghanistan. The soldiers have spent most of their deployment on security operations and trying to gain the trust of villagers, many of whom are reluctant to cooperate. (Drew Brown / S&S) 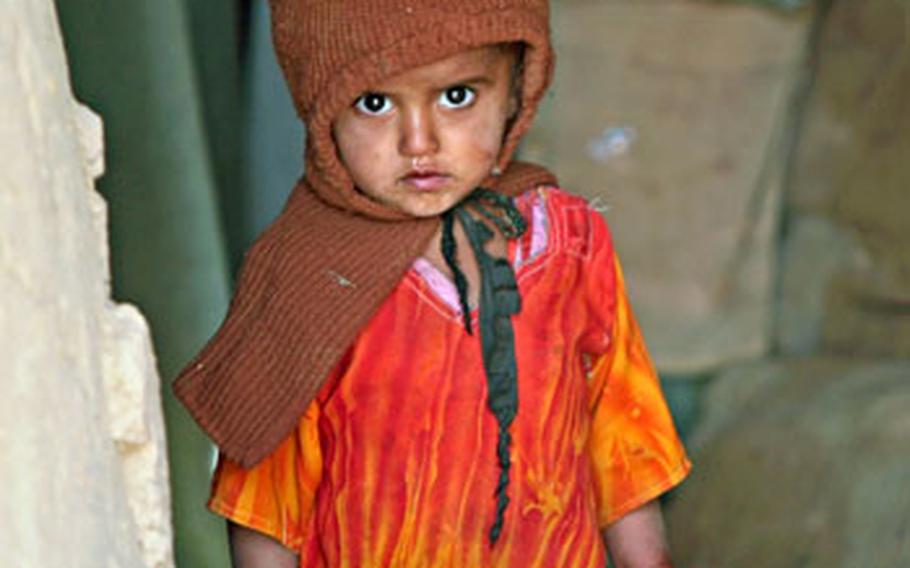 An Afghan toddler stares out from a mudbrick room as U.S. troops from Company B, 2nd Battalion, 2nd Infantry Regiment search her family&#39;s compound for hidden Taliban arms and supplies in the village of Mowshaq. (Drew Brown / S&S)

MAIWAND DISTRICT, Afghanistan &#8212; Several mines had exploded or been found along a route patrolled by soldiers from Company B, 2nd Battalion, 2nd Infantry Regiment. Nobody had been hurt, but something needed to be done to deter further attacks.

So last week, a platoon under 2nd Lt. Jason Schlachter went out to search the village of Mowshaq, about 10 kilometers north of the battalion&#8217;s main base in Kandahar province.

Schlachter and a squad under Staff Sgt. Tyler Dennee waded through waist-high wheat to reach the first sprawling compound. Three Afghan teenagers came forward with their arms raised. They seemed eager to cooperate.

One identified himself as the property owner&#8217;s son. Schlachter explained through a translator about the bombs. He asked for permission to search the property.

"Sometimes the Taliban make people keep stuff in their houses, even when they don&#8217;t want to," said Schlachter, 23, of Dallas. He asked the boy to gather up the women and children first.

As Dennee and his squad carried out the search, an old man walked over and introduced himself as the boy&#8217;s father. The old man professed to know nothing about the mines.

"We are innocent people," he said. "We never see bad guys or anything."

The search turned up nothing, and the old man excused himself. Schlachter and the soldiers prepared to move on. He thanked the boy for his cooperation. Perhaps the next time they returned, the boy could pass along anything he might have learned about the Taliban, Schlachter said.

The young man had his own request.

"Maybe when you come back, you can give us an ID card that says we are good people," he said. Schlachter said he&#8217;d see what he could do.

While the rest of the patrol was just as uneventful &#8212; additional searches turned up no Taliban weapons or supplies &#8212; the mission was emblematic of many challenges that U.S. and other NATO forces face in southern Afghanistan.

As the Pentagon dispatches another 17,000 troops to Afghanistan in coming months, many of them will be destined for Kandahar and other southern provinces. Southern Afghanistan is the Pashtun heartland of the Taliban insurgency, and U.S. forces will confront a population that, if not overtly hostile, will likely be largely indifferent to their presence.

For years there has been little incentive for most civilians to cooperate with foreign troops in the region, where NATO forces number only about 23,000.

Maj. Gen. Mart de Kruif, the Dutch commander of those troops, told Pentagon reporters last month that NATO troops control only about 60 percent of the populated areas in southern Afghanistan because of the lack of soldiers.

It will likely take U.S. reinforcements until the end of the summer to be fully in place. The strategy then will be to expand the areas under NATO control and go more aggressively against insurgents, according to military officials.

But if the experience of 2nd Battalion, 2nd Infantry Regiment is any indication, doing so will not be an easy task.

The soldiers deployed to Maiwand, about 40 miles west of Kandahar, last September. It was the first large-scale posting of foreign troops in an area described as an important transit route for Taliban fighters, money and weapons.

Lt. Col. Dan Hurlbut, commander of 2-2 Infantry, told Stars and Stripes in January that he initially anticipated spending three to four months on security operations before shifting to development. Instead, the focus has remained on security.

Platoon leaders spend a lot of time trying to identify and reach out to important figures when they patrol the villages, more than a dozen of which are scattered across Maiwand, a district of about 15,000 people. Some villagers have cooperated, but most have been unwilling to do so. The battalion is supposed to go home in June.

"While they like to talk to us, they don&#8217;t want to cooperate," Hurlbut said in recent interview. "They&#8217;re still hesitant to show any outward signs of having anything to do with the coalition."

Mullah Masood, the government-appointed leader for Maiwand, recently estimated that 80 percent of the district&#8217;s people were satisfied with the increased security that U.S. troops and Afghan forces have brought. But that sentiment has not translated into active support.

"We&#8217;re still too new," said Capt. Trevor Voelkel, 28, of Brenham, Texas, the commander of Company C. "The feeling that we&#8217;re not going to stay the course here is still floating around. People are still waiting to see where they are going to place their allegiances."

Because of security concerns, the only significant development project the battalion has undertaken is the construction of a new government center. Local contractors hired by U.S. forces finished two buildings that were abandoned in 2003, and two new buildings are slated to be built.

The $600,000 to $700,000 project will eventually house new offices for the district government and police, plus a mosque, a meeting hall and a dining room. Additional plans call for the completion of a new model school.

It&#8217;s been a constant battle with the Taliban for influence. The soldiers have sought to establish good relations with local religious leaders by providing new Quran, prayer rugs and carpets for several mosques. At one of them, the Taliban showed up five days later and stole the items, Hurlbut said.

The enemy themselves remain elusive. "Wherever we go, the Taliban leave," he said. "It&#8217;s been a game of cat and mouse."

There have been few firefights. Mines and makeshift bombs are the Taliban&#8217;s favored method of attack. Casualties have remained low, primarily because the battalion switched out its Humvees for more heavily armored Cougars and Buffalos soon after it arrived.

Recent operations, some carried out with special operations forces, have eliminated several bomb makers in the district. One of them, in early March, killed eight men after a Canadian aerial drone spotted them trying to plant explosives.

Many Taliban leaders in the region have now left as a result of the raids, Hurlbut said. "They think they have a spy or a coalition informant in their midst."

Still, as the mines near Mowshaq recently demonstrated, the threat has not been eliminated entirely.

It took nearly two hours to reach the village. The dirt track snaked crazily through the desert, skirting dry riverbeds and fields and passing through several villages. The soldiers stopped occasionally to search on foot for mines.

The Cougars and Buffalos have saved lives, but on this mission they seemed ill-suited for the rough Afghan terrain. Recent storms had left the ground muddy, and one of the massive trucks got stuck. Soldiers dug it out with shovels.

For more photos, see the link at the top of the story.