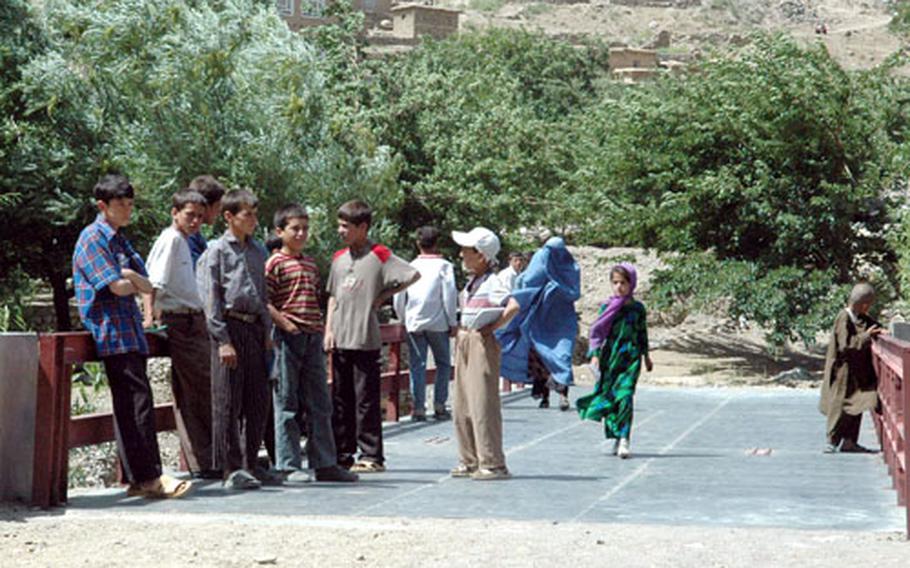 Young Afghans gather on the newly finished bridge outside of Nawaj, Afghanistan, on Tuesday. The bridge was built by local contractors using funds from the Bagram Provincial Reconstruction Team. (Leo Shane III / S&S)

Young Afghans gather on the newly finished bridge outside of Nawaj, Afghanistan, on Tuesday. The bridge was built by local contractors using funds from the Bagram Provincial Reconstruction Team. (Leo Shane III / S&S) 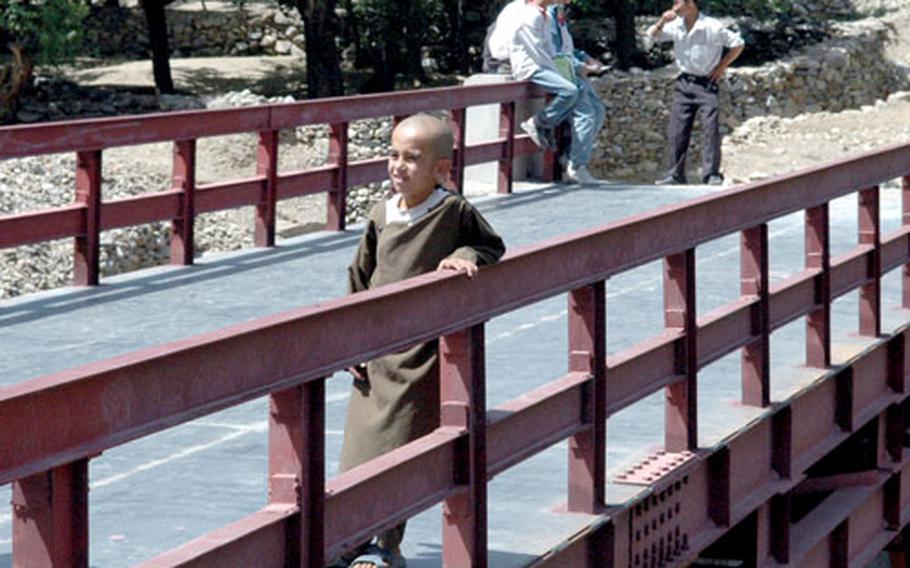 A young Afghan boy waits for a friend to catch up after running across the newly finished bridge outside Nawaj, Afghanistan, on Tuesday. (Leo Shane III / S&S) 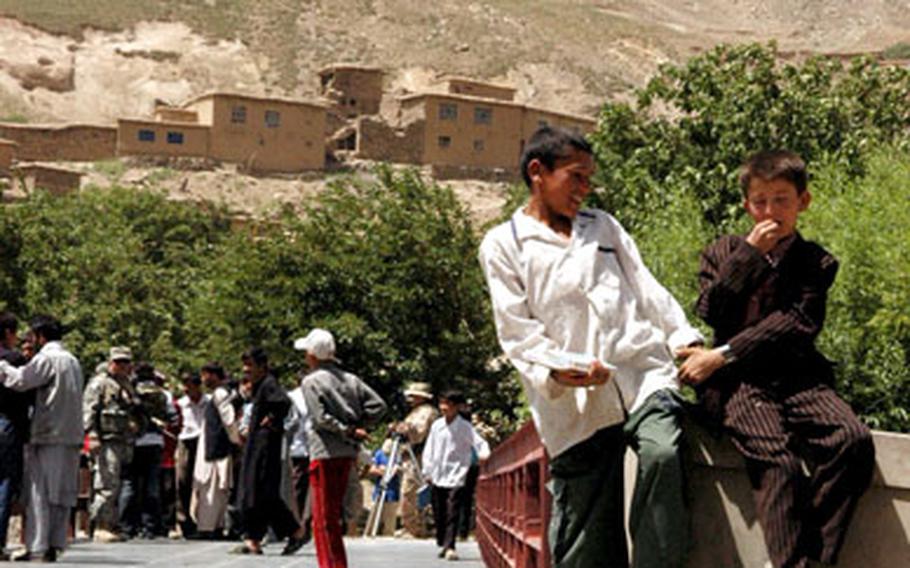 Two friends play at the edge of the newly finished bridge outside Nawaj, Afghanistan, on Tuesday. (Leo Shane III / S&S)

NAWAJ, Afghanistan &#8212; Army Sgt. Michael Sottile never got to set foot on the new bridge officially opened outside this Parwan province village on Tuesday, but he enjoyed the event nonetheless.

&#8220;Things like this are really good to see,&#8221; said the Connecticut National Guardsman, cracking a smile from his guard post atop his Humvee. &#8220;We just come out here to make sure all the (reconstruction) teams are all safe. But this is good. Opening schools is even better, because of all the excited kids.&#8221;

Tuesday&#8217;s event was a fairly minor one for the Bagram Provincial Reconstruction Team, charged with helping fund and supervise reconstruction projects in the greater Kabul area. Among the more than $5.2 million in Parwan projects planned and currently under way, the Nawaj bridge cost only about $37,000 to rebuild.

But the excited locals said the 30-foot span will be a major boost for the area. Those on the west side previously had only limited access to the major highway on the east, and any motorists wishing to get from one bank to the other had to travel several miles north to find a passage.

&#8220;Now it will be very easy to travel from one side to the other,&#8221; said Gulam Sedeeq Sedeeq, deputy governor for the province. &#8220;On the other side of this river, there are 700 families who will use this bridge. Economically, this will be important.&#8221;

Members of the PRT were happy, too. The conversion from a failing footbridge to a reinforced vehicle span took nearly 15 months to complete, but they called the finished product &#8212; done entirely by Afghan contractors &#8212; the kind of success story they like to tell.

For Sottile and other troops who escorted the PRT members to the event, the day was a chance to feel good about their work. Sottile said they travel with reconstruction teams, civil affairs units and other diplomatic groups, but always to provide security and rarely to celebrate with the locals.

Even though most of them kept watch several yards away from the structure, they did get some of the celebratory lunch made for the local elders and received plenty of &#8220;thank-yous&#8221; from the locals.

Afghanistan government officials have set a goal of connecting 40 percent of all villages in the country to easily accessible roads by 2010. Sedeeq said he expects locals to begin work on new connectors from the Nawaj bridge to other local roads in the near future.