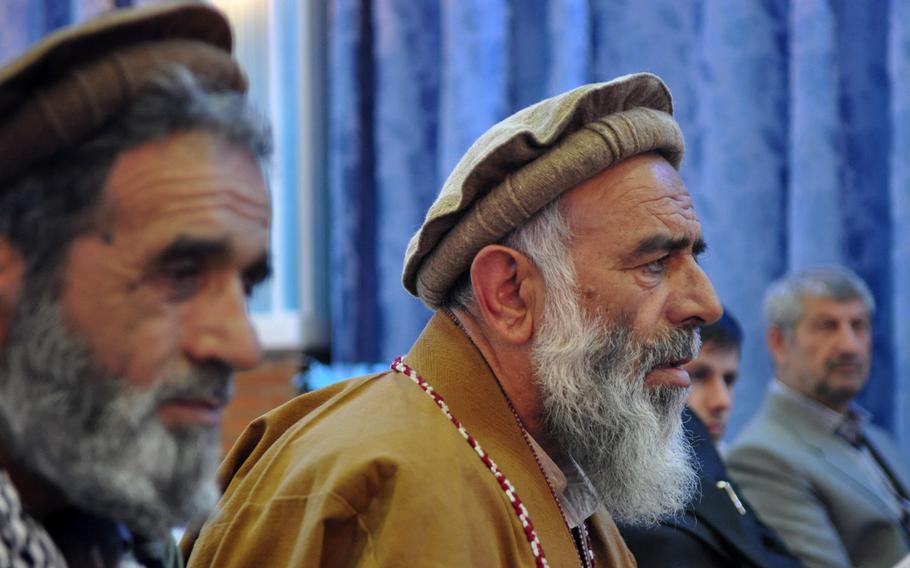 Mohammad Ali, foreground, and Abdul Malik Hamwar recall memories of their days fighting Soviet troops during the 1980s. The pair joined hundreds of other former mujahideen, as well as younger admirers at an event commemorating the Soviet withdrawal. (Josh Smith/Stars and Stripes)

Mohammad Ali, foreground, and Abdul Malik Hamwar recall memories of their days fighting Soviet troops during the 1980s. The pair joined hundreds of other former mujahideen, as well as younger admirers at an event commemorating the Soviet withdrawal. (Josh Smith/Stars and Stripes) 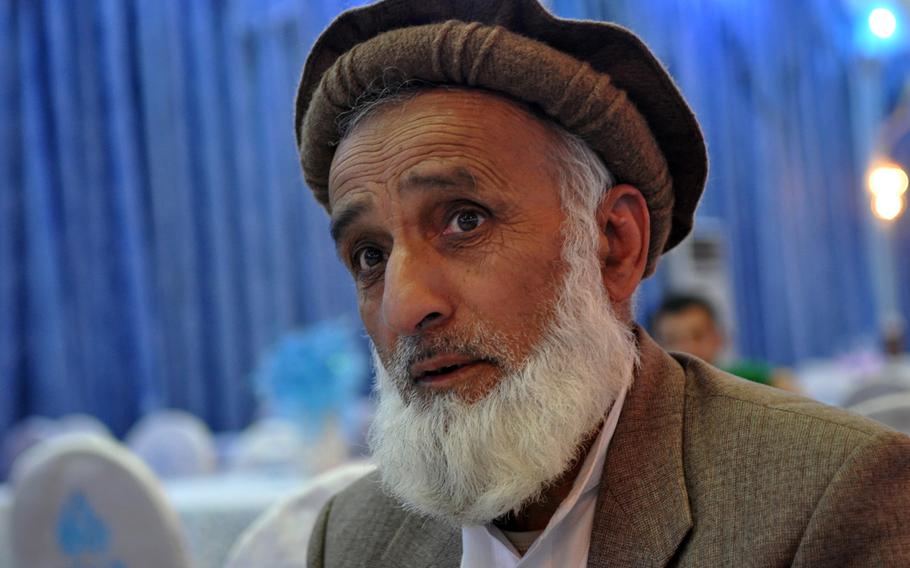 Said Abdul Ghaffar, a former mujahideen, recalls fighting against Soviet troops and the communist Afghan government during the 1980s. Ghaffar joined fellow former fighters at an event in Kabul commemorating the Soviet withdrawal from Afghanistan. (Josh Smith/Stars and Stripes) Former mujahedeen Feroz Omaidwar, left, Mohammad Ali, and Abdul Malik Hamwar joined hundreds of other former fighters, as well as younger admirers at an event commemorating the Soviet withdrawal from Afghanistan in the 1980s. (Josh Smith/Stars and Stripes)

KABUL — One by one, gray-bearded veterans ambled into the powder blue confines of the Uranus wedding hall Sunday to mark a bittersweet anniversary.

Some strode in flanked by heavily armed security; others hobbled alone, missing legs and propelling themselves on crutches. They gathered to mark a decades-old victory over the Soviet Union, but many expressed disappointment over a fight unfinished.

“The main aim of the jihad was to defeat the USSR and bring an independent government and create a free Afghanistan,” former Northern Alliance political emissary Abdul Malik Hamwar said. “Unfortunately because of interference by foreign countries and internal hands, the whole effort was ruined.”

Sunday was Mujahid Day in Afghanistan, a national holiday to celebrate the Afghan Mujahedeen’s military victory over the Red Army, the culmination of a 10-year struggle that many believe hastened the demise of the Soviet Union. But Afghanistan’s victory was short-lived, and the country quickly descended into civil war.

Now, more than 20 years after the Soviets withdrew, the country still is wracked by war and many former anti-Soviet fighters from the north now fight with the government against former comrades from the south and east who joined the Taliban.

Mohammad Hamimi joined the fight against the Soviets in his 20s and rose to become a commander under famed Northern Alliance leader Ahmad Shah Massoud, who later battled the Taliban in northern Afghanistan. Hamimi later became governor of Logar and Badakhshan provinces. He said the time of jihad, or holy war, against the Soviets were days of high morale and hope for the future, despite daily privations and the constant threat of death from the better-armed Soviet army and air force.

“Thirty-two friends were killed in a single day, but there was not a single tear shed because they died for the goal of making their country free,” Hamimi said.

Now 55, with a healthy dose of gray in his close-cropped beard, Hamimi is worried the fight was for naught. He blames the civil war of the early 1990s and America’s failure to crush the Taliban early after their invasion of Afghanistan in 2001.

“The [civil] war ruined everything and definitely everyone gets frustrated with this situation,” he said.

Even the crowd that gathered Sunday at the wedding hall showed how much the Afghan population had fractured since the days of a nation unified in a fight against a common enemy. The hall was filled with members of the Northern Alliance, a group of fighters largely made up of ethnic Tajiks, who fell out with their Pashtun and Hazara comrades after the Soviet war. Those divisions persist today, fueled by bitter memories of the civil war in the early 1990s that brought street-by-street fighting to Kabul and left tens of thousands dead.

Zaidullah Ghayani, president of the Mujahedeen High Council — a group that advocates for veterans of the Soviet War — said his fellow fighters had high hopes that their victory would bring lasting peace to Afghanistan and are dispirited at the state of the country.

“Our leaders were not able to maintain that achievement,” he said. “All our ambitions were mixed with dirt.”

Even amid lofty speeches from politicians about the achievements of the mujahedeen and the state of Afghanistan, the former fighters in attendance said they are concerned about the future of their country.

“Muslims always have hope from God, but with this situation, we don’t know what will happen,” Hamwar said.