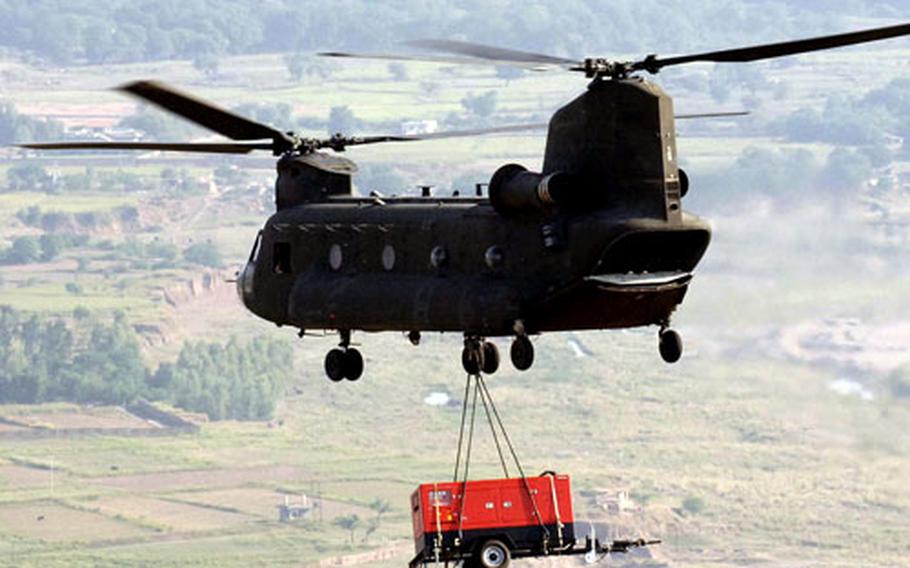 Chinooks assigned to Task Force Storm were involved in a lot of battles during their yearlong stint in southern Afghanistan. But they also performed other roles, such as providing humanitarian assistance to earthquake victims in Pakistan as shown in this picture. (Courtesy of Task Force Storm)

KANDAHAR AIRFIELD, Afghanistan &#8212; There are some similarities between southern Afghanistan and the Nevada deserts.

&#8220;I think we were probably ready for it more than most units,&#8221; said Chief Warrant Officer 4 Dan Manciu, a member of the Oregon National Guard CH-47 Chinook pilot, who was part of a task force that included Nevada Guardsmen during a yearlong deployment.

And the pilots and crews on the Chinooks, UH-60 Black Hawks and AH-64 Apaches that made up Task Force Storm had more to worry about than the terrain and weather.

&#8220;We weren&#8217;t ready for the RPGs (rocket-propelled grenades) and bullets,&#8221; said Staff Sgt. Dean Penrod, a member of the Nevada National Guard and a Chinook flight engineer.

Crews from 3-158 already have left the country, and Apache and Chinook crews are ready to hand over their missions to counterparts from the 10th Mountain Division in the next few days.

Task Force Storm was half of Task Force Griffin, the Army aviation task force in country. But like the units on the ground in southern Afghanistan, those in the air have seen more combat in the last year than their counterparts to the north.

Chief Warrant Officer 3 Thomas Higgins, an Apache pilot, said there were several times that firefights ended only because his helicopter ran out of missiles and bullets to fire.

Manciu, Penrod and other members of the Chinook crews worked with ground-based troops more than they expected. Both said they had some training on landing troops in the middle of a fight. But Chinooks carried out more than 150 such deliberate assaults during their stint in the country.

One of those cases proved to be fatal for the crew. On Sept. 25, Mustang 2-2 had just finished dropping off 30 soldiers. It was shot down while trying to leave the battlefield. All five crewmembers died.

Another Chinook was lost when it caught fire after landing under enemy fire. The crew escaped. An Apache went down while training up north. Very few helicopters of any make made it through the year without taking at least one hit. But most were soon out flying again after getting patched up. Mechanics had enough to do without the bullet damage.

Spcs. Timothy Brown and Thomas Haun, crew chiefs for the Apaches, said the work was accomplished by all of those on the ground pitching in to help.

Capt. Michael Stone said the medical unit flew 357 missions over the last year, bringing 544 patients to medical care. Many of those were local nationals needing urgent medical care. Stone said none of the medevac helicopters had been hit.