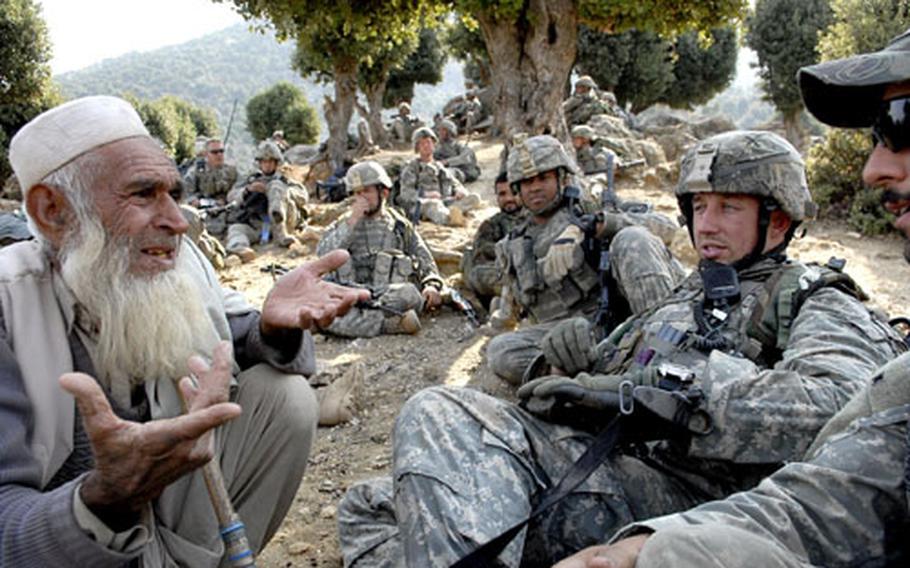 U.S. Army Capt. Louis Frketic, 29, of Jacksonville, Fla., (right, no sunglasses) listens as an Afghan man talks about the hardships of living in the mountainous terrain of Kunar province in northeast Afghanistan. (Les Neuhaus / S&S)

MANAGAI MARKESS, Afghanistan &#8212; There are worse places to be in a war than Afghanistan.

The wars in Iraq, Somalia and the western Sudanese region of Darfur, for example, are waged against backdrops that are both parched and apocalyptic.

But that is not the case with the northeastern corridor of Afghanistan, which stretches along the Pakistan border. An endless patchwork of jagged mountains in the east pushes ever northward into the famed Hindu Kush, just beyond the Khyber Pass, and is home to the U.S. Army&#8217;s 173rd Airborne Brigade.

Parts of the brigade hike the trails of four provinces &#8212; Lagman, Nangarhar, Nuristan and Kunar &#8212; in search of al-Qaida and Taliban operatives. It&#8217;s a network that reaches deep into the hundreds of valleys and mountain peaks of this region.

They had been on the offensive against Taliban militants holed up in the Pech River Valley, which meanders and winds throughout the volatile Kunar province.

All the while they were in combat mode, as the &#8220;ex-filtration&#8221; of the operation involved searches and keeping on general alert.

The walk took the men of Company A, led by Capt. Louis Frketic, 29, a native of Jacksonville, Fla., more than 10 hours. By the end, everyone was exhausted, with some just barely able to finish, having run out of water by the end of the trail.

Throughout the day, U.S. Air Force F-15 jet fighters also screamed by, with a constant pitter-patter of helicopter blades swirling within earshot.

Negotiating the trails required teamwork from the troops. Communication was crucial between companies descending different mountain peaks at the end of an operation.

They rested when they came across local Afghan villagers. They exchanged traditional greetings but also peppered the Afghans with questions about the Taliban.