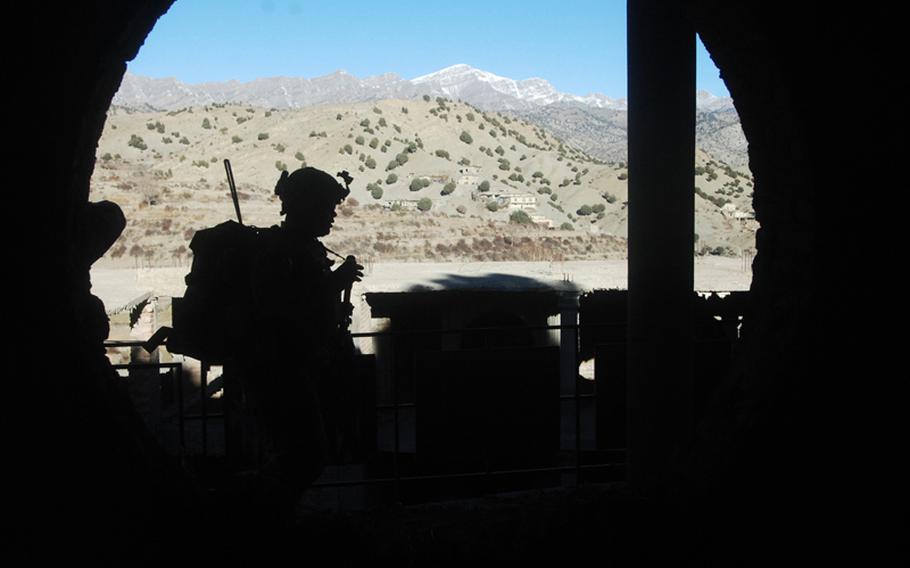 KHOST PROVINCE, Afghanistan — Several months after a suicide bomber struck an Afghan Border Police checkpoint near a bazaar here, a U.S. Army platoon leader stopped by for a visit.

The police had rebuilt the checkpoint, and they had begun expanding it, adding raised platforms with sandbagged posts on the corners. They needed more Hescos, they said — the stout, steel-reinforced barriers essential to U.S. bases.

The platoon leader, 2nd Lt. Scott Oplinger, congratulated the men on their rebuilding. But he hesitated on the supplies.

“I can’t promise the Hescos,” he said, “so don’t make any drastic changes yet.”

Those words — “I can’t” — are becoming more common on joint bases across eastern Afghanistan. As the U.S.-led coalition prepares to end its combat role, it is withholding resources it once eagerly provided Afghan security forces in the fight against insurgents, from compasses and construction materials to air support.

Among the most significant changes described by U.S. officials in this border province are new restrictions on medical evacuations of Afghan forces by coalition helicopters. New rules in Regional Command-East, which includes Khost, limit evacuations to the most serious injuries — those threatening life, limb or eyesight — and require approval from higher echelons, according to several officials with knowledge of the rules. A coalition member must visually confirm the seriousness of injuries, officials said.

The changes mean that, after years during which coalition helicopters frequently picked up Afghan casualties during joint operations, Afghans must rely on their ground ambulances as they conduct more independent operations despite maintenance problems and poor road networks in dangerous terrain.

Coalition advisers and commanders say the new emphasis is necessary to push Afghan forces into solutions they can afford and maintain — “Afghan-sustainable” is the preferred term — as they assume responsibility for security and Western militaries depart.

“It sounds like a talking point, but it really has to be a mantra,” said Maj. Robert Jones, who heads a team of advisers to an ANA battalion in Khost.

It is jarring, and the gaps between Afghan forces and coalition units are growing starker.

At Camp Parsa, the Afghan side of a joint coalition-ANA base in this border province, the ANA brigade tactical operations facility, once a nerve center of digital maps and video surveillance, is now mostly empty.

In October, an Army cavalry squadron headquarters moved to the U.S. side of the post, known as Camp Clark, leaving Afghans with a handful of computers and several paper maps on the wall.

Surveillance video from the blimp suspended over the joint base now feeds into the squadron operations center alone. The squadron commander, Lt. Col. Donald Evans, said all significant information is shared with the Afghans. “We still have all that capability, and if we see something that concerns them, it’s an immediate call to their (U.S.) adviser,” he said.

Maintenance issues on combat outposts go unattended because Afghans are unable to get parts and often don’t know how to make repairs, said Maj. Todd Smith, an adviser to garrison leaders at Parsa. Many of the machines and buildings provided to Afghans were made to Western standards, he said.

“The question becomes, do you repair this to the best of your ability, or do you tear it down and rebuild it as an Afghan unit?” Smith said.

The challenge is visible in a former U.S. Army post known as Combat Outpost Deysie in the Khost mountains. Built in 2008 and named after a private killed in the region, the small, austere outpost was handed over to a nearby ANA battalion last summer.

“If you’re drawing water out of the creek, you’re not getting a potable water supply,” said Capt. Kyle Trottier, commander of a nearby U.S. cavalry troop that works with the Afghan units at the outpost.

Even small provisions are being withheld in an effort to force Afghan National Security Forces to overcome one of its greatest deficiencies — a lack of logistical planning.

An artillery battery at Parsa recently waited to receive simple compasses for its forward observers, even though advisers could easily provide them.

The medical evacuation rules are being implemented regionally, as Afghan units can manage them, a coalition spokesman said. The new restrictions mark a shift from years past, when resources were ample and coalition soldiers were in the lead, Capt. Dan Einert wrote in an email.

Officials in Khost said a colonel must currently approve medical evacuations under the new rules. Come spring, a general officer will have to do so, they say.

Neither Einert nor a spokesman for International Security Assistance Force headquarters would confirm the wording of recent changes, and they did not say in which regions they have been implemented.

Afghan forces in RC-East have already seen the effects of the changes, implemented there in the fall, according to officials.

After a roadside bomb struck a dismounted ANA soldier near Parsa in November, injuring his head with shrapnel, Afghan forces dispatched a ground ambulance. It turned over on its way, injuring a soldier inside.

Both men — the soldier injured in the blast and the one in the ambulance — were then rushed by ground to the Parsa clinic. A coalition surgeon called for a medical evacuation, sending both to Bagram Air Field, where they were stabilized.

Whether a coalition helicopter was available for dispatch, and whether it would have made a difference in treatment, wasn’t immediately clear.

Afghanistan appears to be years away from developing an air force capable of regular casualty evacuation or combat air support. While coalition trainers say they’re focusing on evacuation as a primary role of the force, recent setbacks have pushed the expected stand-up date from 2014 to 2017, according to media reports. A lack of qualified candidates for the force has been another concern.

Defining what is “Afghan-sustainable” poses challenges in a country where fewer than a third of citizens can read and where a rapid expansion in the number of Afghan security forces has outpaced the government’s capacity to sustain them.

According to a December report by the Pentagon, Afghans are still in the early stages of basic supply planning and forecasting, despite a year in which logistics was made a training focus.

Unreliable communications, treacherous roads and a lack of independent decision-making among leaders hamper the ability to supply soldiers. Broken trucks await parts; Afghans sometimes take the batteries out for electricity, which is available only sparingly at many outposts.

Fuel distribution to far-flung outposts like the former Deysie is unreliable, Americans say. Because the post is the last on the supply route from Parsa, it often receives the least amount of fuel, they say.

As with the lack of vehicles, low fuel supplies becomes a safety issue, Jones said. Soldiers at the former Deysie were burning wood for heat — inside wooden barracks.

“It’s a fire waiting to happen, but they’re [doing it] out of necessity,” Jones said.

Contracting for services, meanwhile, is made difficult by a lack of know-how on the part of Afghans as well as an inability to forecast each year’s budget, which relies on foreign donations.

For Afghan commanders, the integrity of their force is at stake. Lt. Col. Ahmad Jaan-Safi, commander of the ANA 5th Combat Service Support Kandak at Parsa, said a lack of air support is a huge concern.

“Lack of helicopters means the person who got injured or wounded is going to stay out there more than a day, could lose more blood and die,” he said. “That leads to a loss in morale and people leaving the army.”

Coalition commanders and advisers respond with a common analogy — that of a parent cutting support to a grown child.

“Personally, it’s heartbreaking seeing that guy sitting there and screaming and thinking, ‘God, are we going to help that guy?’ ” he said. “… At the same time, we have to respect their ability to help their guy.”