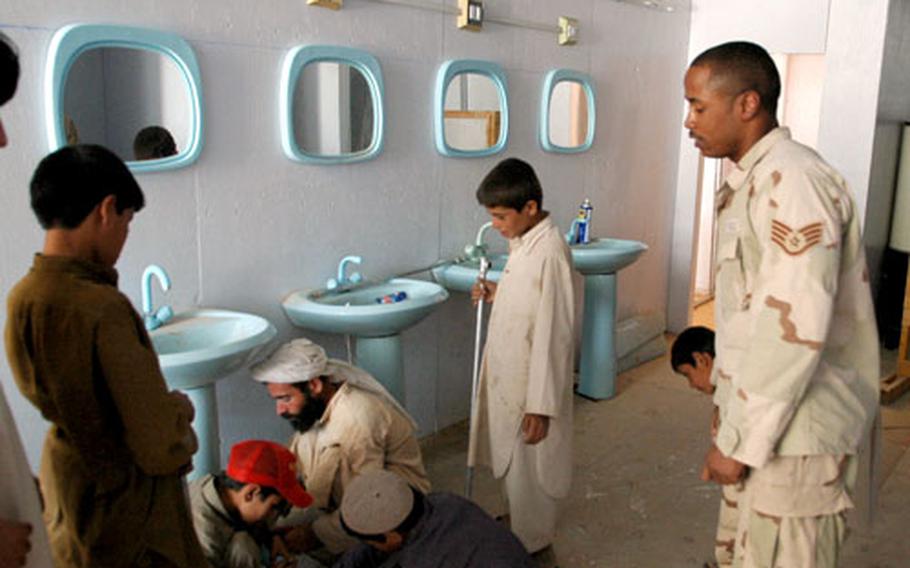 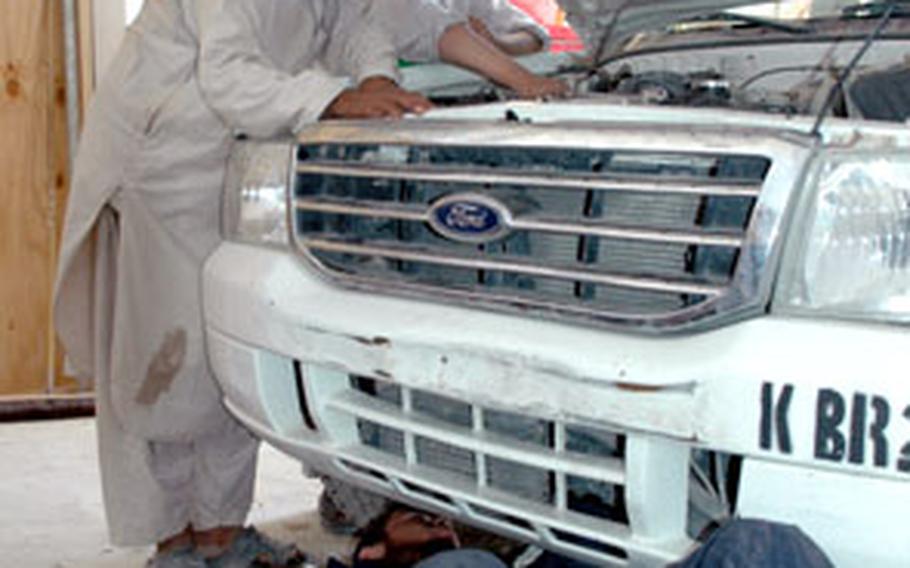 A group of Afghan students on Tuesday work on leaky lines in a truck during classes run by the Qalat provincial reconstruction team. (Leo Shane III / S&S)

What he doesn&#8217;t always have are students who can read.

&#8220;Out biggest challenge here is always the level of education,&#8221; said Ball, one of the U.S. instructors with the Qalat provincial reconstruction team in southeastern Afghanistan. &#8220;We had a whole class of Afghan National Army soldiers in here, and most of them had never graduated high school. This is a three-hour course each day. You could see they couldn&#8217;t read, and they couldn&#8217;t stay focused for that long.&#8221;

Members of the PRT, operating from a compound on the edge of Qalat, say they&#8217;ve been able to make great strides with their trade school classes over the last 15 months, giving hundreds of locals the foundation for a professional career.

But most of the classes are still limited by how much the under-educated Afghan population can learn. Officials say many of the adults who attend lack basic knowledge of biology and chemistry, making things like electrical work and nursing classes a tremendous challenge.

&#8220;The Taliban was so opposed to education that many of these people just have nothing,&#8221; said Maj. Mark Regan, commanding officer of the PRT. &#8220;We try to cover everything we can from the basics to advanced courses.&#8221;

Some have been more successful than others.

Sgt. Robert McClellan, of the 70th Troop Command, has the technical background to run the computer classes himself but has been able to find four local instructors with enough knowledge of word processing and networking to take over most of the actual teaching.

About 80 students take one of the five available computer courses, and lessons use locally bought laptops. Many of the students are teenagers or younger, McClellan said, and several have already qualified as entry-level technicians.

Over at the electronics and plumbing classes, Staff Sgt. William Johnson, of the 9th Logistics Readiness Squadron, said in three months he has seen his young students install overhead lighting, install a set of sinks and lighted mirrors, and even practice some carpentry skills. Next up will be tackling a temperamental water heater.

Jailani Khan, a local interpreter and instructor who works with Johnson, said after these classes finish the students will easily be able to find jobs in the community. The PRT not only certifies their skills but also awards them a set of basic electrical and plumbing tools to get them started.

The auto repair shop and welding classes report similar success and enthusiasm. But, much like the nursing and EMT classes, each also reports that the education difference between the average Afghan and the typical U.S. servicemember creates some confusion and frustration.

Ball said he expects his next set of students, who started this week, to be a bit easier to teach. Most are teens still in school, looking for potential jobs at local hospitals.