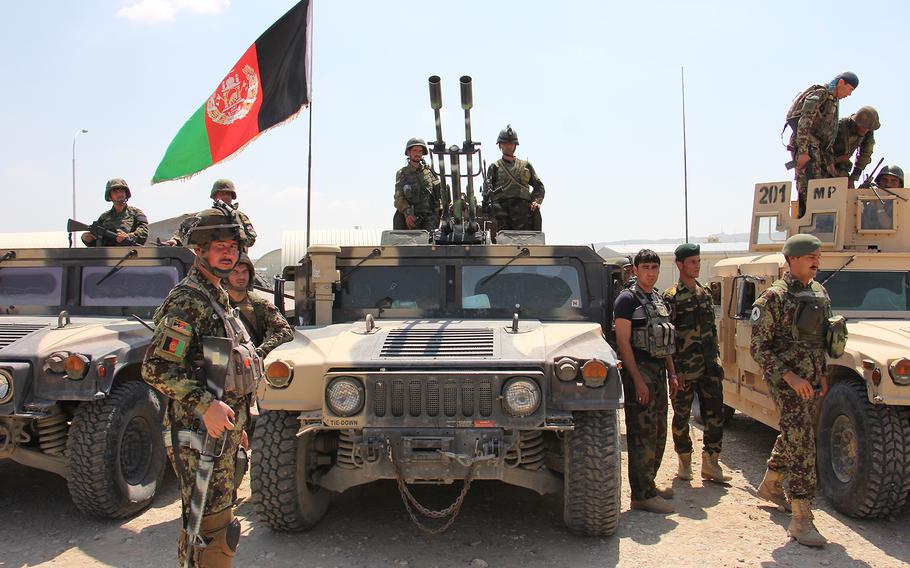 Afghan National Army soldiers prepare to move out following an inspection of troops at the Regional Military Training Center at Tactical Base Gamberi, Afghanistan, on July 30, 2015. (Jarrod Morris/U.S. Army)

KABUL, Afghanistan — Responding to increasing attacks, Afghan special forces so far this year have conducted more than 3,000 operations against the Taliban and terrorist organizations such as the Islamic State group, government officials said. But they say it will take much more effort to defeat the militants.

“We have carried out these operations according to the capacity of our forces,” Gen. Mohammad Radmanish, deputy spokesman for the Afghan Defense Ministry, said Saturday. “It’s a lot for us, but not enough to fully eliminate the enemy.”

Radmanish described the 3,000 operations, conducted by special forces in the army and police, as “attack missions that targeted the enemy.” He could not provide comparable figures for such operations in previous years but said this year’s number was very high.

The Taliban are threatening six of Afghanistan’s 34 provincial capitals and are said to control more territory now than at any time since 2001, when a U.S.-led invasion ousted them from power. In addition, a local branch of the Islamic State group continues to operate in the country’s east, despite a yearlong offensive against them that has included U.S. airstrikes.

U.S. and NATO forces have supported about 20 percent of the Afghan special forces operations this year, coalition officials said. The U.S. alone has given air support, while the larger NATO mission has provided services such as transportation and intelligence.

Most of the Afghan special forces mission are independent, meaning there is no NATO support with planning and NATO forces do not accompany their Afghan allies in combat.

While the Afghans, with international backup, have managed to prevent a major city from falling to the Taliban this year, Radmanish said the unprecedented number of guerrilla attacks on several fronts is posing a challenge.

“Militants are still carrying out their attacks across the country that are mostly harming civilians,” he said. “Because of this we are committed to increasing our special operations in the future.”

Nearly 8,400 civilian casualties were recorded in Afghanistan in the first nine months of the year, most of them caused by anti-government groups, the U.N. mission in Afghanistan said in a report released this month.

The need for a greater number of special forces operations will raise further questions over the numbers of trained soldiers in the Afghan military and their ability to fight on their own.

Afghan special forces, who number about 17,000 troops, are trained to target Taliban commanders and bomb-making facilities. They are often used as regular infantry because of shortages of skilled troops in the Afghan army.

“We are concerned about … the overuse of these special operations forces,” Brig. Gen. Charles Cleveland, spokesman for U.S. Forces-Afghanistan, said earlier this month.

“One of the big things that we’re focused on is how can we help the Afghans regenerate capability and capacity,” he said. “We really want to take from this special operations element the best practices and the best lessons learned and help export them into the conventional forces.”