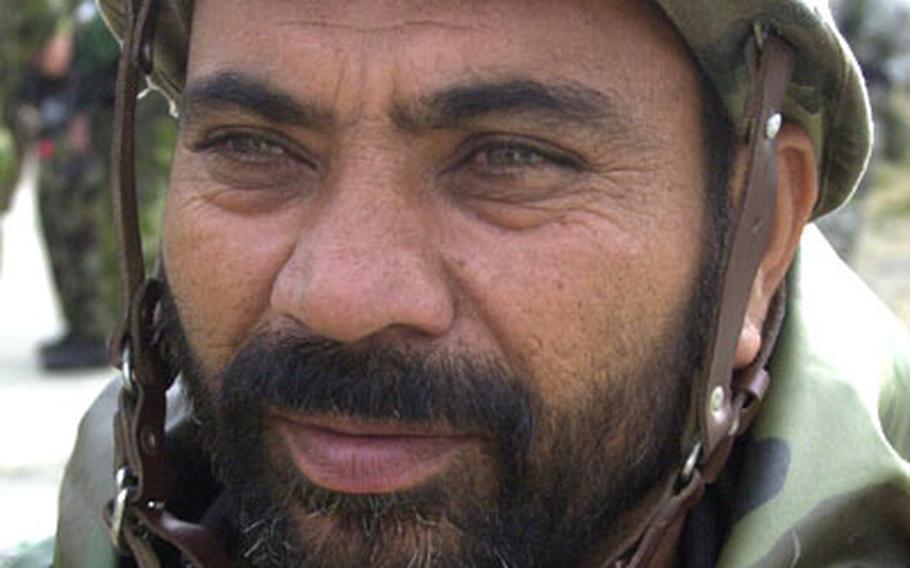 First Lt. Zakria Surkhrody of the Afghan National Army is one of 37 Afghan soldiers training at Hohenfels this month. (Seth Robson / S&S)

First Lt. Zakria Surkhrody of the Afghan National Army is one of 37 Afghan soldiers training at Hohenfels this month. (Seth Robson / S&S) 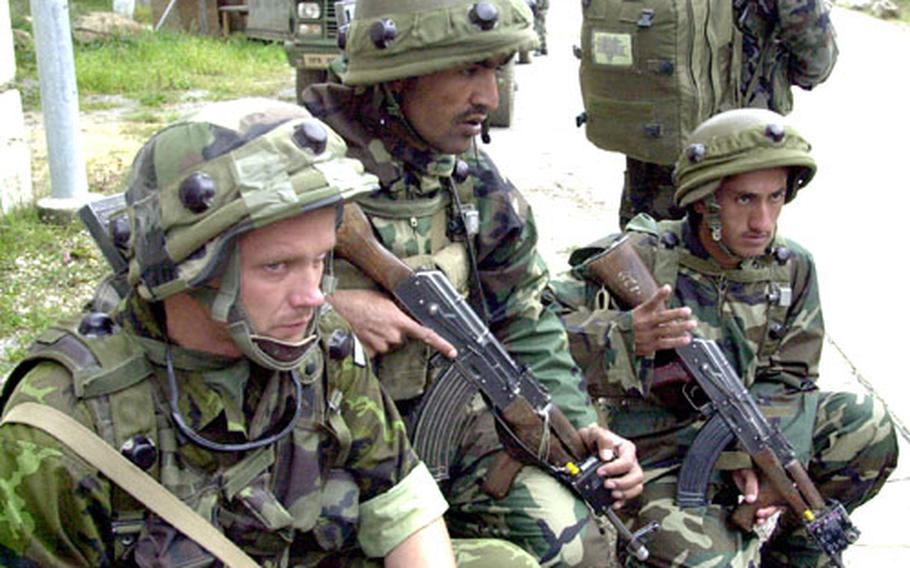 A Czech and two Afghan soldiers prepare to raid a suspected bomb maker’s house while training at Hohenfels, Germany, on Tuesday. Afghan National Army troops are training in Europe for the first time. (Seth Robson / S&S) 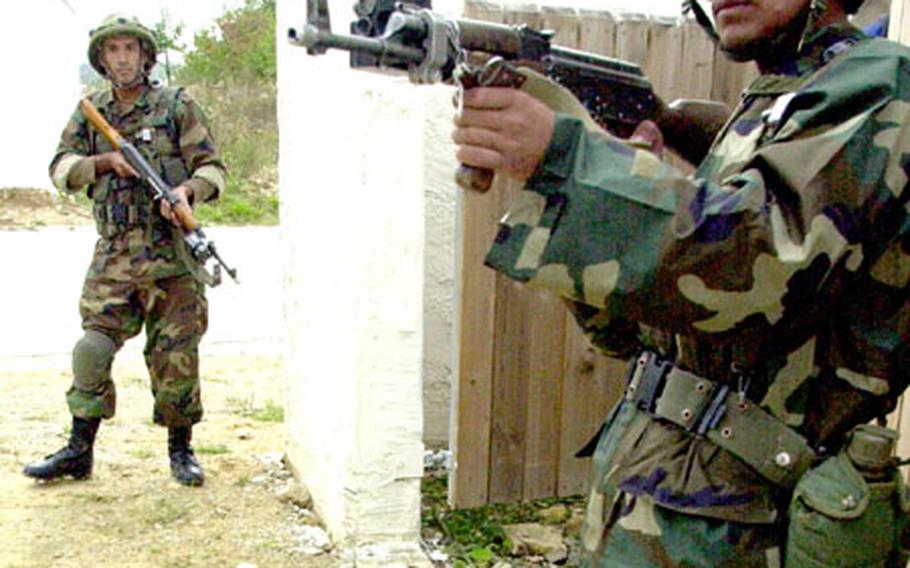 HOHENFELS, Germany &#8212; Afghan National Army troops are training in Europe for the first time as part of a plan to strengthen indigenous forces so they can help NATO take the fight to Taliban and al-Qaida insurgents in their homeland.

Thirty-seven Afghan soldiers, from 1st Brigade, 201st Corps, are training with 125 NATO troops from Germany, Croatia, the Netherlands, Italy, Norway, Sweden, France, Slovenia and the Czech Republic, according to Lt. Col. Jens-Peter Rasmussen, a Danish soldier who liaises between U.S. forces and NATO.

Maj. Eric Timmerman, an observer-controller team leader with Hohenfels Joint Multinational Readiness Center, said it is the first time Afghan troops have trained outside their homeland since it was liberated from the Taliban in 2001.

Maj. John Daniels of the Combined Security Transition Command, one of a few U.S. personnel serving in Afghanistan who came to Hohenfels with the ANA, said the Afghans are learning NATO techniques, tactics and procedures.

The NATO soldiers &#8212; who soon will head to Afghanistan as Operational Mentorship Liaison Teams &#8212; are getting experience working with Afghans before they head downrange, he said.

On Tuesday, Afghan and NATO troops conducted operations in one of Hohenfels&#8217; Military Operations in Urban Terrain, or MOUT, sites &#8212; an artificial town populated by role players acting as Afghan civilians and Taliban insurgents.

Each of the Afghan soldiers carried a different type of AK-47 rifle. Some weapons had ancient wooden stocks, others had front hand grips and others had folding metal stocks.

Daniels said the weapons come from different countries such as the Czech Republic, Russia and Romania, but they all take the same ammunition.

Soon the NATO forces received intelligence from the role players that a bomb maker was hiding in a nearby house. Moments later the Afghan troops were attempting to coax the terrorist out of his lair when a suicide bomber struck and more terrorists attacked with small arms. But the Afghan and NATO forces responded quickly, laying down deadly fire to neutralize the enemy.

One of the European soldiers training alongside the Afghans, Maj. Andre Widnes, 36, of the Norwegian army, said he was impressed by the training facilities at Hohenfels.

Widnes is headed back to Afghanistan after a six-month tour to Kabul last year with the Norwegian Battle Group. He said he&#8217;d worked with the Afghans in Kabul and found them to be good workers.

The 25-year Afghan veteran said he worked for the Taliban government when it was in power but disapproved of it.

Surkhrody said the Afghan soldiers training at Hohenfels are used to daily fighting against the Taliban in eastern Afghanistan near his home town of Jalalabad.

On Saturday, the Afghans watched the Hohenfels High School football team play. And after work each night they play volleyball, Surkhrody said.

&#8220;Volleyball is very popular in Afghanistan. Everybody plays volleyball. After 5 p.m. we soldiers play volleyball with all the other countries. Our group beat them all,&#8221; he said proudly.