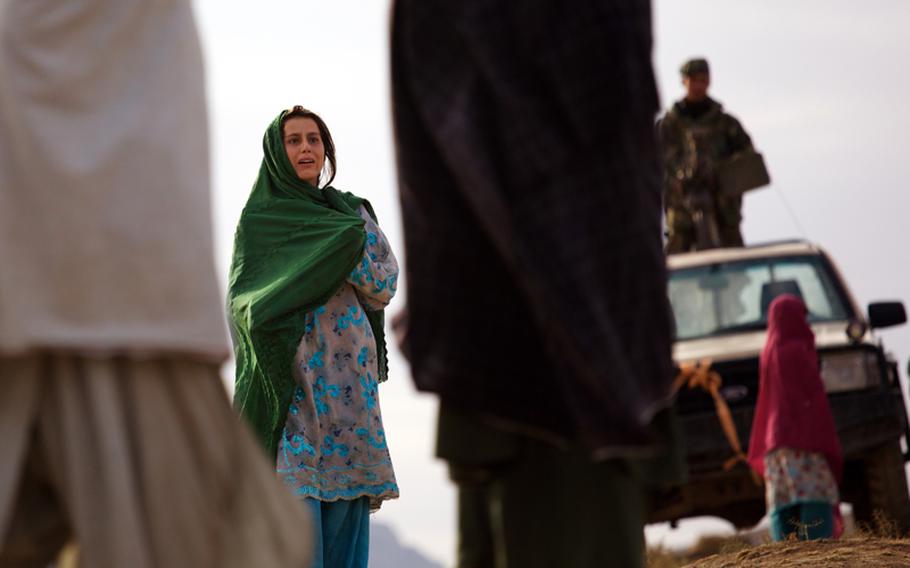 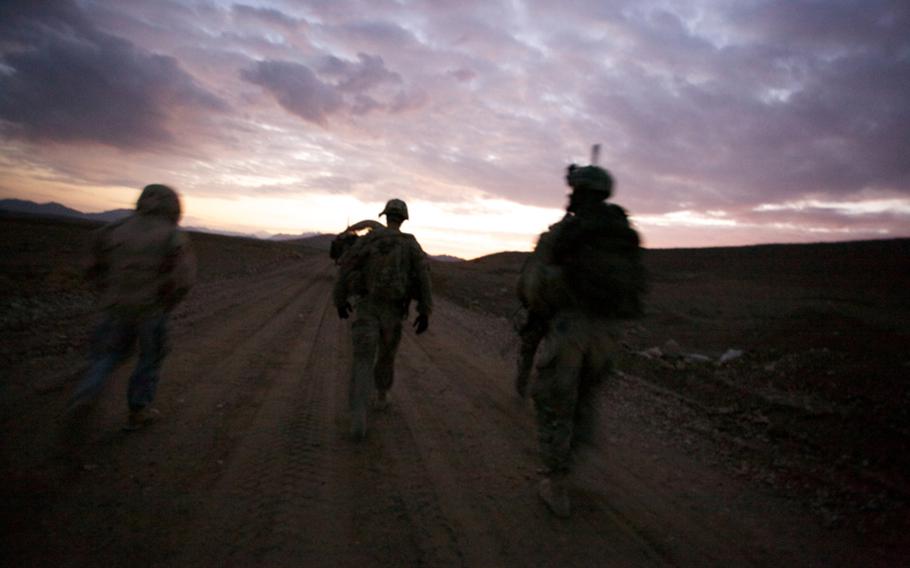 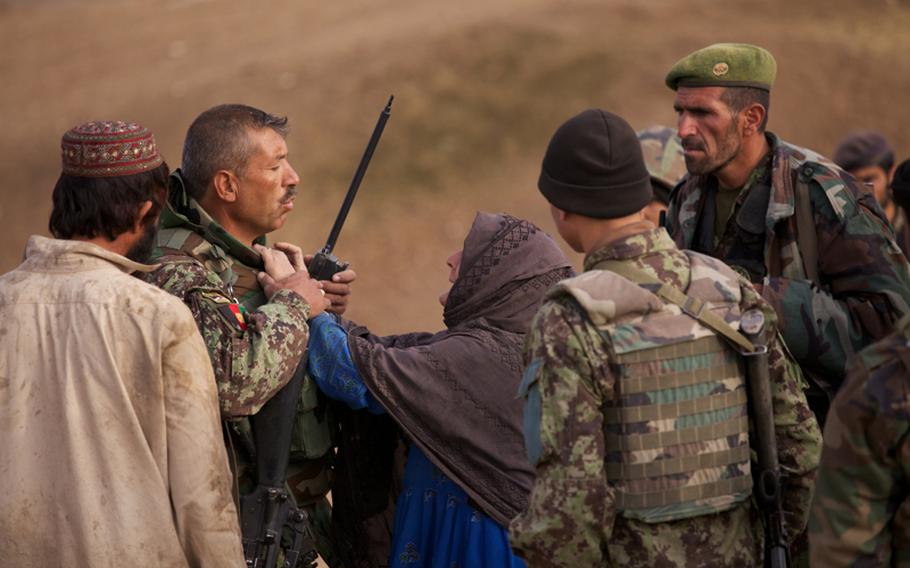 An old woman, the mother of one of three men detained by Afghan forces in Zardad, pleads with an Afghan captain for her son&#39;s release. (Matt Millham/Stars and Stripes) 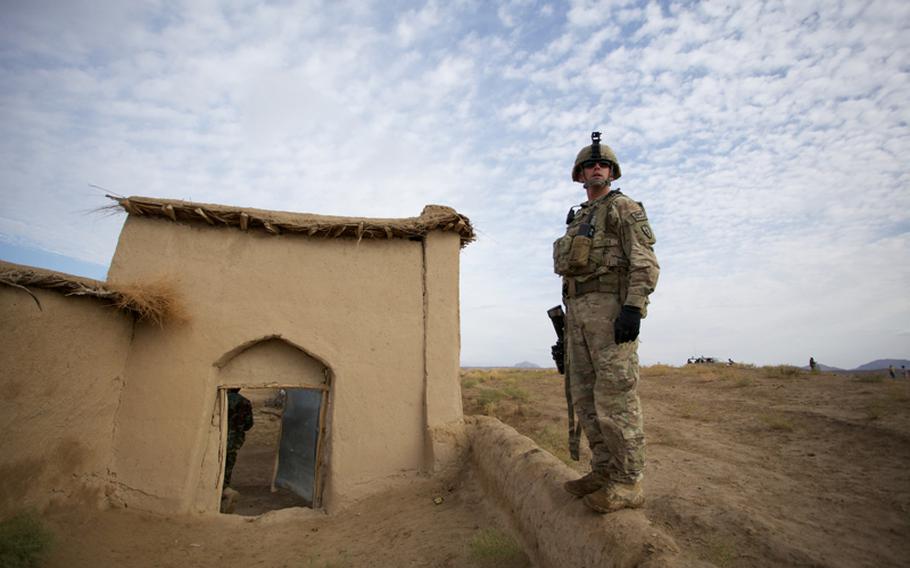 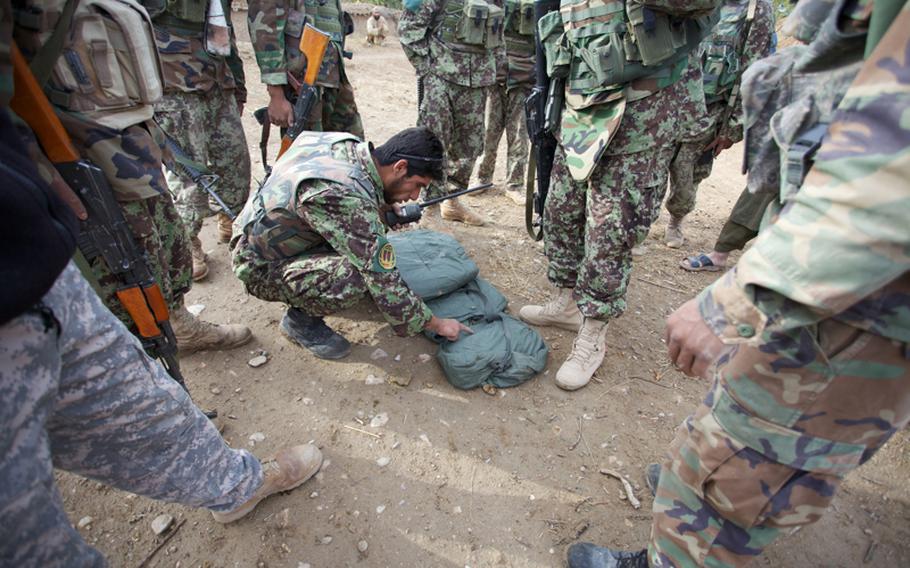 An Afghan soldier points out the word "jihadi" scribbled on a sleeping bag found during a search. (Matt Millham/Stars and Stripes) 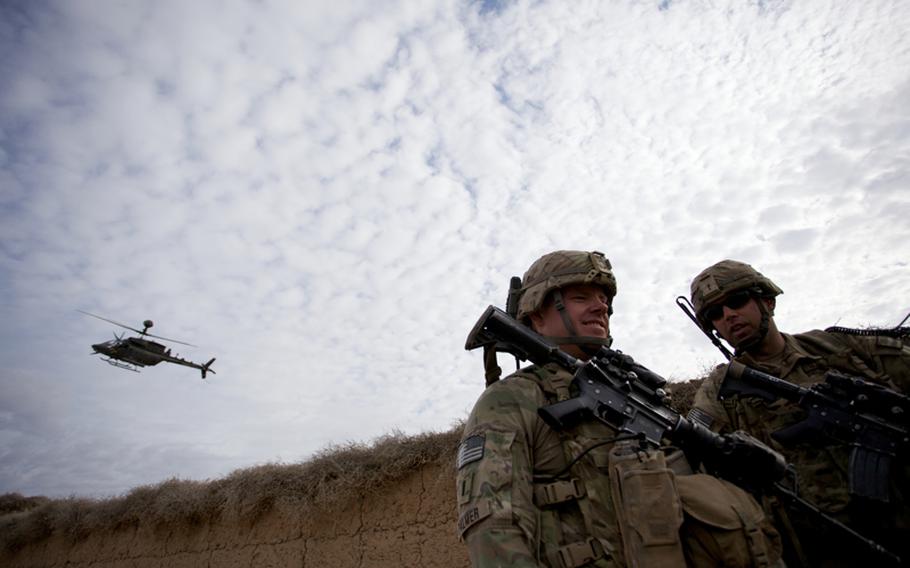 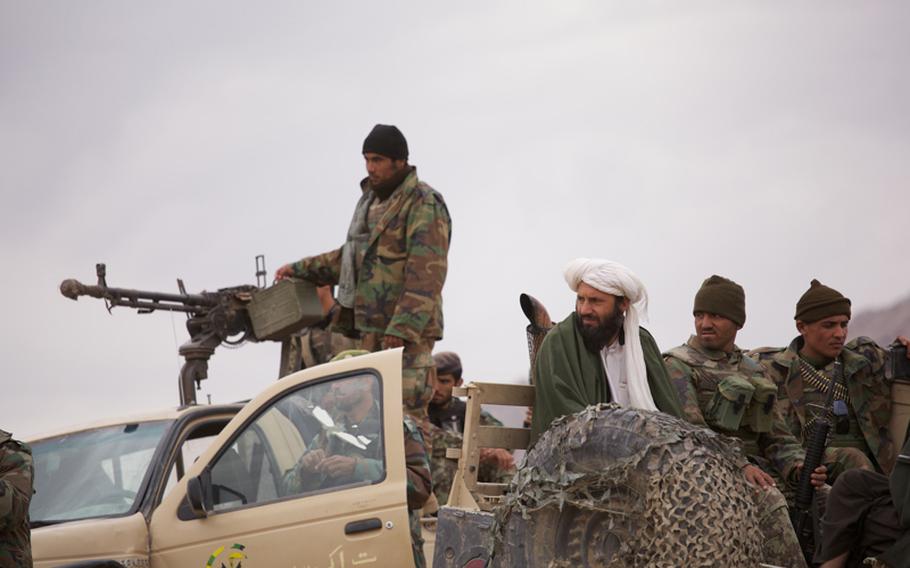 An Afghan elder sits on a rear bench of an open-backed Humvee for a trip to Checkpoint 2, where he will sign a document assuring Afghan army officers that men they&#39;d detained were not bad guys in exchange for their release. (Matt Millham/Stars and Stripes) 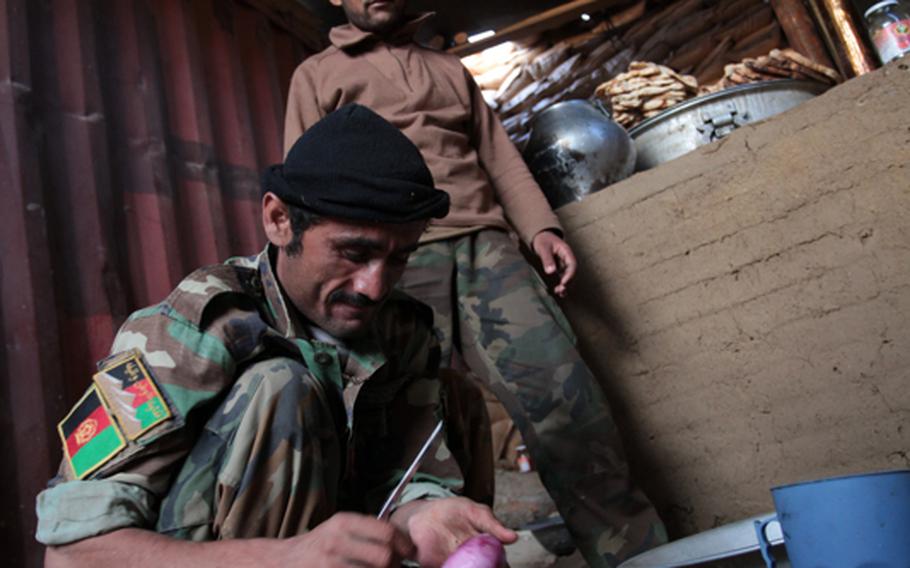 Afghan soldiers at Checkpoint 2 on Route Chicken prepare dinner the night before a search ann key-leader engagement in the nearby village of Zardad. (Matt Millham/Stars and Stripes) 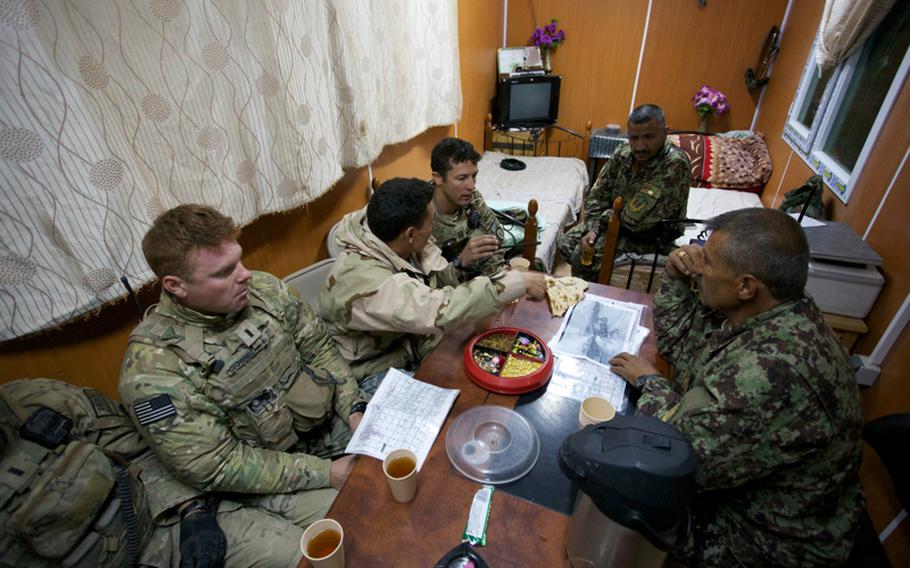 The commander and platoon leaders of Company C, 1st Battalion, 24th Infantry Regiment, meet with Afghan army officers to go over the plan for the next day&#39;s operation in Zardad, a village near an Afghan checkpoint. (Matt Millham/Stars and Stripes) 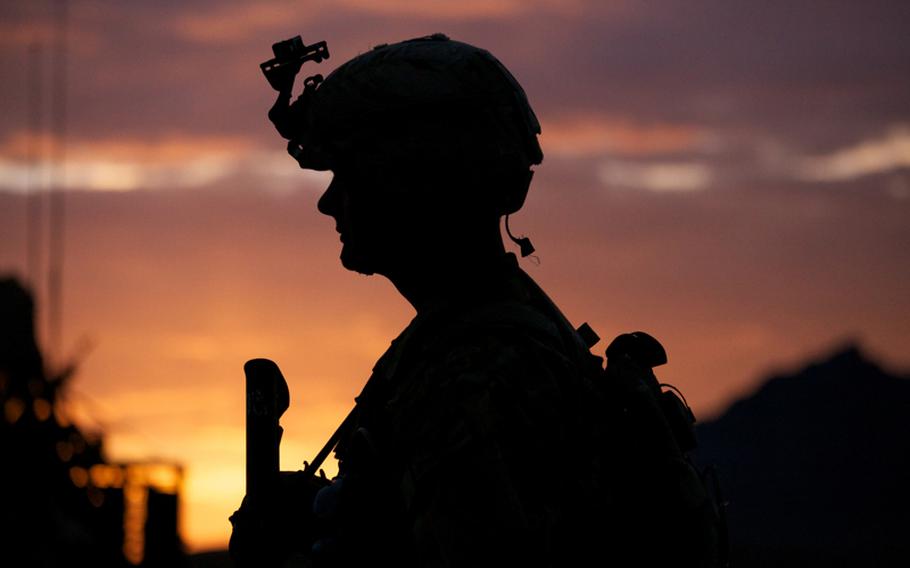 A soldier silhouetted against the sunrise awaits the arrival of Afghan forces, who are to lead a search of Zardad and talk with local leaders to encourage their support in finding Taliban. (Matt Millham/Stars and Stripes) 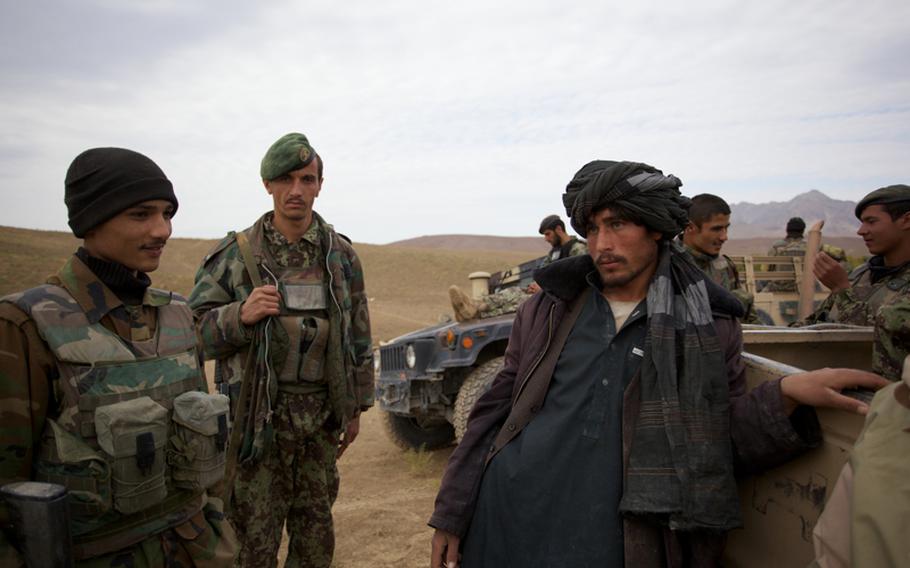 Mohammad Hakim, one of two brothers detained in Zardad by Afghan soldiers, stands nonchalantly as his picture is taken by a U.S. soldier. (Matt Millham/Stars and Stripes) 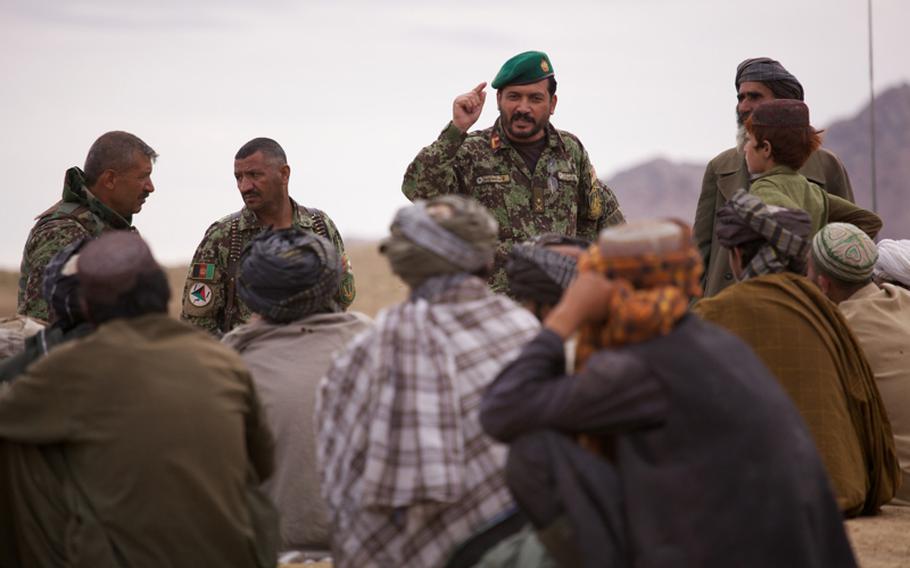 Maj. Jamal Nasser, a religious officer in the Afghan army, talks with elders in Zardad, trying to coax their cooperation in finding insurgents, who are known to visit the village frequently. (Matt Millham/Stars and Stripes) 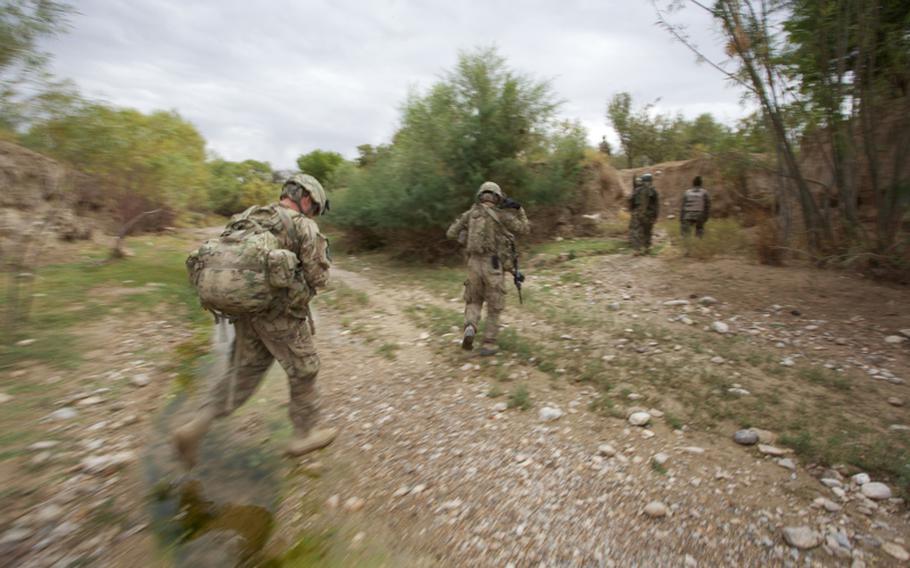 Soldier cross a wadi, or stream bed, after a search of pomegranate orchards and fields adjacent to Zardad. They found no weapons or other suspicious items. (Matt Millham/Stars and Stripes) 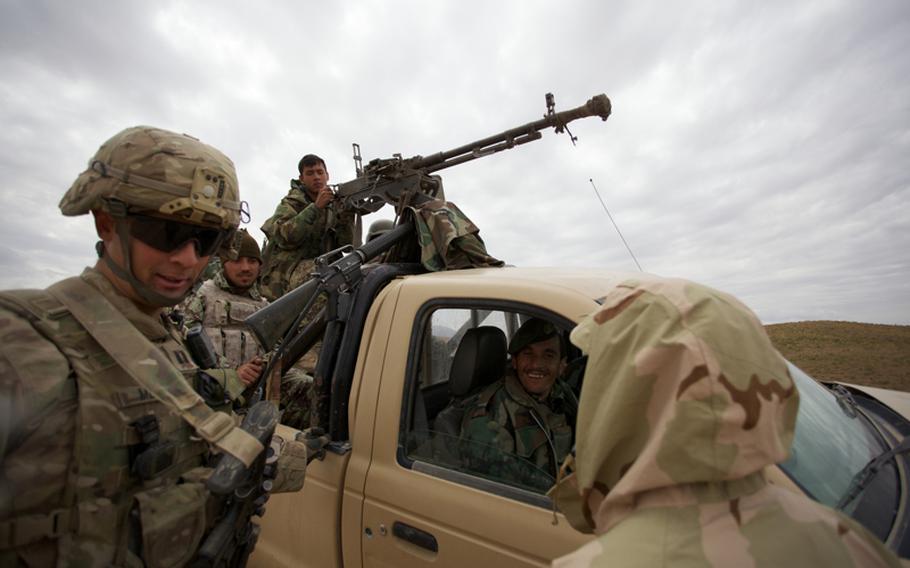 ZARDAD, Afghanistan &mdash; An old woman waded through a mass of Afghan soldiers toward their captain, her dirt-smudged face frozen with woe. She dug her henna-stained fingers into his flak jacket&rsquo;s collar and wailed: Let my son go.

It was at the start of a search in Zardad, a village of mud and straw buildings flanked by a patchwork of pomegranate orchards and empty autumn fields. The captain had taken her son and two other men into custody.

Their names were on his list, whatever that meant. Where he got it, the U.S. soldiers of Company C didn&rsquo;t know.

They&rsquo;d wait until later when they too would question the men. It was an Afghan operation, and the Americans were there to support, not take charge. Still, it was starting strangely.

Three weeks earlier, a platoon of Afghan soldiers had moved into a new checkpoint about 400 yards away. One reason for coming to Zardad, some 15 miles west of Zabul&rsquo;s provincial capital, Qalat, was to meet the locals.

It was an awkward way to say hello.

It wasn&rsquo;t the arrests, but the wailing that caught the attention of Capt. Jeremy Medaris, commander of Company C, 1st Battalion, 24th Infantry Regiment, who had been on scores of patrols and seen plenty of men detained. But he&rsquo;d never seen a scene like this.

&ldquo;So very unusual,&rdquo; he remarked as more than a dozen women and children joined the old woman in a chorus of weeping and massed around the Humvee where the detained men sat blindfolded. &ldquo;I don&rsquo;t think I&rsquo;ve ever seen that, actually, where they take somebody, and they all start screaming and chasing after them.&rdquo;

The lamentations continued for the better part of the morning as the Afghan soldiers cleared compounds, sending any men they found to a dirt slope to hear an Afghan religious officer appeal for their cooperation.

As the operation dragged into late morning, the gathered men waited with remarkable patience, making no obvious pleas to return to their homes or work.

Late to the party

Medaris&rsquo; troops had surrounded Zardad just before daybreak to keep villagers from leaving, and they expected the Afghan soldiers to start the search soon after. That had been the Afghan captain&rsquo;s plan. When he arrived, half an hour late to his own operation and with just half his force, he told Medaris, a native of Florence, Ala., that he wanted to wait for the rest of his men before starting.

The captain thought for a moment, then changed his mind. &ldquo;Let&rsquo;s go.&rdquo;

It was another hour before the rest of his force arrived.

The Afghan soldiers found a handful of mortar casings, an inert illumination round, a cassette-sized speaker that could be plugged into a music player, and a sleeping bag on which somebody had scrawled &ldquo;jihadi&rdquo; in Pashto. Why they confiscated the speaker made no apparent sense. The Americans didn&rsquo;t question it, but I was curious.

As his comrades ogled the sleeping bag, the soldier who&rsquo;d found the speaker stepped back from the crowd. When he thought nobody was looking, he slipped it into his pocket. Nobody else noticed.

&ldquo;Try to make sure they don&rsquo;t contaminate the evidence,&rdquo; Pfc. Michael McGrew, a radio operator from Cleveland, told his buddies as a Kiowa helicopter buzzed low overhead.

Chances are it wouldn&rsquo;t have made much difference. None of the items found were lethal, just the detritus of three decades of war, which litters Afghanistan. And any fingerprints they had probably belonged to the detainees or their relatives in whose homes they were found.

The Americans fingerprinted and photographed the detained men and questioned them separately, looking for inconsistencies and a reason to hold them or let them go.

Two were brothers, who gave conflicting stories about the Taliban&rsquo;s visits.

The Afghan captain had his doubts about the older brother, but shoving his suspicions aside, he struck a deal.

In exchange for the detainees&rsquo; release, the elders would go back to base with him and sign a statement assuring him the men weren&rsquo;t bad guys.

Not that you can trust a criminal to admit what he is, but the agreement seemed to have another purpose: It was a face-saving way for the captain to repent. If the people had information about the Taliban, they&rsquo;d be unlikely to share it with the men who took their sons. If his job is finding the real insurgents, he needs their help.