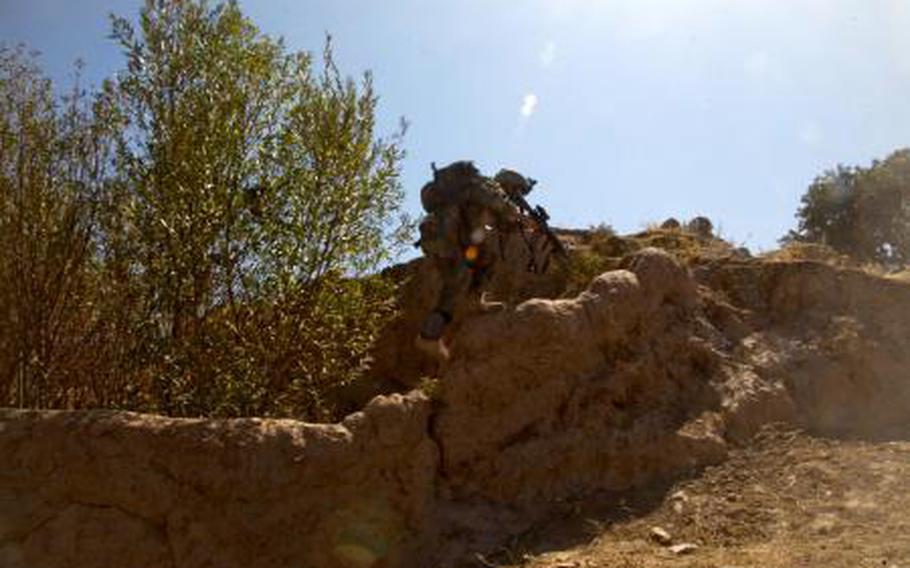 MAZAR-E-SHARIF, Afghanistan — Afghan security forces have launched a large-scale counterinsurgency campaign in the northern province of Faryab, as well as other areas in the north and south where insurgents have been aggressively challenging government forces, Afghan and U.S. officials said Thursday.

In Faryab’s Almar district, where a suicide attack Wednesday killed at least 19 people and wounded dozens more, Afghan special operations forces units have been working with the army to prepare for the offensive, said Col. Paul Sarat, commander of the NATO-led coalition’s train, advise and assist mission’s northern command in Mazar-e-Sharif. In recent days, security forces have seized control of key areas of the district from the Taliban, according to local news reports.

The Afghan army’s main push is focusing on the rural areas in the western part of Faryab where the Taliban’s presence is the strongest, a U.S. military intelligence official said.

“Faryab has always been a problem area,” Sarat said in an interview Monday. “The government really has not had any control out there for several years,” he said.

Other offensives were launched this week in the eastern provinces of Khost and Paktia and the southern province of Helmand, Defense Ministry deputy spokesman Dawlat Waziri said.

U.S. Marines and British forces suffered some of the heaviest casualties of the war in their campaigns to clear Helmand province, a traditional Taliban stronghold. Since foreign troops mostly withdrew last year with the official end of the combat mission in Afghanistan, the insurgents have repeatedly challenged government troops there in an apparent attempt to reestablish their control. In most cases, Afghan forces have been able to push the insurgents back after a few days.

Since the start of the fighting season in spring, the Taliban also have been very active in the north, particularly in the strategically important Kunduz province. The insurgents managed to temporarily occupy several district centers near the provincial capital before being driven out by government reinforcements.

Complicating the situation in the north is an influx of insurgents from other parts of the country and across Afghanistan’s porous borders from Pakistan and Uzbekistan.

Clashes between rival insurgent groups in the north are almost as common as those between the Taliban and government forces, Col. Stephen Basener, head of intelligence for the coalition’s northern command said.

The result has “been kind of a ping-pong,” with neither government forces nor insurgent fighters able to hold any sizable amount of territory, despite the unprecedented levels of violence in the north, Sarat said.

“I still think it’s pretty much a stalemate” between government forces and the insurgents, Sarat said. Faryab and the surrounding areas “are nowhere near being overrun” by either the Taliban or any other terrorist organization in the region, he said.

About 175 Afghan special forces troops, backed by a contingent of U.S. special operations forces based in Kunduz province in the northeast, spearheaded the preparations for Thursday’s offensive in Faryab in the northwest, an official from the Afghan 5th Special Operations Forces group said.

Faryab police spokesman Sayeb Masoud declined to provide details on the missions leading up to Thursday’s operation. But Afghan special operations units, with the assistance of American and coalition special forces, “have achieved a lot in Almar district and are delivering a big blow to the enemy there,” Waziri said.

The special forces missions, which have been going on for several weeks, were designed to give security forces “a little bit of space” in preparation for the larger operation, Sarat said.

Instability in the north is not limited to Faryab and Kunduz. Gunmen attacked Vice President Abdul Rashid Dostum’s convoy in neighboring Jowzjan province on Tuesday, leaving one attacker dead, local news reports said. Dostum, a former Uzbekistan warlord who maintains a devoted following in the region, was visiting the region to monitor the growing violence in the north.

“The insurgents have always seen Faryab as the gateway to the north,” Basener said.

Commanders from the 209th Shaheen Corps, which together with the 5th Special Operations Forces group is leading the offensive in Faryab, and coalition advisers have begun planning for a follow-on counterinsurgency operation in Kunduz, the traditional base of operations for the northern insurgency, Basener said. But that operation will likely begin in September, once the mission in Faryab is complete.