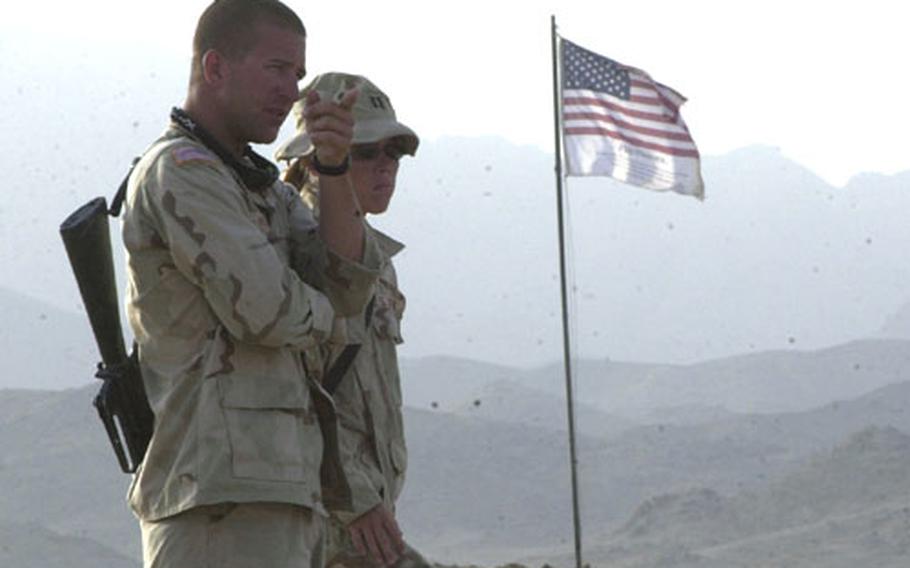 A contingent of combat engineers from the New York National Guard have staked an American flag with the names of each victim killed in the 9-11 attacks written on it at a new road-building outpost deep inside the Taliban heartland in Afghanistan. (Jon R. Anderson / S&S)

A contingent of combat engineers from the New York National Guard have staked an American flag with the names of each victim killed in the 9-11 attacks written on it at a new road-building outpost deep inside the Taliban heartland in Afghanistan. (Jon R. Anderson / S&S) 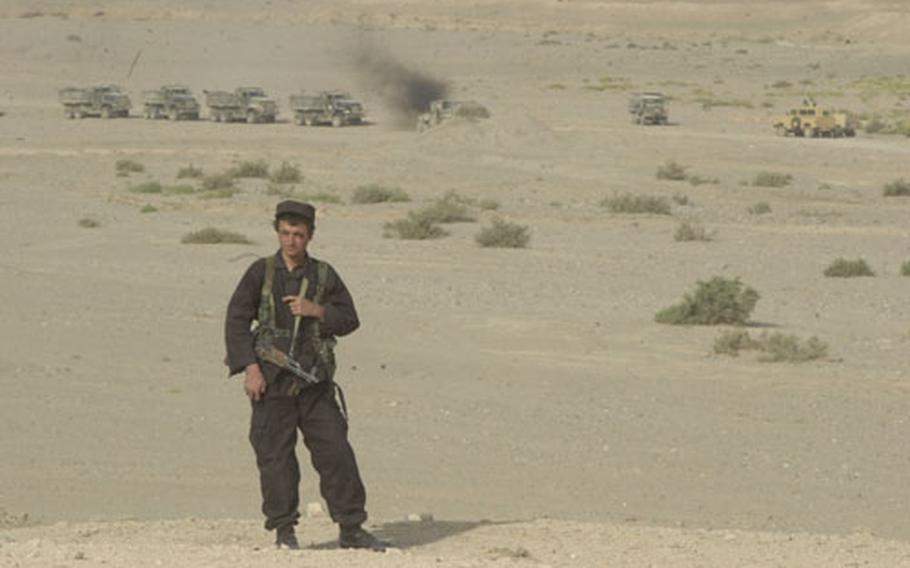 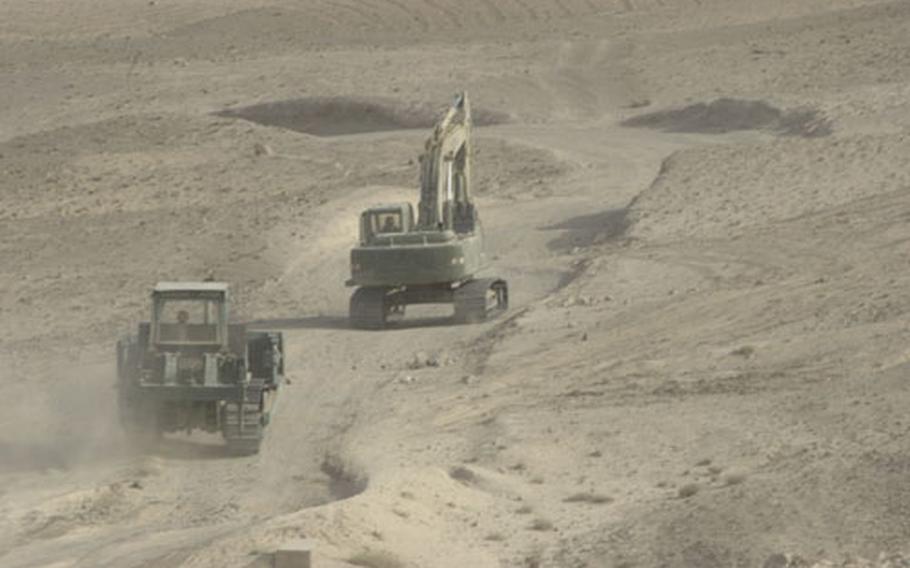 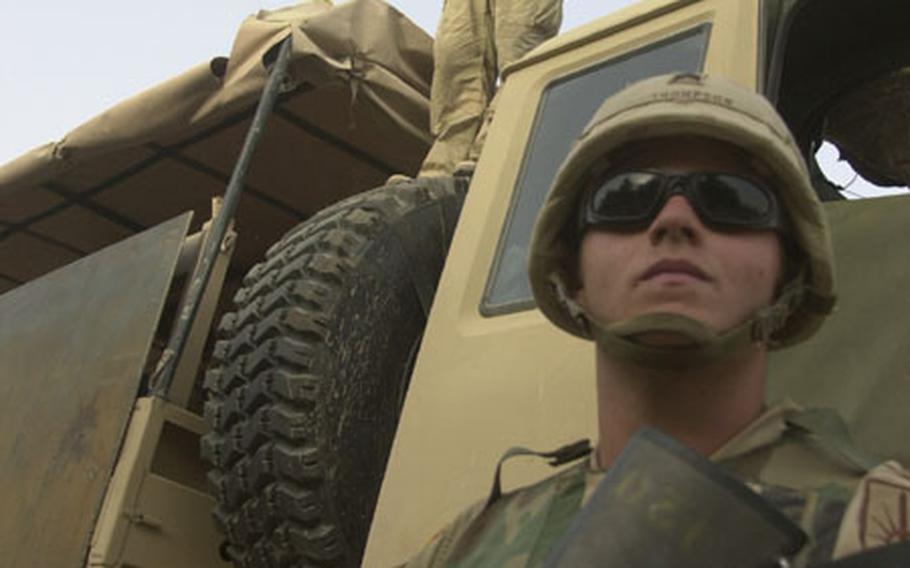 FORWARD OPERATING BASE TIGER, Afghanistan &#8212; The road from Kandahar to Tarin Kowt snakes its way through Afghanistan&#8217;s southern badlands like a desert viper &#8212; long, dusty and dangerous.

A small contingent of soldiers, however, has come to tame the snake.

Culled mostly from the Louisiana and New York National Guard, a combat engineer task force has staked out a new bare-bones outpost about an hour north of Kandahar. Afghan crews already have started building the two-lane highway that will mark the first leg out of Kandahar. The Guardsmen will take it the rest of the way.

At places little more than a goat trail, the tire-shredding, bone-jarring 75-mile stretch of road is currently a full day&#8217;s marathon in only the most hardy four-wheel drive vehicle.

Ranging over narrow, mile-high mountain passes, through ancient medieval villages and across rocky desert moonscapes covered in inches of thick dust, the road runs through territory that is treacherous in more ways than one.

When the United States invaded Afghanistan three years ago and put Kandahar under siege, most of the Taliban&#8217;s top leaders fled to Tarin Kowt.

The remote capital of the Uruzgan province, Tarin Kowt is the birthplace of Mullah Omar, the regime&#8217;s founding leader. The village and its surrounding mountains are also among the places U.S. intelligence suspect Osama bin Laden may be hiding.

&#8220;We&#8217;re going through some pretty rough country,&#8221; said project manager Capt. Chuck Hudson, from his new command post scratched out of the desert floor earlier this month and dubbed Forward Operating Base Tiger.

With the bulk of the task force coming from the Louisiana National Guard&#8217;s 528th Combat Engineer Battalion, FOB Tiger is named in honor of the Louisiana State University mascot.

The Spartan camp offers few comforts: no phones, e-mail or air conditioning, and showers only run when the 100-gallon water tank has been filled.

That&#8217;s why combat engineers got this job, Hudson said.

Where civilian aid groups have been putting in most of Afghanistan&#8217;s new roads, this is an area few dare tread.

Officials hope the road will bring new stability to the region.

Just as those roads allowed quicker supply and reinforcement of legionnaire outposts, they also ushered in improved trade routes. Pedersen said this road should help Afghanistan&#8217;s central government extend its influence while offering new economic opportunities for those who live there.

Once completed by the end of next year, assuming the project proceeds as planned, the new highway will cut the drive between the two cities from 12 hours to less than three.

Black-clad local Afghan militia forces, a contingent of Humvee-mounted scouts and OH-58 Kiowa Warrior helicopters from the 25th ID&#8217;s 3rd Squadron, 4th Cavalry Regiment have been enlisted to help provide security. The troops say they are prepared for what could be a running gun battle as construction moves north.

&#8220;You&#8217;re always nervous, any way you look at it,&#8221; said Staff Sgt. Paul Vance, a heavy equipment operator. In addition to the lurking Taliban fighters who have been increasingly harassing convoys and patrols in the area, he worried the militia units providing security could just as easily have turned in black Taliban turbans for the black ball caps they now wear.

The real fight, said Harper, a Rockwell, Texas, construction manager in civilian life, will be one of logistics.

It can be hard to find during southern Afghanistan&#8217;s blistering summer months where temperatures routinely top 100 degrees.

For a project this size, crews need to spray 40,000 gallons of water a day to allow base materials to compact properly under heavy, earth-rattling rollers.

Planners had thought a reservoir from a nearby dam would provide an ample supply. But that was before the summer drought drained most of it.

While teams are exploring ways to tap what&#8217;s left without bogging tankers down in the mudflats, Afghan drillers have been contracted to try and bore into underground aquifers.

Meanwhile, the Guardsmen are battling on a second logistics front.

The 80 bulldozers, scrapers, graders, dump trucks and other heavy equipment critical for project &#8220;have been eaten up over here.&#8221;

&#8220;Tires are becoming a huge deal,&#8221; he added. No fewer than five tires blew out in a single day of construction last week.

&#8220;We&#8217;ll solve these problems,&#8221; brigade commander Pedersen told the engineers during a visit to the construction site last week.

The road will go through, he promised. The viper will be tamed.

Planting a message to the Taliban

To this day, the New York City native and volunteer firefighter carries pictures of three friends who died in the carnage.

&#8220;Never in a million years,&#8221; Lopez said, did he imagine he&#8217;d one day find himself helping build a road from the city where Osama bin Laden likely hatched his plans to the village where he may now be hiding.

Part of a new combat engineer task force, the 204th Combat Engineer New York National Guardsmen are helping put down a new two-lane road from Kandahar to Tarin Kowt, a super highway by Afghanistan standards through the heartland of the Taliban movement.

To make that plain, Lopez planted a U.S. flag atop a machine gun bunker at their austere construction camp with the names of the nearly 3,000 victims of Sept. 11 written into the red stripes of the American banner.

For Staff Sgt. Paul Vance, this is his fourth combat stint &#8212; the fifth if you count his tour at ground zero.

He just hopes this tour isn&#8217;t a repeat of his experience in Somalia where he built miles of new road so aid convoys could push out beyond the main cities. Until, that is, a firefight left scores of U.S. Rangers and Delta commandoes dead and wounded and the United States reversed course and pulled out of the country.