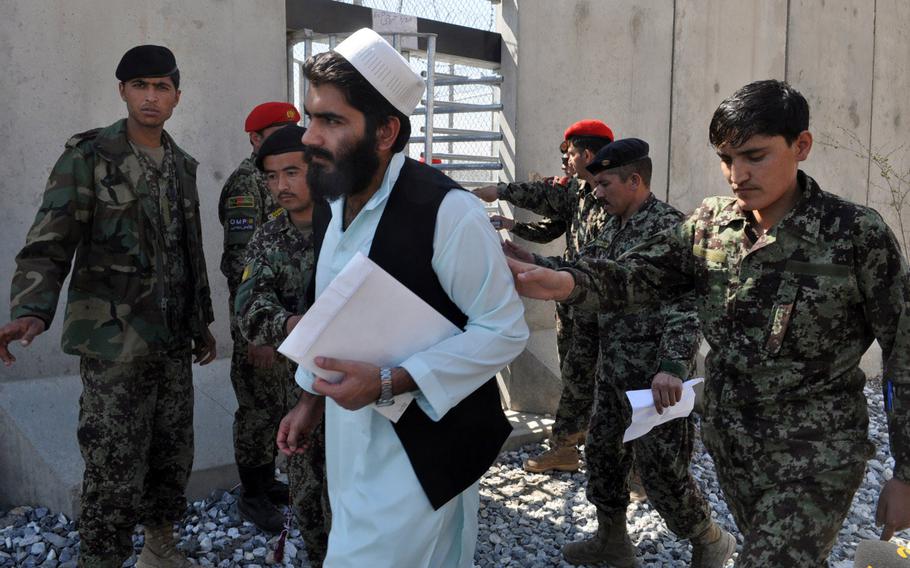 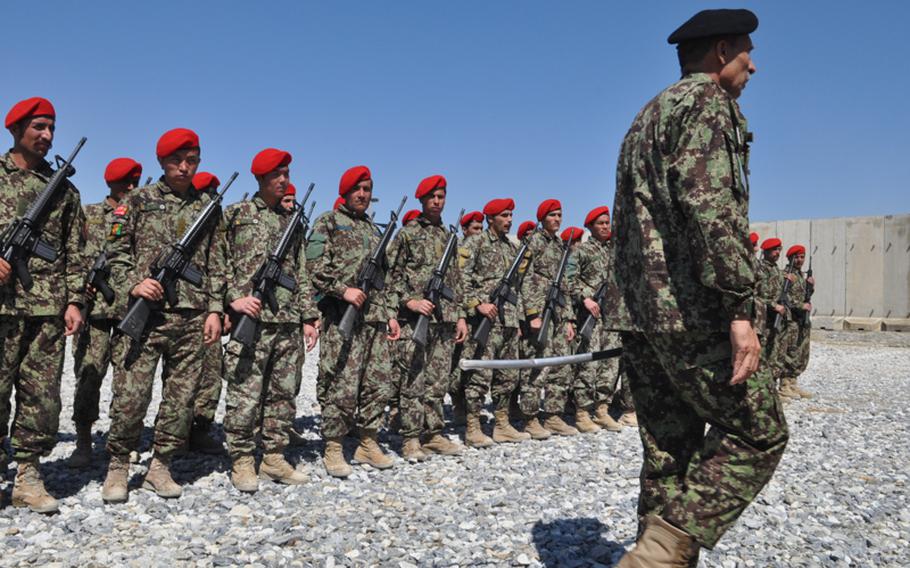 An honor guard practices before a ceremony marking the handover of Parwan Prison from U.S. to Afghan control in March 2013. (Heath Druzin/Stars and Stripes)

It is the latest chapter in a long-running dispute between Kabul and the NATO-led International Security Assistance Force over the fate of prisoners captured on the battlefield by international forces and held at a military prison at Bagram Air Field, north of Kabul. U.S. military officials have said those being released are responsible for the deaths of scores of international and Afghan troops, as well as civilians.

“It remains the position of (U.S. Forces-Afghanistan) that violent criminals who harm Afghans and threaten the peace and security of Afghanistan should face justice in the Afghan courts, where a fair and transparent trial would determine their guilt or innocence,” read a statement released by U.S. military command late Wednesday.

The Afghan government took custody of the prisoners nearly one year ago, when the U.S. military handed over Bagram’s Parwan Prison after a bitter dispute with Afghan President Hamid Karzai, who said foreign control of the prison violated Afghan sovereignty.

The U.S. has claimed the release violates an agreement the Afghan government made to gain control of the prison, wherein they guaranteed the prisoners would not be released without facing trial. Kabul has defended the move, saying there was not enough evidence to hold the prisoners.

“This decision, which appears to have been made based on political calculations and without regard for due process before the Afghan courts, is a major step backwards for the rule of law in Afghanistan, and poses serious security concerns,” Secretary-General Anders Fogh Rasmussen said in a statement.

“I am, frankly, appalled by the Karzai Government’s complete lack of respect for our troops, men and women who are fighting to keep Afghanistan standing,” McKeon said.

The issue has been simmering for weeks, and the number of prisoners to be released has been a moving target, with back and forth statements from U.S. government and military officials, as well as the Afghan government.

Abdul Shakoor Dadras, head of the Afghan Review Board, which was tasked with reviewing the prisoners’ cases, said there was no evidence to hold the prisoners and that their continued detention would have been illegal under Afghan law.

“These prisoners are released after deep reviews and investigations” he said in a telephone interview Thursday.

Ahead of the release, U.S. Forces-Afghanistan released a statement to the media detailing some of the alleged crimes committed by prisoners slated to be released as well as the evidence they claimed to have submitted to Afghan authorities. According to the release, among those being released are:

Mohammad Wali, apprehended in Helmand province in May 2013, is a suspected Taliban explosives expert who reportedly emplaced IEDs (improvised bombs) targeting ANSF and coalition forces. He was biometrically linked to two IED incidents, plus a latent fingerprint match to another IED in Helmand province. Wali’s personal property tested positive for multiple types of explosives in an explosive residue test after his capture.

Nek Mohammad, captured in Kandahar province in May 2013, is accused of facilitating rocket attacks against Afghan and coalition forces. He was apprehended with several 107mm artillery shells, mortar rounds and improvised explosive components, to include at least 25 pounds of homemade explosives.

Mohammadullah was apprehended in Paktiya province in May 2013. He is believed to be a Haqqani network IED specialist who builds and emplaces IED’s. Mohammadullah was biometrically linked to an IED and tested positive for four types of explosives in an explosive residue test. He was captured with his Haqqani commander, Ehsanullah (below).

Ehsanullah, captured in Paktiya province in May 2013, is a suspected Haqqani network commander who plans IED operations and attacks against ANSF and coalition forces. He was biometrically matched to a radio-controlled IED and tested positive for two types of explosives in an explosive residue test.

The prisoner release flap comes amid the larger disagreement between Karzai and his international allies over the signing of a security agreement that would pave the way for a small contingent of foreign troops to stay in Afghanistan after the Dec. 31 deadline for all international combat troops to leave the country. If signed, there would likely be a force of roughly 10,000 foreign troops left in the country for training, advising and counter-terrorism missions, but so far Karzai has said his successor must sign it.

Karzai is barred by the constitution from running for another term and will be replaced after Afghanistan’s presidential election in April, though it could be months before his successor is known if the election goes to a second round. Washington has said that waiting until after the election is settled may not leave enough time to plan deployments.

Zubair Babakarkhail and Stars and Stripes Patrick Dickson contributed to this report.