Afghan president pledges to secure peace through talks or war 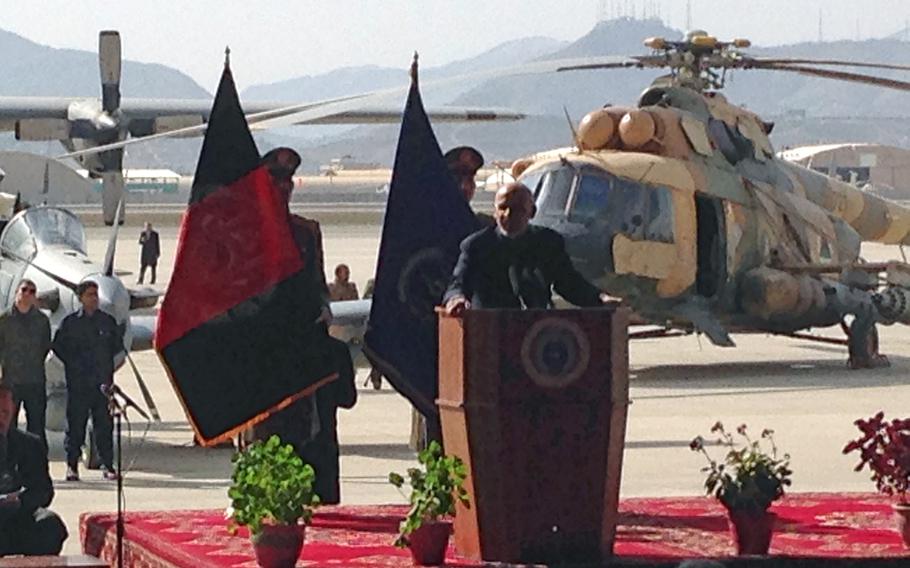 Buy Photo
Afghan President Ashraf Ghani says peace will come to Afghanistan - through peace talks with the Taliban or through a military victory in the 15-year war. He was speaking at an air force ceremony in Kabul on Thursday, Feb. 11, 2016. (Slobodan Lekic/Stars and Stripes)

Buy Photo
Afghan President Ashraf Ghani says peace will come to Afghanistan - through peace talks with the Taliban or through a military victory in the 15-year war. He was speaking at an air force ceremony in Kabul on Thursday, Feb. 11, 2016. (Slobodan Lekic/Stars and Stripes) 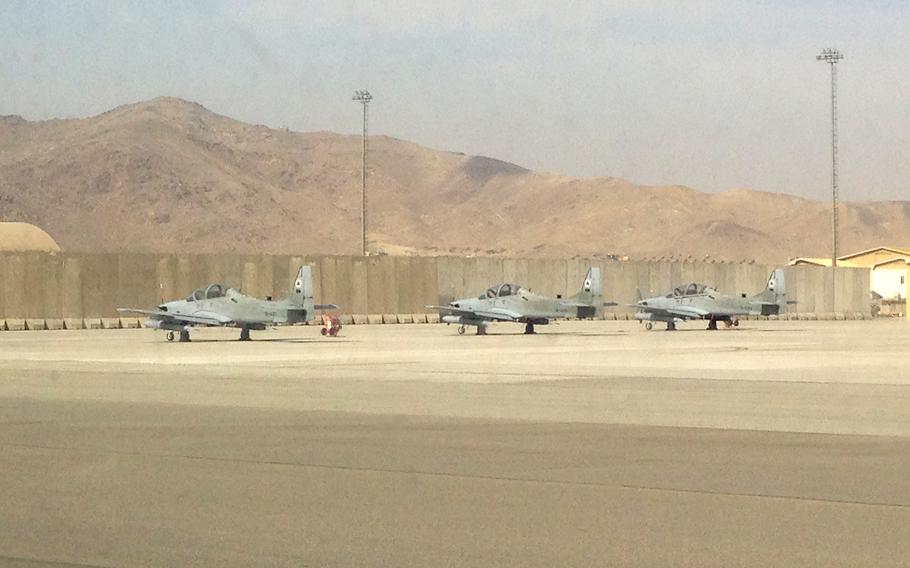 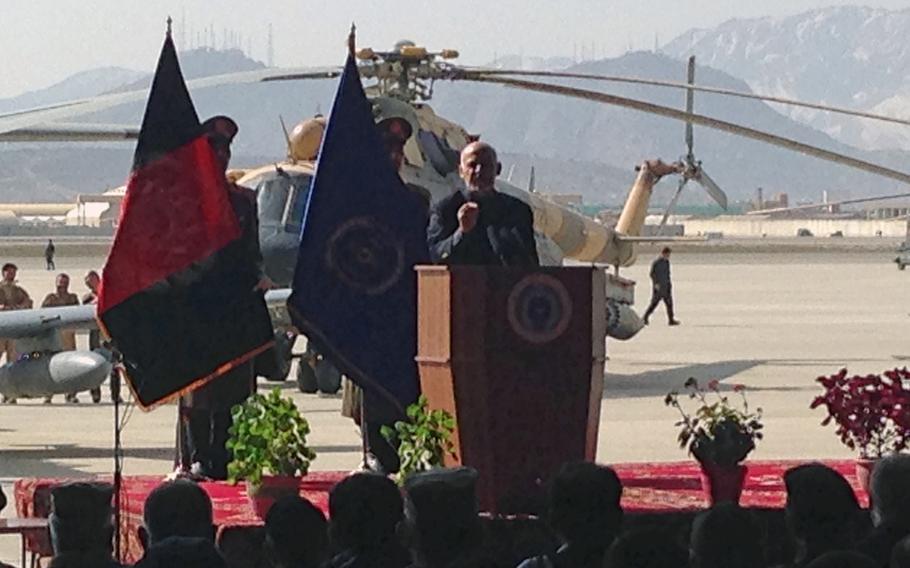 Buy Photo
Embraer/SNC Super Tucanos on the flight line at Kabul military airport on Thursday, Feb. 11, 2016. The newly delivered planes will significantly boost the capabilities of Afghanistan's nascent air force by providing it with its first aircraft that can drop various free-fall and precision-guided aerial bombs. (Slobodan Lekic/Stars and Stripes)

KABUL, Afghanistan — President Ashraf Ghani vowed Thursday that peace would come to Afghanistan, either through battlefield victory or peace talks.

Ghani was speaking ahead of a Feb. 23 meeting of the Quadrilateral Contact Group — comprising the United States, Afghanistan, Pakistan and China — which has been setting out a joint road map for a resumption of peace talks with the insurgents.

The Taliban, who have been invited to attend, have not responded yet, but they have not declined either. At an informal meeting in Doha last month, their representatives indicated that the movement may be ready to restart reconciliation talks with Kabul.

Ghani said either way, the government was prepared to deal with insurgents.

“Our generals understand the importance of the peace ... but no one can impose anything on Afghanistan with force,” Ghani said. “Our peace message is clear. We will win this peace both on the battlefield and on the political field.”

The first round of exploratory peace talks in Pakistan last summer was suspended after the announcement that the movement’s longtime leader, Mullah Omar, had died two years earlier, sparking a leadership struggle.

Since then the insurgents have mounted a nationwide offensive, which has stretched Afghan government forces to their limits. The Taliban control swathes of rural areas in the south, east and north, but so far they failed to conquer and hold any sizable urban centers. In late September, they took control of the northern city of Kunduz, but were finally ousted after two weeks of heavy fighting.

The government has been criticized for not anticipating the Taliban offensive, which appears to have surprised the Afghan military as well as commanders of the U.S.-led coalition forces. In the past, fighting ebbed in winter as the guerrillas retreated to their safe havens in Pakistan to rest and regroup.

At a ceremony at Kabul’s military airport on Thursday, Ghani praised the fledgling air force’s contribution to the war effort. The flying service wasre-established in 2008 after it had ceased to exist following the collapse of the Soviet-backed Afghan regime in 1992.

The ceremony featured the roll-out of four newly delivered Embraer/SNC Super Tucano A-29 counter-insurgency aircraft. The new aircraft will provide the flying service — which until now has operated only armed helicopters — with a massive boost in its ability to attack ground targets with a variety of free-fall and precision bombs.

Until now, the Afghan military has had to rely on coalition aircraft to bomb Taliban forces. The air force plans to begin combat operations with the first four A-29s next month. Four more are scheduled to be delivered in April, and the rest of the 20 on order by 2018.