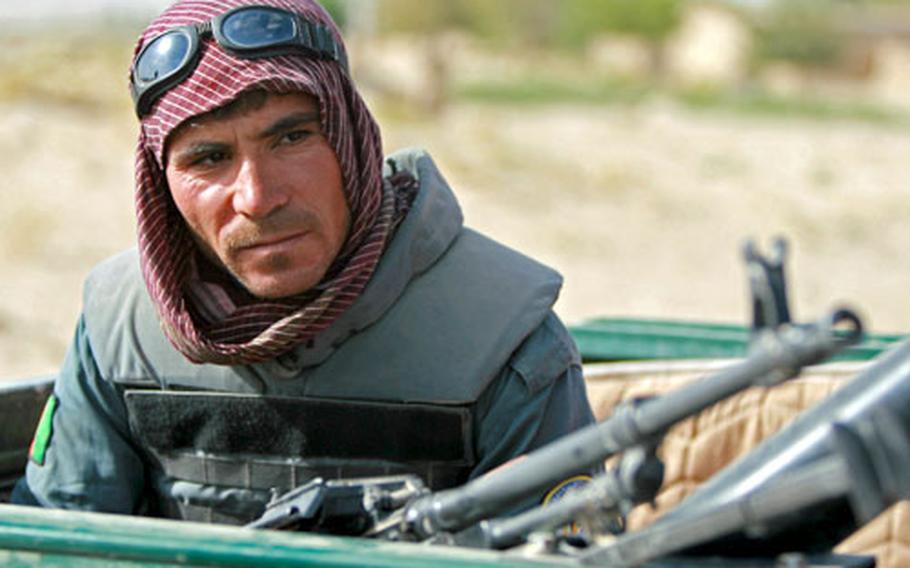 An Afghan police officer waits in the back of a pickup truck with a machine gun, before a recent meeting with tribal elders in the village of Osman Kheyl, in Kandahar province, Afghanistan. Unlike their U.S. counterparts, Afghan police serve mainly as paramilitary forces in the fight against Taliban insurgents in southern Afghanistan. (Drew Brown / S&S)

MAIWAND, Afghanistan &#8212; Groups of Afghan police officers lounge in the shade outside their compound, a few smoking hashish. Their chief wears toenail polish and a uniform with the rank drawn on in ink.

Maiwand, clearly, is no Mayberry.

But U.S. troops working with this battalion of Afghan National Civil Order Police say it&#8217;s proved itself a willing and relatively competent combat force &#8212; which is a good thing considering that the Afghan cops&#8217; primary mission isn&#8217;t exactly policing the community.

"We train them by taking them out and engaging the Taliban," said Maj. Kevin Reilly, a New York Army National Guardsman in charge of a U.S. police training team in Maiwand, a rural district two hours west of Kandahar.

But while U.S. troops say the civil-order police &#8212; a sort of upgraded strategic reserve force &#8212; are tactically capable, they remain hobbled by institutionalized corruption and dysfunctional logistics, and, U.S. officers say, depend on American support for everything from food and fuel to generators and vehicles.

And the civil-order police are intended to be only a temporary presence in the district. Forming a permanent local police force in a Pashtun province with deep ties to the Taliban has so far proved to be an elusive goal.

The district&#8217;s entire 200-member police contingent was fired in January amid a cloud of corruption. U.S. officers say the police had gotten involved in the area&#8217;s flourishing drug trade and had taken to burning competitor&#8217;s poppy fields.

The Afghan government sent in a replacement force of untrained militiamen from the north, but failed to pay them for three months. After finally receiving their back pay in late July, virtually all those officers quit &#8212; just days before they were slated to leave for an eight-week training course that U.S. officers see as critical to improving police performance.

"It was pretty frustrating because we&#8217;d spent all this time mentoring them and then they were gone," said Lt. Col. Mike Mallin, the lead U.S. police mentor in Kandahar province.

With coalition and Afghan army troops stretched thin as they move to counter what is widely seen as a growing Taliban insurgency in the south &#8212; four Police Mentor Team members, including Mallin&#8217;s predecessor, Lt. Col. James Walton, were killed in June by a roadside bomb in Maiwand &#8212; the police are a critical front-line counterinsurgency force, officers say.

"Until we can give the people security, the ones who can effect change on the population are the Taliban," said Army Capt. Justin Ottenwalter, an active-duty officer attached to a police training team here.

But in Maiwand, the local police force now consists of a hastily assembled group of 105 men &#8212; barely half the authorized number &#8212; undergoing training in Herat.

Afghan police have long been seen as lagging far behind the Afghan National Army, with police training efforts led by the German military and, later, U.S. security contractor DynCorp viewed as largely ineffective. The U.S. military took over the training in January 2007, launching a program of embedded advisers modeled after the program for the Afghan army.

The so-called Police Mentor Teams, or PMTs, are designed as 16-member groups of senior officers and noncommissioned officers who have attended a special two-month course at Fort Riley, Kan. But the chronic troop shortages that have plagued U.S. efforts across much of Afghanistan have left commanders unable to field PMTs in some districts, while teams in the field rarely have more than a dozen members, many of whom are junior enlisted who haven&#8217;t attended the training course, Mallin and other officers say.

Officers say that having younger troops on the teams does help establish a rapport between the U.S. soldiers and the Afghans, many of whom are teens as young as 15.

Capt. Brian Bunting, 28, who was called up from the inactive reserves, serves as deputy team chief for the PMT working with the civil-order police in Maiwand. He said his unit of Afghans needs little help when it comes to fighting. Instead, his team has focused on establishing regularized logistics routines, convincing the Afghans to submit supply requests through their own system even though the requests rarely produce anything.

Part of the problem is that Afghan units are unfamiliar with the system and don&#8217;t put in requests, officers say, and part is that supply convoys are subject to frequent attack along the highway that serves as a tenuous lifeline to rural Kandahar. But hoarding, selling and stealing supplies is also a big problem, they say.

"Quite frankly, it comes down to corruption," Mallin said.

In the end, U.S. troops often end up providing essential supplies, but only after the Afghans have submitted a request through their own lines.

"We&#8217;re trying to get them doing the right thing so that when the Ministry of the Interior catches up they can hit the ground running," Bunting said.

U.S. officers are putting much of their faith on the Focused District Development program, an eight-week course where Afghan police units train together in the relative safety of U.S. bases &#8212; that&#8217;s where the reconstituted Maiwand police force is. Beyond basic soldier skills, the program enrolls Afghan officers in an automatic pay system and provides them with vehicles and other equipment.

"Driving around Kandahar, you can see a big difference between units that have been through the training and those that haven&#8217;t," Mallin said. "Most of these guys come in without any training and lack basic skills &#8212; how to do personal hygiene, how to maintain a weapon. A lot of them are very young."

In an area with an increasingly active insurgency &#8212; where U.S. officers say nearly every farmer grows the drugs that fund the fighters &#8212; commanders can only hope the police will grow up quickly.