Afghan health care at risk as international aid is scaled back 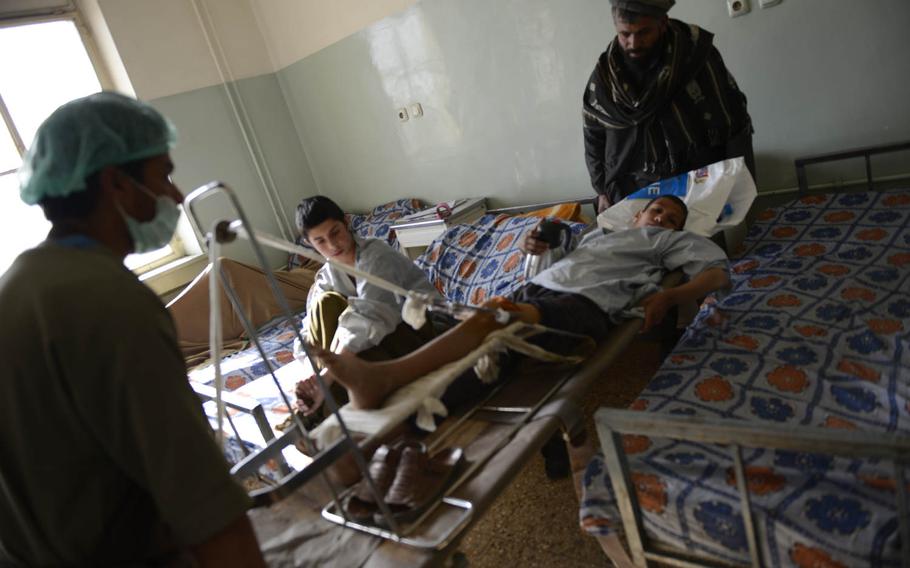 A boy with a dislocated knee is carried to a bed in a recovery room of Wazir Akbar Khan Hospital in Kabul in December 2014. Improvements in health care are one of the signature achievements of the international rebuilding effort in Afghanistan, but health professionals worry those gains are in peril. (Heath Druzin/Stars and Stripes)

A boy with a dislocated knee is carried to a bed in a recovery room of Wazir Akbar Khan Hospital in Kabul in December 2014. Improvements in health care are one of the signature achievements of the international rebuilding effort in Afghanistan, but health professionals worry those gains are in peril. (Heath Druzin/Stars and Stripes) 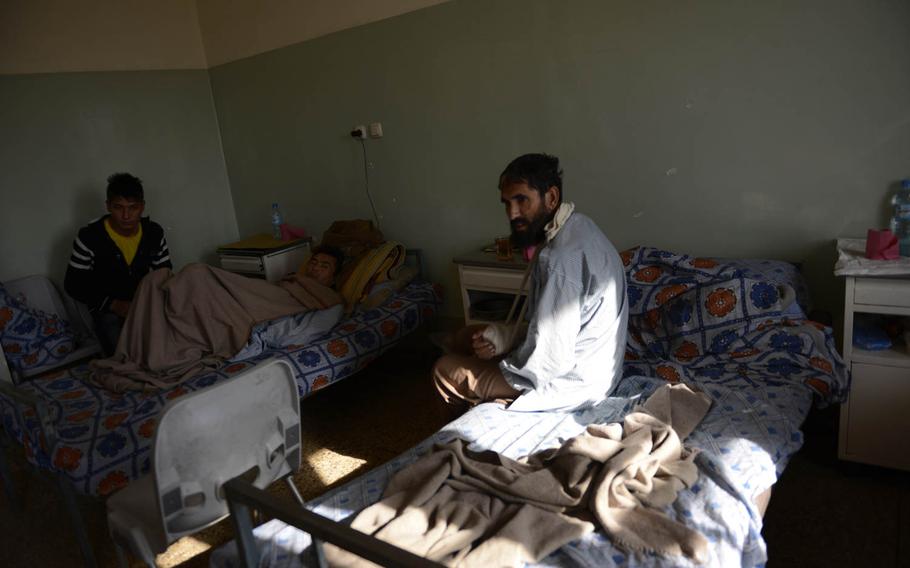 Patients pass time in a recovery room of Wazir Akbar Khan Hospital, one of the busiest in Afghanistan, in December 2014. Medical professionals say they are already seeing hard-fought gains in health care fade as international organizations scale back efforts in the country. (Heath Druzin/Stars and Stripes) 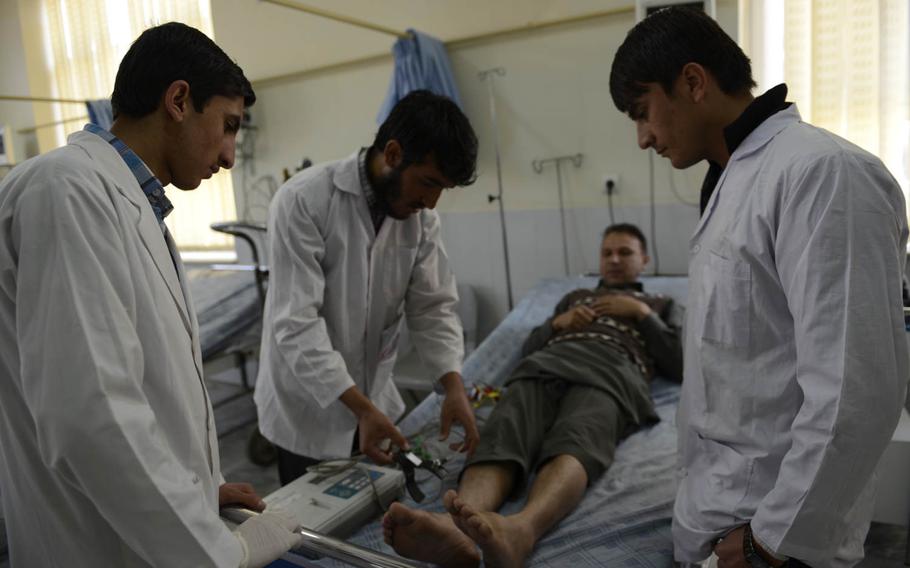 Doctors evaluate a patient in December 2014 in the emergency room of Wazir Akbar Khan Hospital in Kabul, which sees hundreds of patients per day, from car crash victims to those injured in suicide bombings. (Heath Druzin/Stars and Stripes) 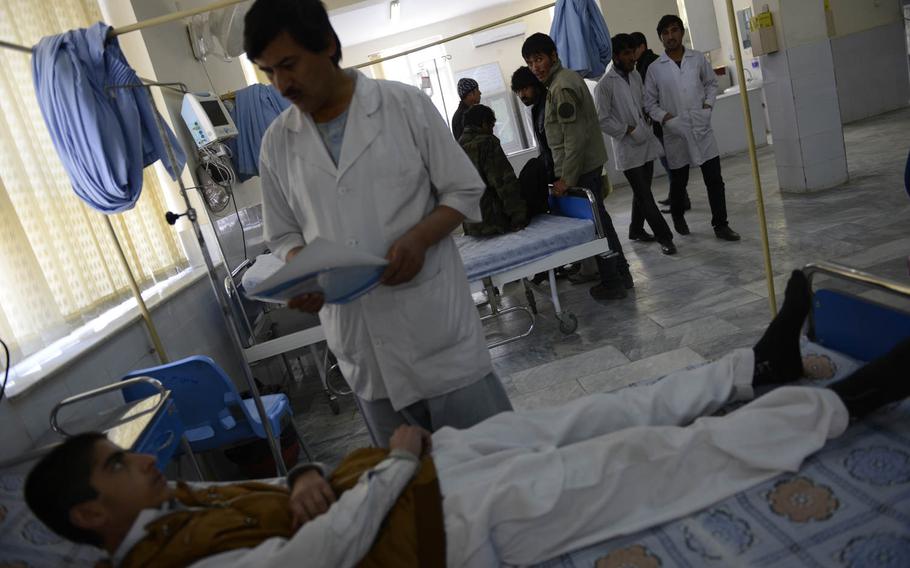 A doctor talks to a patient at the Wazir Akbar Khan Hospital in Kabul in December 2014. Medical officials worry that less international support could threaten health care gains made in the last 13 years. (Heath Druzin/Stars and Stripes) 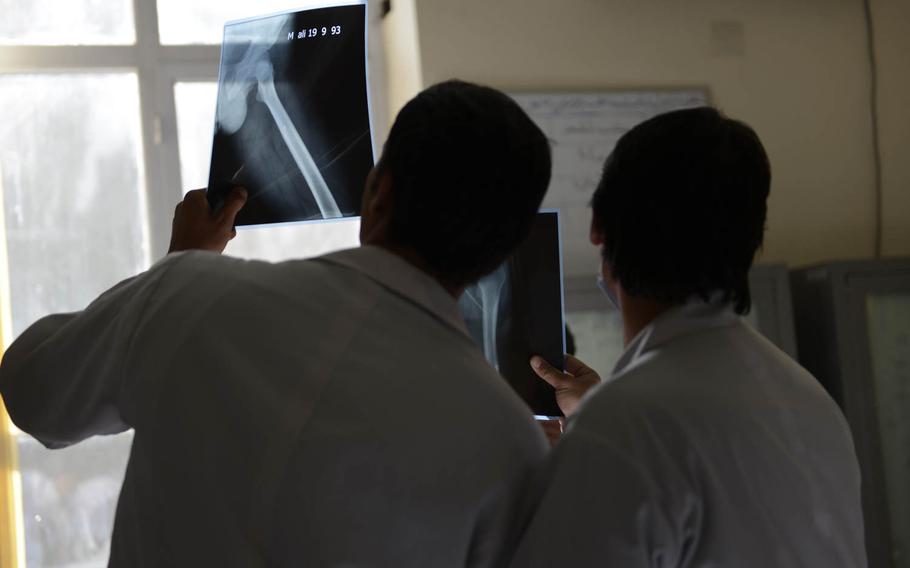 Doctors use sunlight to examine X-rays at Wazir Akbar Khan Hospital in Kabul in December 2014. After years of health care gains in Afghanistan, medical professionals say they are struggling to maintain and replace equipment. (Heath Druzin/Stars and Stripes) 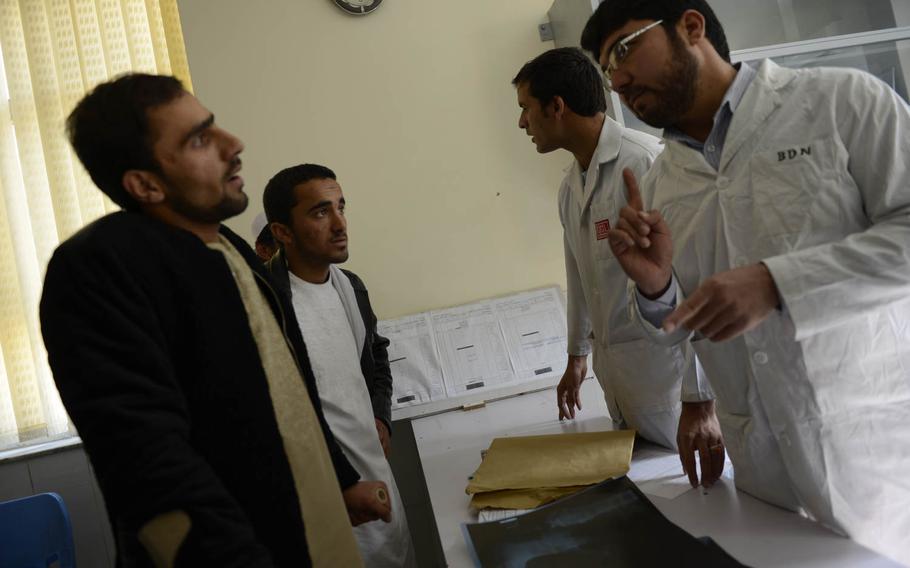 Orthopedic surgeon Ahmad Tariq talks to a patient in December 2014 in the emergency room of Wazir Akbar Khan Hospital, one of the busiest in Kabul. Officials worry that gains in health care may be in danger as international groups scale back efforts in Afghanistan. (Heath Druzin/Stars and Stripes)

KABUL, Afghanistan — At one of Afghanistan’s busiest hospitals, signs abound of one of the signature rebuilding successes of America’s longest war.

Afghans hobble into a spotless emergency room and are quickly seen by trauma specialists, including orthopedic surgeons. Modern equipment tracks heart rates, and health care professionals are careful to sterilize their equipment.

But everything is not as it appears at Wazir Akbar Khan Hospital.

A closer look at some of the heart-rate monitors reveals they aren’t working. What’s more, the X-ray technology here is outdated, there is a shortage of oxygen tanks and medicine, and doctors must work punishing hours to keep up with the steady stream of patients.

“We don’t have time to sleep,” said Ahmad Tariq, an orthopedic surgeon.

In key areas, health care in Afghanistan has undeniably improved since the Taliban regime was toppled 13 years ago. But some highly touted gains may have been overstated, and others are at risk as international militaries pull out of the country and aid organizations scale back their efforts.

Improvements in health care are one of the main success stories the international military coalition and aid groups like the U.S. Agency for International Development point to in Afghanistan. Maternal mortality has been reduced by 80 percent and child mortality by 60 percent, according to USAID; life expectancy has risen, and more rural Afghans have access to health care, though the extent of that improvement is debated.

The Afghan Public Health Ministry estimates that there are now 2,286 health facilities across Afghanistan, compared with about 500 in 2002, and 60 percent of Afghans are within one hour of a health clinic. But some watchdogs have criticized such numbers as misleading, as facilities vary widely in quality and some cited by both U.S. and Afghan officials may not even be in operation.

“It doesn’t mean we don’t have problems in health — we’re a long way to go to provide quality health care for the people of Afghanistan,” Qadir Qadir, director of policy and planning for the Public Health Ministry, said. “In terms of quality, we have a lot to do.”

Larry Sampler, the chief of Afghanistan and Pakistan operations for USAID, says he understands the concerns of health care professionals. But rather than diminishing support, his organization’s biggest challenge may be the uncertainty during this transition period and the fact that the unity government headed by President Ashraf Ghani is still finding its footing. Still, he says he is cautiously optimistic USAID, the biggest aid donor in Afghanistan, can build on the health care gains it has made.

“I will count it a success in Afghanistan if those doctors you’re talking to a year from now show a grudging acknowledgement that things are getting better,” Sampler said.

Wazir Akbar Khan’s medical director, Khalilullah Hodkhail, remembers fondly the early days after the ouster of the Taliban. Military doctors invited him and his colleagues to bases for training, and foreign doctors, in turn, could help rural Afghans lacking access to basic care.

“There was also peace and security, and we could take foreign doctors with us to rural areas without fear,” he said.

Those days are long gone. The countryside is largely a no-go zone for foreigners because of a virulent insurgency, and security rules make it difficult for Afghan doctors to visit their international military counterparts.

Hodkhail, a doctor himself who ran a children’s hospital during the Taliban regime, says conditions have greatly improved in the past 13 years because of support from the international community — better equipment, better training and new facilities. That has translated into much-improved outcomes for his patients. Recently, though, he’s seen that support begin to ebb.

His equipment is breaking down, and its becoming harder to find the money to fix or replace it. Furthermore, no Afghan-run hospital has a CT scan or MRI machine — equipment that would be considered standard in the West. He’s not optimistic this situation will change.

“When we lose the support of the international community to the Afghan government, we will lose the improvements we’ve made,” he said.

In one of the hospital’s bare recovery rooms, Zainullah sits with his 12-year-old son. The son’s plight represents both how much Afghanistan’s health care system has improved and how far it has to go. He has a condition that has caused severe deformities: His feet have grown at painful angles from his legs, and he cannot walk.

Zainullah left his farm and his other eight children in Helmand province, nearly 400 miles away, to find an orthopedic surgeon in Kabul to fix his child’s legs. It was a journey he could ill afford, but he didn’t see any other choice.

“We have to because we need to take care of our children,” he said.

Ten years ago, he wouldn’t have had an orthopedic surgeon to go to in Afghanistan, but even today advanced medical care is scarcely available outside Kabul. Those without the means are still cut off from such care.

Many Afghans, and disproportionately those in areas still seeing heavy combat, still lack access to basic health care, according to a December report by the Afghan Analysts Network. One in five Afghans surveyed by the network said someone close to them had died in the past year because of lack of access to medical care.

“The health system is frequently held up as a glowing example of the aid efforts of the international community, and since 2002 much progress has undoubtedly been made,” the report says. “But the rhetoric of many political and military actors about successes in this field diverges significantly from reality.”

One major challenge for hospitals like Hodkhail’s is finding qualified Afghan doctors. Many Afghan medical school graduates leave the country if they can; others never practice medicine, either because of low salaries or an unevenly enforced rule requiring new doctors to work in the provinces for two years as a public service. (Medical school is free in Afghanistan, and the requirement is a way to repay the debt to society.)

Omid, who asked to be quoted only by a nickname for fear of reprisal, said his medical career ended with his last day of class at Kabul Medical University. Instead of going on to practice medicine, he tutored foreigners in Dari, which he says was more lucrative and safer than going into medicine in Afghanistan. He estimates that just more than half of his classmates are practicing medicine, many of them from rich families that can subsidize their low salaries.

Omid finds it galling that classmates with connections will get posted in Kabul for their public service, while students like him have no choice and could end up in dangerous areas where the Taliban don’t hesitate to kill health care workers.

“Only when people have good connections are they posted here,” he said, speaking in Kabul.

Thousands of Afghans pay out of pocket each year to travel outside the country for specialty care, which is still scarce in Afghanistan.

“The burden of the costs is on the shoulders of the Afghan people,” Qadir said.

He says 80 percent of the ministry’s funding comes from international donors, and he’s already seeing that support fade as international organizations scale back their operations and spend less in Afghanistan. He hopes Afghanistan’s friends see that health and security are deeply intertwined.

“For sure, we are concerned,” he said. “We hope our donors will not disappear.”