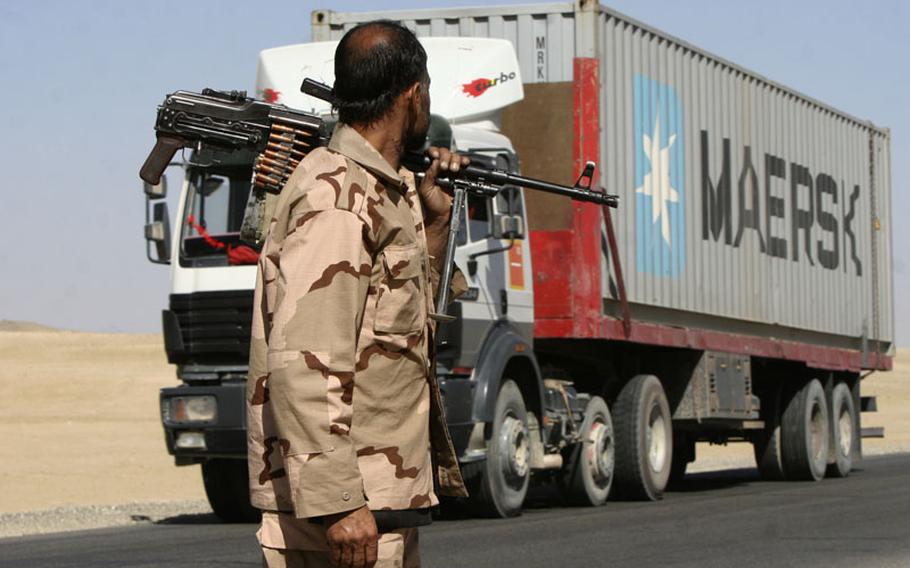 KABUL &mdash; A showdown between the Afghan government and the international community over the status of private security companies fizzled Monday, when Afghan officials reversed themselves and announced that most legitimate companies will be permitted to remain in the country for the time being.

While the Afghan government announced some measures to streamline the operations of private security companies to ensure they operate discreetly and are less disruptive to Afghan life, the real message was that the government of Afghanistan had the final say.

Concerns that President Hamid Karzai would go through with an August decree banning all but a small handful of private security companies were eased.

Such a move could have put at risk billions of dollars in international aid projects, since many international workers rely on private companies to guard them.

Instead, Gen. Abdul Manan Farahi, an advisor to the Afghan interior minister, said that while the government was disbanding 57 illegal security companies, there were 52 legitimate companies that can stay in place, as long as they follow the rules.

&ldquo;Those companies violating [the rules], even if they are guarding embassies, will be banned and will have to leave the country,&rdquo; Farahi said.

U.S. officials had publicly echoed Karzai&rsquo;s concerns, but privately expressed worry about the safety of aid workers, a statement echoed by President Barack Obama three weeks ago during a NATO conference in Portugal.

&ldquo;On the other hand, ... I can&rsquo;t send U.S. aid workers or civilians into areas where I can&rsquo;t guarantee their safety,&rdquo; Obama said. &ldquo;And so we&rsquo;re going to have to balance the issues of being sensitive to our footprint with the need to get certain objectives done.&rdquo;

Security companies will no longer be allowed to have offices in downtown Kabul and will be moved to the outskirts of the city. Farahi said 17 of 36 companies with headquarters downtown have already moved and the rest will be relocated by Dec. 17.

Companies will be subject to interior ministry review, and those offering security for development projects will be allowed to work out the duration of their contracts &mdash; some of which could last years. But they will not be able to renew those contracts when they run out, he said. Staff will not be able to carry their weapons off the project site or out of uniform, Farahi added.

&ldquo;Companies with prior contracts, for significant projects &mdash; these companies can work out their contracts,&rdquo; Farahi said.

In the meantime, the interior ministry was working to build the capacity of a security police force that will step in as these contracts expire.

Meanwhile, escort companies, whose reputation for outlaw behavior or reckless violence on the road were a key source of friction with the government, would now be under stricter regulations, Farahi said. These companies&rsquo; employees would no longer be allowed to do police-type actions such as stop traffic or search people or buildings, and they will be required to travel with police escorts.

Farahi said seven companies responsible for escorting NATO forces, among them Compass and White Eagle, will remain on the job until Afghan security police can replace them.

He said 50 security police officers have already been through training to escort those convoy security companies, to ensure that people in places like the southern Kandahar province, don&rsquo;t feel threatened by private security guards brandishing weapons.

&ldquo;There has been a significant decrease in such crime,&rdquo; Farahi said. &ldquo;The situation in Kandahar is better. People who were carrying weapons in Kandahar on behalf of private security companies are not doing that anymore.&rdquo;

Ferahi said the plan was to grow the ministry&rsquo;s security police to eventually take on greater role, like all convoy escort security. So far, the government has disbanded 54 companies, seizing 2,854 weapons. Another three companies would be disbanded by Dec. 17.

The government also set up a police emergency number for any Afghan wanting to report security company problems. Citizens who witness any wrongdoing by security companies were urged to dial 119 and file a report.