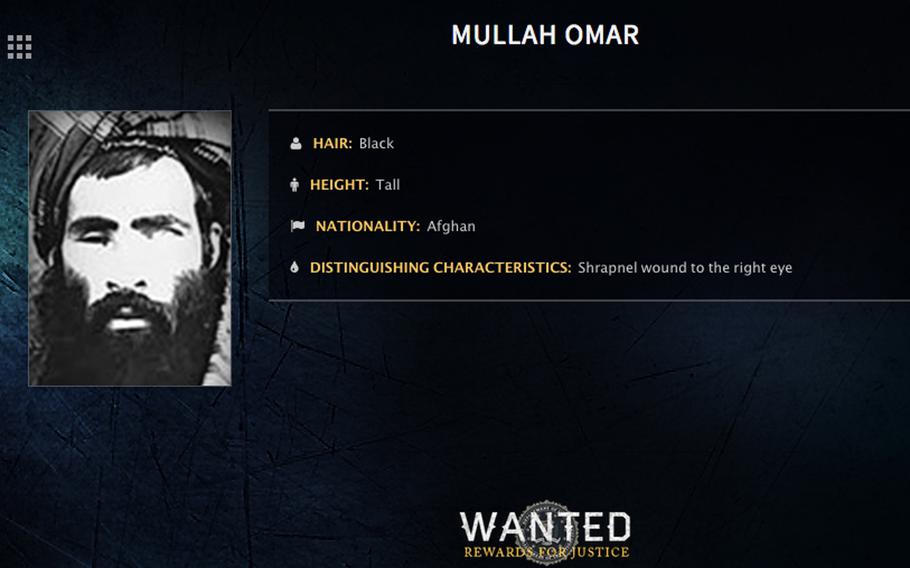 In this image released by the FBI, Mullah Mohammed Omar is seen in a wanted poster. The reclusive Afghan Taliban leader has backed peace talks with the Kabul government, saying in a rare message distributed to media Wednesday, July 15, 2015 that the goal of these efforts is an "end to occupation" by foreign forces. (FBI)

KABUL, Afghanistan — Mullah Mohammad Omar, the reclusive leader of Afghanistan’s Taliban insurgents who has not been seen in public since his movement lost power in 2001, died two years ago in Pakistan, Afghanistan’s government said Wednesday.

The announcement, which the Taliban denied, comes two days before the insurgent group and the government are scheduled to hold another round of exploratory peace talks. Mullah Omar has been the figurehead the Taliban have rallied around and if he is indeed dead, that raises questions about who is speaking for the insurgent group.

In a brief statement, the office of President Ashraf Ghani said the government, “based on credible information, confirms that Mullah Mohammad Omar, leader of the Taliban, died in April 2013 in Pakistan.”

“The government of Afghanistan believes that the paths for the Afghan peace talks are more paved now than before, and thus calls on all armed opposition groups to seize the opportunity and join the peace process,” the statement said.

Abdul Hassib Seddiqi, spokesman for the National Directorate of Security, said the intelligence agency had reported Mullah Omar’s death to the government and parliament in the past. It was not clear why the government did not announce his death sooner.

The announcement followed reports in the Afghan and Pakistani media earlier in the day about Mullah Omar’s death two years ago.

Taliban spokesman Qari Yousaf Ahmadi denied those reports and insisted that Mullah Omar is alive and well. “Some people and some media have claimed many times and spread the news of his death, which is baseless,” he told Stars and Stripes in a telephone call.

“We’ve seen the reports, and we believe them to be credible,” said Pentagon spokeswoman Henrietta Levin.

She declined further comment, but she said the Defense Department would continue to support Afghanistan, as it has.

The Taliban and Afghan government met for the first time earlier this month at a mountain resort near the Pakistani capital of Islamabad, and are due to hold their next meeting there Friday.

Earlier this month, a statement on the Taliban’s website, purporting to be from Mullah Omar, seemed to give tacit support to the nascent peace process. There are concerns, however, that those members of the Taliban who are engaged in peace efforts may not represent the interests of the entire movement.

The message attributed to Mullah Omar could have been aimed at shoring up support for the peace process amid a rift within the Taliban leadership.

“We were hearing that part of the Taliban supports peace talks and some of them oppose it,” said Jafar Kohistani, a political analyst and professor of law at Kabul University.

Over the years since he went into hiding following the 2001 U.S.-led invasion to topple the Taliban, there have been repeated reports of Mullah Omar’s death, which the Taliban have always denied. The government’s announcement seemed to be the most categorical to date.

The Afghan news agency Khaama Press said Afghan officials had received the news of Mullah Omar’s death from their counterparts in neighboring Pakistan. The Karachi daily Express Tribune reported that Mullah Omar, who is believed to have been born in the mid-1950s, had died of tuberculosis. It cited an unnamed former Taliban government minister who said Mullah Omar was buried on the Afghan side of the border.

The former minister also told the paper the Taliban leadership was meeting to elect a new head of the movement, which for the past 14 years has been conducting a bloody guerrilla war against U.S. and NATO troops and Afghan government forces.

The Express Tribune, citing Taliban sources, said there was speculation that Mullah Baradar, a founding member of the Taliban movement, was likely to take over as its top leader. Mullah Baradar was captured in Pakistan in 2010 and held until 2013, when authorities released him in an apparent effort to facilitate the Afghan peace process.

Mullah Omar, who lost an eye battling the Soviet Army as a guerrilla in the 1980s, fled Afghanistan at the end of 2001 when a U.S.-led coalition ousted the Taliban regime after the 9/11 attacks in New York and Washington. He was believed to be living in hiding along with other former members of the Taliban regime in the Pakistani border town of Quetta.

Graeme Smith, senior analyst with the International Crisis Group in Kabul, said that speculation about Mullah Omar’s possible death has been growing for the past six to eight months.

“You can see why the Taliban is interested in keeping his myth alive,” Smith said. “All these insurgent commanders scattered around the country have sworn allegiance to Mullah Omar ... it’s part of the glue that keeps the Taliban together.