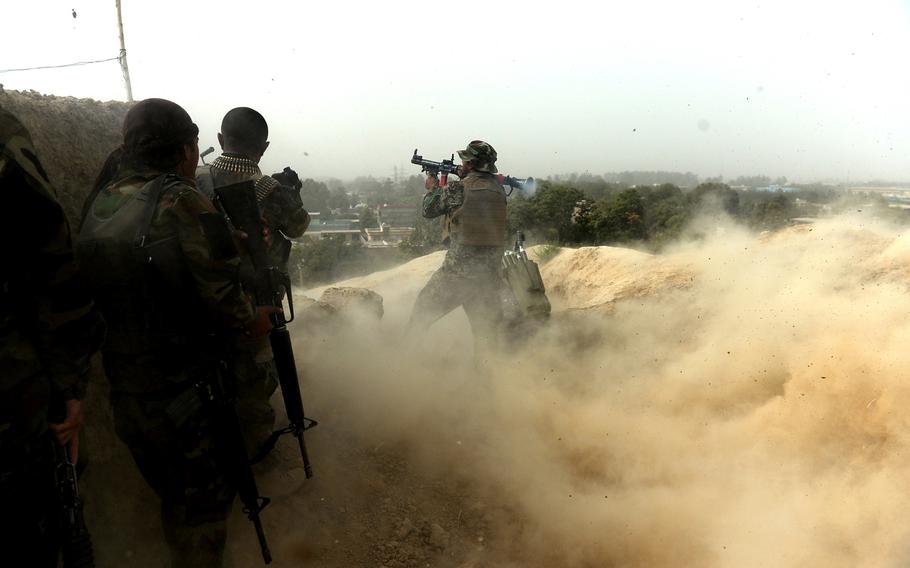 Buy Photo
An Afghan soldier fires a rocket-propelled grenade at Taliban positions on the outskirts of Kunduz in October 2015. Afghanistan's government lost control or influence in nearly 5 percent of its territory between January and May 2016, the Special Inspector General for Afghanistan Reconstruction said in its quarterly report to Congress. (Stars and Stripes)

KABUL, Afghanistan — Afghanistan’s government lost control of or influence in nearly 5 percent of its territory between January and May, a U.S. government watchdog said Friday.

Kabul’s control of districts dropped from 70.5 percent at the beginning of the year to 65.6 percent at the end of May as the Taliban made gains across the country, the Special Inspector General for Afghanistan Reconstruction said in its quarterly report to Congress.

SIGAR attributed the loss to a NATO-backed change in tactics that saw the redeployment of many Afghan troops from hundreds of checkpoints to free them up for offensive operations against the Taliban.

In response to the growing threat by the Taliban, President Barack Obama in June approved new rules allowing U.S. commanders to use American air power for offensive missions against the militants and to send troops to fight alongside regular Afghan forces. They were previously allowed to be used only with Afghan special forces.

After an assessment by Army Gen. John “Mick” Nicholson, the top U.S. military commander in Afghanistan, Obama announced earlier this month he would keep more than 8,000 troops in Afghanistan instead of reducing numbers to 5,500, as planned. Despite the Taliban’s ability to exert influence over more territory now than at any other time since a U.S.-led invasion ousted them from power in 2001, NATO spokesman Brig. Gen. Charles H. Cleveland said this week that the militants have yet to wrestle any significant areas from government forces.

“If you look at where they are today, they have yet to achieve any of their strategic objectives,” he said. “They have not seized any provincial capitals, while they have certainly contested a couple of district capitals and district centers, they have not been able to hold any of them.”