Afghan general: There are a lot more Taliban fighters than previously thought 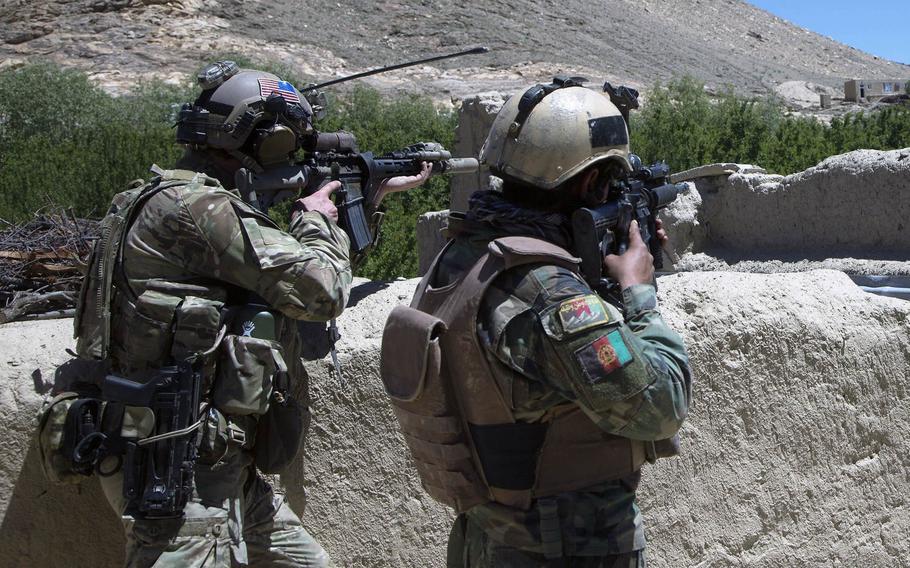 An Afghan commando and a U.S. Special Forces soldier scan the horizon for enemy movement during an operation to find Taliban leadership in Wardak province, May 24, 2018. (Paul Sale/U.S. Army)

KABUL, Afghanistan — A top Afghan general said Monday that more than 77,000 Taliban and other militants are now fighting against the government – more than double earlier U.S. and Afghan estimates despite a large increase in U.S. airstrikes over the past year.

“It is proven that 77,500 enemies, of whom 5,000 are foreign fighters and 3,000 are Daesh militants, are carrying out activities against our country’s peace and stability,” Gen. Laal Jan Zaheer, commander of the Kabul Military Training Center, told Tolo News. Daesh is an Arabic acronym for the Islamic State.

It was not immediately clear how Zaheer arrived at that figure, which provided a rare public assessment of enemy numbers.

Zaheer’s assessment — which others quickly disputed — underscores just how difficult it is to pin down whether the U.S. and its allies are eliminating their enemies on a significant scale.

NATO Resolute Support said in January that its estimates of the Taliban’s strength are limited to “informal assessments and conjecture, as there is no formal tracking or census mechanism.”

A report by the lead inspector general for the U.S. mission in Afghanistan said NATO estimated that 25,000 to 35,000 full- and part-time Taliban fighters were in the country as of September last year, which is up from about 20,000 following the U.S. force drawdown in 2014.

The general’s estimate came on the eve of a weeklong cease-fire declared by the Afghan government on Taliban fighters in the days surrounding the holy days of Eid. The Taliban have declared their own three-day cease-fire.

Zaheer’s numbers are much higher than the estimates of the Afghan military — 30,000 to 40,000 fighters, according to Mohammad Radmanish, acting spokesman for the Defense Ministry. He said Zaheer’s figures were his own opinion.

The estimate of 77,500 suggests that the Taliban is controlling and contesting more territory and that it’s comfortable deploying more forces, said Chris Mason, a professor at the U.S. Army War College who has researched Taliban and Afghan security forces numbers.

“The significance of the fact that the number has increased almost 100 percent in the last five years is not in the number itself, but rather that the Taliban believes this many men are now operationally relevant and necessary for their current campaigns,” said Mason, a retired foreign service officer who served in 2005 as political officer for the provincial reconstruction team in Paktika.

The Taliban leadership can deploy as many fighters from Pakistan as it deems necessary, Mason said. But each area can support only a certain number of guerillas without creating a backlash among the citizens; therefore, the amount of territory controlled or contested by the Taliban must have gone up since the last estimate, Mason said.

According to an April report by the Special Inspector General for Afghanistan Reconstruction, militants control or contest almost 45 percent of the country.

Dawlat Waziri, then-spokesman for the Defense Ministry, told Stars and Stripes in February that it was difficult to get a fixed number of the Taliban militants but that some 40,000 to 60,000 are always active throughout the country.

“Summer they are fighting, winter they go back to Pakistan,” Waziri said. “As many as they lose (casualties), they recruit from (religious schools) in Pakistan.”

U.S. officials said in April that there were between 600 and more than 1,000 ISIS militants.

Resolute Support spokesman Lt. Col. Martin O’Donnell said last month that he wanted to keep the Taliban and the local branch of ISIS — known as ISIS-Khorasan — in the dark about coalition estimates of their strength lest it give them some advantage.

“The fact is that the number is constantly in flux due to the porosity of the border, arbitrary allegiance changes and most significantly our active targeting and removal of this threat to both Afghanistan and the world,” O’Donnell said. “Wherever IS-K materializes, they will be eliminated. The same holds true for the Taliban, who have a choice: Reconcile or die.”

“The Afghan government has known for a while that the numbers were inaccurate because it has been dealing with the insurgency,” said Kamran Bokhari, senior fellow with the Center for Global Policy in Washington. “The situation remains as bad as before.”

Other experts, while surprised at the increased figures, believe the new numbers may be inflated and a bid by Afghan generals to excuse failures in the war.

Rahmatullah Amiri, a Kabul-based researcher on the Taliban who works for the good-governance group Liaison Office, puts the number of active and trained Taliban fighters much lower — at 15,000 to 20,000.

“The Afghan government is under pressure from the Afghan people to answer their question: ‘Why can’t the Afghan security forces contain the Taliban or other insurgent groups?’” Amiri said. “In order to answer this question, the government says, actually they are fighting more than 30,000 people.”

About 14,000 U.S. troops are deployed to Afghanistan, an increase of about 3,000 over the levels that held for much of 2017. Most of the Americans deployed support NATO’s Resolute Support training and assistance mission, alongside 7,500 international forces, largely away from the battlefield.

Under a separate counterterrorism mission, a special operations task force of about 2,000 troops trains the elite government forces and accompanies tactical-level units.

Chad Garland and Zubair Babakarkhail contributed to this report.