Afghan forces reluctant to patrol villages where insurgents may have support The remnants of a multi-story residence in the village of Haki Kalay, in Khost province, Afghanistan, is said to be a former home of Jalaluddin Haqqani, the leader of the Pakistan-based insurgent network that bears his name. U.S. Army soldiers and Afghan forces patrolled the village in a December operation. (Steven Beardsley/Stars and Stripes) 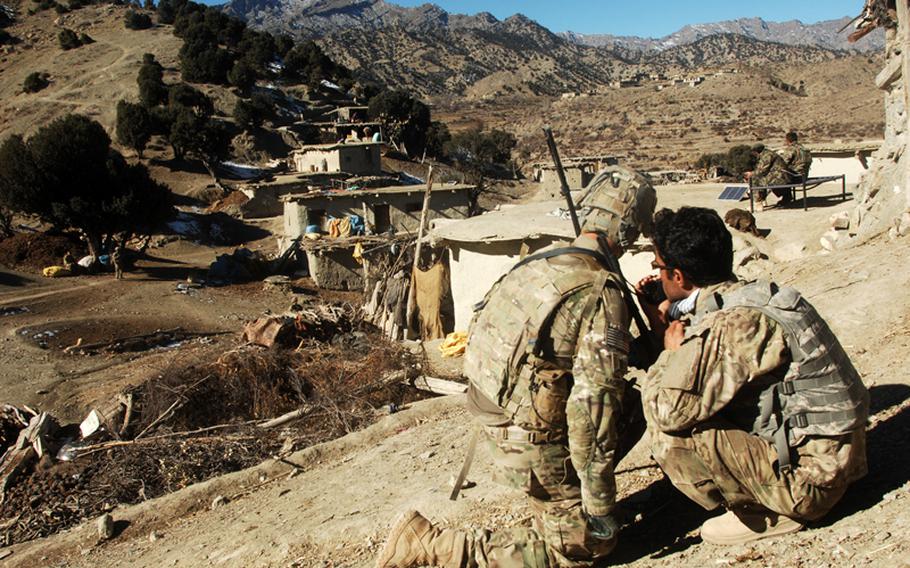 An interpreter, right, leans into the radio of 1st Lt. Raphael Moyer, a platoon leader from A Troop, 1st Squadron, 33rd Cavalry Regiment, during a December clearance operation with Afghan forces in the village of Haki Kalay, Khost province. The Afghan soldier on the other end of the conversation was also using a U.S. radio strapped to a soldier. The radios used by the Afghan soldiers had proven unreliable in the mountainous terrain, one of many deficiencies that made complex operations difficult for that unit and others. Steven Beardsley/Stars and Stripes (Steven Beardsley/Stars and Stripes) Yet with a push from their U.S. partners, Afghan soldiers and police recently patrolled this mountain-perched village, where U.S. commanders say residents aid the movement of weapons and explosives inland from Pakistan.

Intended as a show of force and a confidence booster for Afghan soldiers and police, the recent daylong clearance operation also exhibited how reliant they remain on NATO coalition resources, from radios to roadside bomb protection and the evacuation of injured.

Nestled among the mountain ridges of western Khost province, Haki Kalay lies southwest of the Khost-Gardez Pass, a critical route for goods flowing into and out of Afghanistan and a gateway to the country’s interior for insurgents coming from Pakistan.

Commanders and advisers are now urging Afghan forces to move off the road and into the surrounding villages, where they say insurgents find support. Yet Afghans are reluctant, citing the threats of roadside bombs and enemy fighters, according to Lt. Col. Donald Evans, commander of the 1st Squadron, 33rd Cavalry Regiment.

Evans recalled being told by the local Afghan battalion’s intelligence officer that one village was home to 500 insurgents.

A U.S. company under Evans had made three trips to Haki Kalay since September and taken fire twice, soldiers said. Although both attacks were essentially potshots, a hostile enemy had to be expected.

That meant U.S. planners needed to be in charge. While Afghan forces were leading 85 percent of operations in the eastern part of the country as of September, many of those were routine patrols, according to a December report by the Pentagon.

Air support and constant communication, for example, would be critical during the operation. Yet neither could be fielded by the 6th Kandak units entering Haki Kalay. Their FM radios were largely ineffective in the mountains, leaving them with little ability to communicate with each other, headquarters or artillery gunners. Many used cell phones.

Because U.S. and Afghan units would merge for the operation, Afghans could borrow U.S. radios when they needed to communicate with their squads or other units.

American helicopters were to provide air support, including medical evacuation and reconnaissance. And while U.S. and Afghan soldiers entering Haki Kalay would convoy along a dried stream bed, several units were entering a separate village by airlift, also provided by U.S. helicopters.

The ground approach proved problematic, as well. Because Afghan vehicles are lightly armored and lack equipment to counter roadside bombs, they convoyed to Haki Kalay between the heavier U.S. trucks.

Planners even shortened the length of the operation to fit Afghan capabilities, scrapping overnight operations to run a daylong mission (Afghans lack night-vision, for one).

Even the bottled water and Clif Bars eagerly grabbed by Afghan forces at the staging point before the operation were provided by Americans.

Once they arrived in Haki Kalay, the Afghans handled much of the clearance operation on their own, although U.S. soldiers drove the pace. They found little in the village and suffered no casualties, but they were able to meet residents who had seen little of local forces.

For Evans and Johnson, those successes were crucial. Inspiring confidence in local forces, they say, is the crux of their deployment.

“I think when they come back and start talking among themselves, they’ll say, ‘That wasn’t so bad,’ ” said Johnson.

Yet after the operation, an Afghan platoon leader named Dudula suggested his unit’s confidence was tied to the kind of combat support that, so far, only coalition members can provide.

“We’re comfortable doing this kind of operation,” he said, “if our government supports us with air force, ammunition and weapons that we need.”