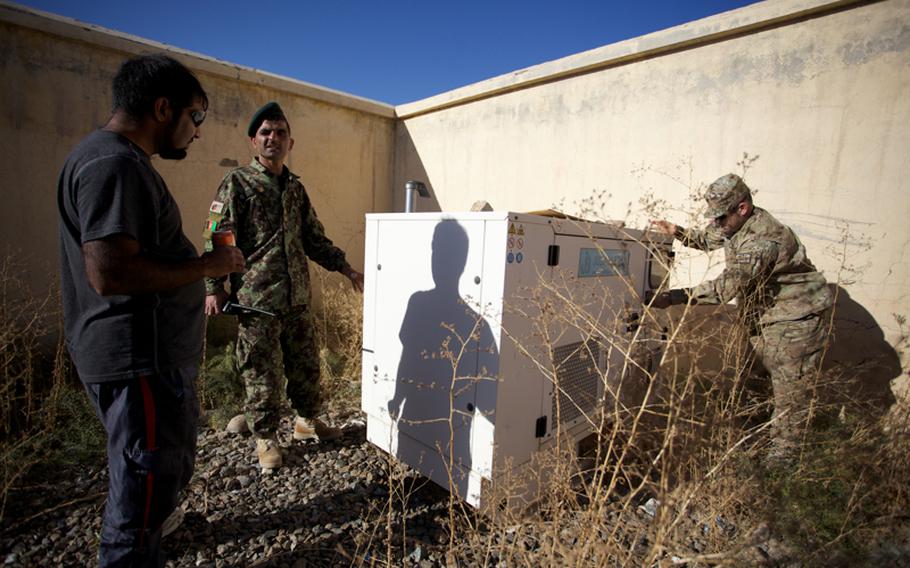 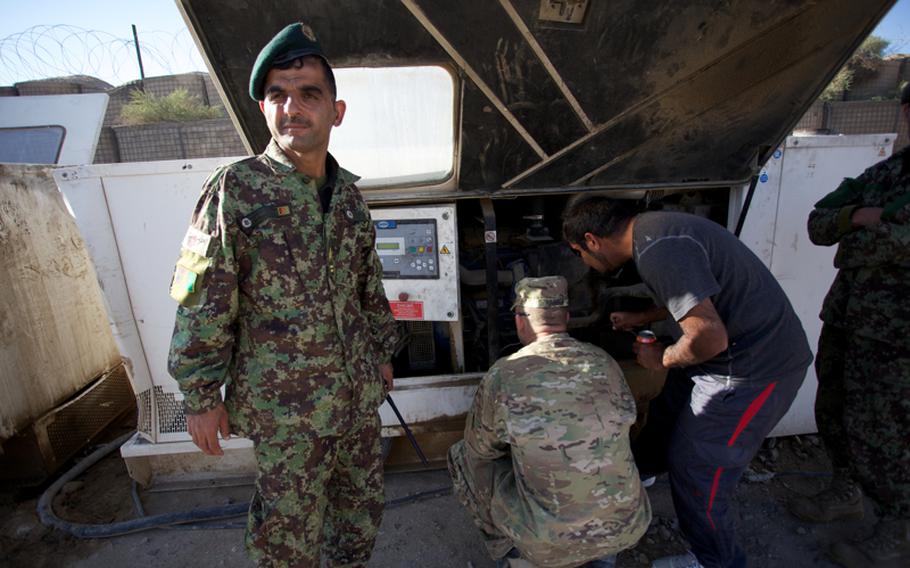 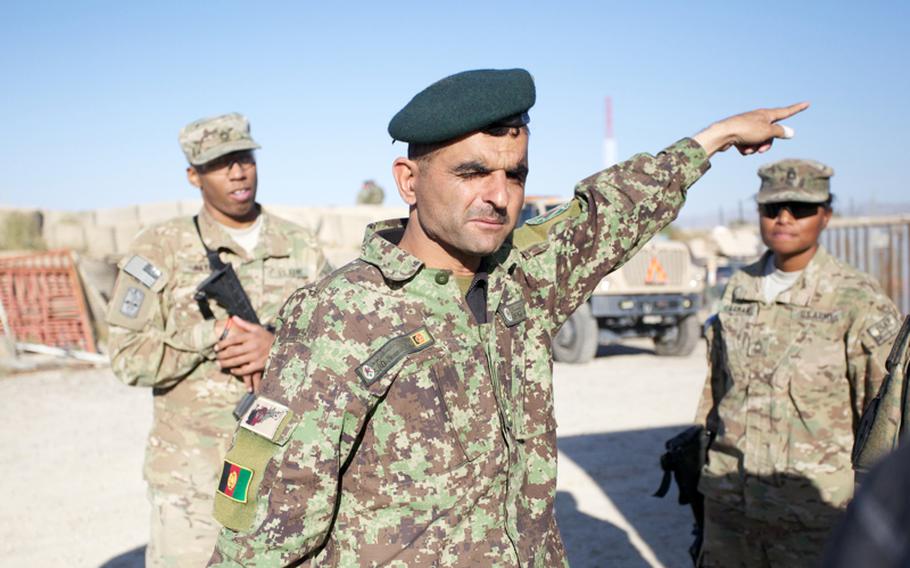 Buy Photo
Afghan National Army Sgt. Maj. Neamatullah asks for wood for outdoor pit toilets his men dug after the plumbing in their bathroom broke. Rather than fix it, they resorted to going to the bathroom outside. (Matt Millham/Stars and Stripes)

FORWARD OPERATING BASE BULLARD, Afghanistan &mdash; It was a couple of minutes before he was due to meet with his Afghan counterparts about their busted water heater when Staff Sgt. John McBean ducked back into his office.

It wasn&rsquo;t a pun.

Six months after arriving in Zabul&rsquo;s Shajoy district, Company B, 1st Battalion, 24th Infantry Regiment, is slowly closing the tap of American assistance &mdash; or at least the perception of assistance &mdash; to the Afghan soldiers next door as part of the U.S. plan to transfer responsibilities to Afghan forces. That transfer includes handing off combat duties and a raft of other jobs, including logistics.

It has led to some heated exchanges, with the Afghans accusing the Americans of abandonment for denying some of their supply requests, and the Americans questioning how the Afghans ever survived without U.S. aid. Like coalition units all over Afghanistan, Company B is trying to provide just enough support to assuage the Afghans&rsquo; concerns without seeding a culture of entitlement and dependence.

&ldquo;You&rsquo;re walking that tightrope on denying them assistance and making them more independent,&rdquo; said 1st Sgt. Donald Hansen of Modale, Iowa, the senior enlisted man in Company B. &ldquo;It&rsquo;s a real fine line.&rdquo;

While many Afghan units are proficient enough to get by on patrols, logistically the force is a shambles. If the agenda of an Afghan army logistics conference held in Zabul last month is any indication, the brigade stationed in the province is starting from square one.

The Afghan kandak, or battalion, adjacent to Company B is like many Afghan units, relying on American forces to provide basics such as field rations, materials and parts for building, and vehicle repairs and the personnel to carry them out.

&ldquo;They won&rsquo;t even go out on a mission with us without Halal meals, and we&rsquo;re like, &lsquo;Order them,&rsquo; &rdquo; McBean, from Pendleton, Ore., said, bringing up a recent discussion he had with an Afghan sergeant major whose infantry company, next door to the Americans at Forward Operating Base Bullard, ran out of the packaged food they bring on patrols.

When the Afghans balked at having to procure their own, McBean jokingly asked the man, Sgt. Maj. Neamatullah, how he fed himself before the Americans came.

&ldquo;What do we do when we want food? We order it,&rdquo; McBean said.

Even when it appears supplies are coming through the Afghan system, they&rsquo;re usually being handed to Afghan units at a higher echelon by coalition forces that then monitor, to varying degrees of effectiveness, their transfer to lower-level Afghan units.

Instead, Company B submits the same request in parallel through their own supply chain.

&ldquo;We&rsquo;re trying to reinforce their belief in their supply system,&rdquo; McBean said. &ldquo;So they submit the MOD-14,&rdquo; an Afghan Army supply request form, &ldquo;and we&rsquo;re like, &lsquo;Oh, look, we got your stuff,&rsquo; when really, it&rsquo;s not coming.&rdquo;

A key part of last month&rsquo;s logistics conference was teaching Afghan supply soldiers how to fill out and submit the form, a simple yet crucial requirement with which many were unfamiliar.

The commander of coalition forces in Zabul, Col. Blake C. Ortner of Stafford, Va., said it&rsquo;s unrealistic to expect the Afghans to pick up logistics, which requires a fair amount of administrative skill, as quickly as they&rsquo;ve learned to conduct combat operations &ldquo;when a bulk of them can&rsquo;t even read or write,&rdquo; he said. &ldquo;That&rsquo;s a distinct challenge.&rdquo;

At this point, U.S. officers here said, it&rsquo;s more about getting Afghans used to their system and to stop expecting American units to supply them than it is about actually withdrawing support. Such short-term goals are modest, but challenging.

More than a month ago, higher headquarters gave the Afghan commander at Bullard a stack of cash, which he was supposed to put toward base repairs, such as the broken water heater, broken toilets and other repairs.

Since then, the higher command of the Afghan kandak at Bullard has routinely denied supply requests, forcing the Americans to step in and overtly hand out supplies to keep the unit running.

Such rescues haven&rsquo;t helped the company&rsquo;s attempts to foster a sense of independence. When he wanted hot water for showering, Neamatullah went first to Hansen and McBean to solve the problem. Neamatullah wanted them to run a power line from their side of the base to the Afghan side to power their water heater. Both soldiers knew what they were going to tell him before they met with him: No.

&ldquo;I want to help them,&rdquo; Hansen said, &ldquo;but I don&rsquo;t want to do it for them.&rdquo;

Hansen ended up giving the Afghans electrical wire to run from their own generator to the water heater, and connected it himself. When it turned out the heater still didn&rsquo;t work, he refused Neamatullah&rsquo;s request for parts and told him to buy a new heating element in the bazaar.

Even though he suspects corruption within the unit is the reason the Afghans&rsquo; supply requests are being denied, he continues to give them support for fear of what will happen if he doesn&rsquo;t. Company B took a sink-or-swim approach, hoping the Afghans would step up and learn to take care of themselves. Instead, they sunk. Vehicles broke down, their generators died and they refused to patrol.

Hansen said he spent the first months of his deployment repairing Afghan equipment and relationships, and doesn&rsquo;t want to repeat the mistake again.

Those relationships appear solid now, even as the company turns its attention to the Afghan police, whose supply system is in even greater disarray.

&ldquo;I get no help from the government or the police,&rdquo; said Sardar Mohammad, who oversees about 75 police in Shajoy, Zabul&rsquo;s most populous district. &ldquo;Bravo Company supports me a lot,&rdquo; as does the company&rsquo;s battalion headquarters.

Company B gave the police clothing and boots, and dispatched a soldier to Kandahar and asked its battalion higher-ups to investigate why supplies and equipment for the police aren&rsquo;t getting to Shajoy, said the company&rsquo;s commander, Capt. Brian Harber, of Northfield, Ohio.

Nobody knows just what&rsquo;s happening to the requests.

It could be that the Afghans are ignoring them, expecting the U.S. to step in and provide supplies as they&rsquo;ve done for years. The U.S. soldiers, meanwhile, are struggling to get the Afghans to understand that the Americans won&rsquo;t supply them forever.

When McBean asked Neamatullah what he was going to do after the Americans left, the wily Afghan swept his arm in an arc over Bullard and its hundreds of millions of dollars in U.S. communications equipment, tents, armored trucks and Stryker combat vehicles saying, &ldquo;I will have all this.&rdquo;

&ldquo;I&rsquo;m not leaving anything. I&rsquo;m taking it all with me,&rdquo; McBean told him seriously, then asked again, &ldquo;What are you going to do?&rdquo;

The sergeant major smiled, as if McBean were joking.