Afghan flight medics get training from the ground up 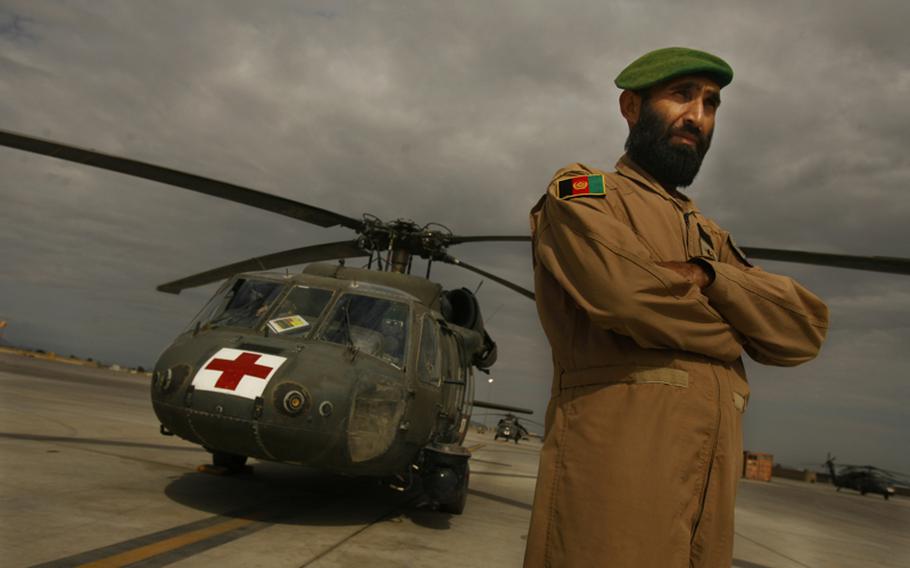 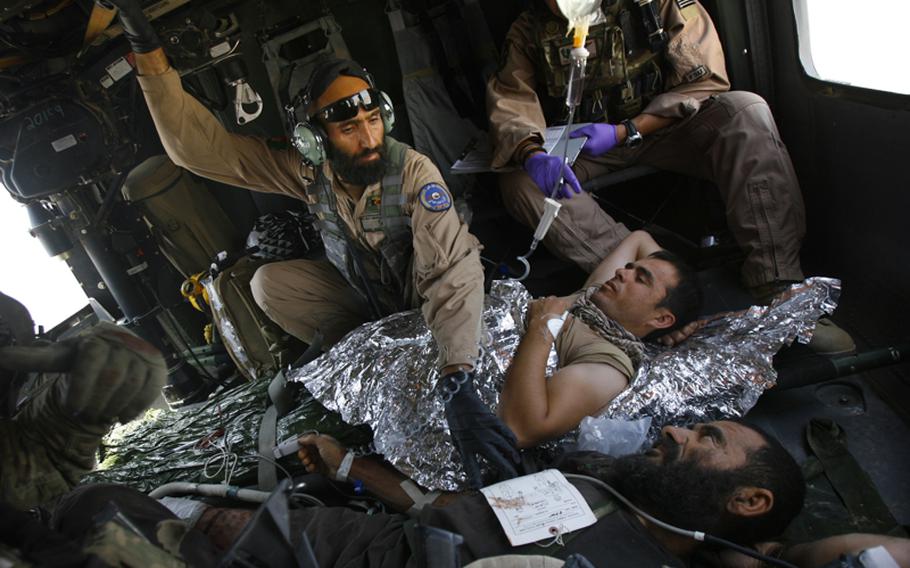 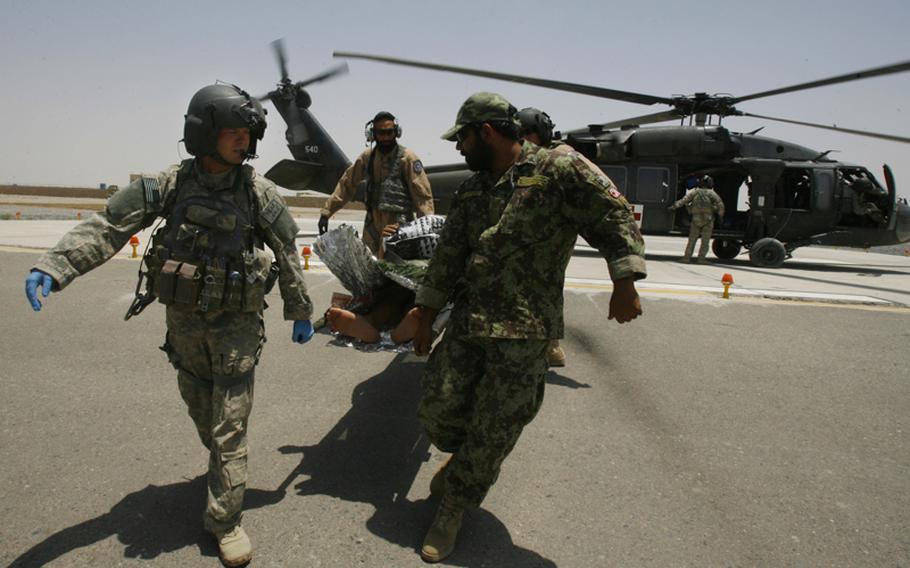 KANDAHAR AIRFIELD, Afghanistan &mdash; As the public continues to grow weary of the longest war in American history, and drawdown of some U.S. troops looms, officials here are looking for increasingly creative ways to sustain the hard-earned gains of 10 years of war. In nearly every way, the off-loading of responsibilities to Afghan security forces has become a priority.

Not long ago, Afghan air force Sgt. Gulap Ahmadzia was working as a janitor in a health clinic. Before that he struggled to grow potatoes and onions as a farmer near Kabul. For Ahmadzia, the first medic to complete the mentorship program, the opportunity has been transformative.

&ldquo;Because of this, I&rsquo;m serving my people, my country. Before I was working only for myself,&rdquo; Ahmadzia said through a translator. &ldquo;I am optimistic for my country.&rdquo;

Aside from training medics to treat patients in the back of helicopters, the program exposes the Afghans to traumatic battlefield injuries, which they rarely see working in the aid station at the Kandahar Air Wing at Kandahar Airfield.

&ldquo;We&rsquo;re trying to expose them to the amputations, the gunshot wounds, the RPG blasts, things of that nature, in order to allow them to take over the entire medevac whenever U.S and coalition forces leave,&rdquo; said Company C Staff Sgt. Kyle Clark, who along with Pinnell, developed the training curriculum.

&ldquo;It&rsquo;s very good that they&rsquo;re getting this hands-on experience in real time and not simulated. Just in that aspect alone, this program has been very successful,&rdquo; Clark said.

Because of a lack of health care services or infrastructure in Afghanistan, many missions flown by U.S. medevac crews are to help Afghan civilians &mdash; Pinnell estimates 1/3 of missions in the southern provinces, though in less populated areas, it can be 65 percent or more &mdash; and the fledgling government is still unable to provide any sort of ground ambulance service for its citizens. &ldquo;Right now, the current evac for the country is to call a cab,&rdquo; Clark said.

The U.S. soldier-mentors recognize theirs is not an easy task. While they&rsquo;re confident the medics will be qualified, they know that Afghans will be hard-pressed to maintain a fleet of helicopters as coalition forces draw down.

But Pinnell believes the training alone will make a lasting difference, and that even if the government is unable to maintain its fleet of Russian- made Mi-17 helicopters, medics will be able to apply their medical skills to ground evacuations.

&ldquo;The platform or the vehicle doesn&rsquo;t matter. It&rsquo;s still the same treatment whether you&rsquo;re driving or flying,&rdquo; he said. &ldquo;You can&rsquo;t compare them to an American standard. You just can&rsquo;t do that because they don&rsquo;t have the resources. It&rsquo;s building the structure here that&rsquo;s going to make the difference. It allows for Afghans to take care of Afghans.&rdquo;

Currently, the Afghans in training fly 12-hour shifts twice a week with U.S. medevac crews, and serve as the primary caregivers to all local nationals. Their American counterparts, who provide oversight and guidance, have been impressed by their medical skills, dedication and eagerness to learn.

&ldquo;When you watch them in the back, they truly care about what they&rsquo;re doing. They want to take care of that patient to the best of their ability. They&rsquo;re very proactive,&rdquo; Clark said.

According to Pinnell, there&rsquo;s little difference in the way U.S and Afghan medics take care of patients, however, one variance is rather significant. When they first begin flying, Afghan medics will look to treat the least injured first, the notion being that the severely injured have little chance of survival in Afghanistan. U.S. soldiers have learned to teach new recruits to treat the worst injuries first, showing them that they can save the lives of the severely wounded.

While Ahmadzia says he remains optimistic about the future of Afghanistan, he worries that the current government couldn&rsquo;t stand on its own without coalition help. When he travels to Kandahar city, he&rsquo;s careful not to wear his uniform for fear of Taliban reprisal. Ahmadzia says, if he were to don even a T-shirt revealing his status as a soldier, he would be attacked.

But U.S. soldiers are determined to stay in the fight.

&ldquo;Bottom line is, we&rsquo;ve invested 10 years into this fight. We&rsquo;re not going to quit at this,&rdquo; Pinnell explained and harkened back to the soldier&rsquo;s creed. &ldquo;In there it says I will not leave a fallen comrade, and that comrade is now an Afghan. No matter how you look at it, they are our comrades. As far as the medevac goes, that is our mind-set.&rdquo;