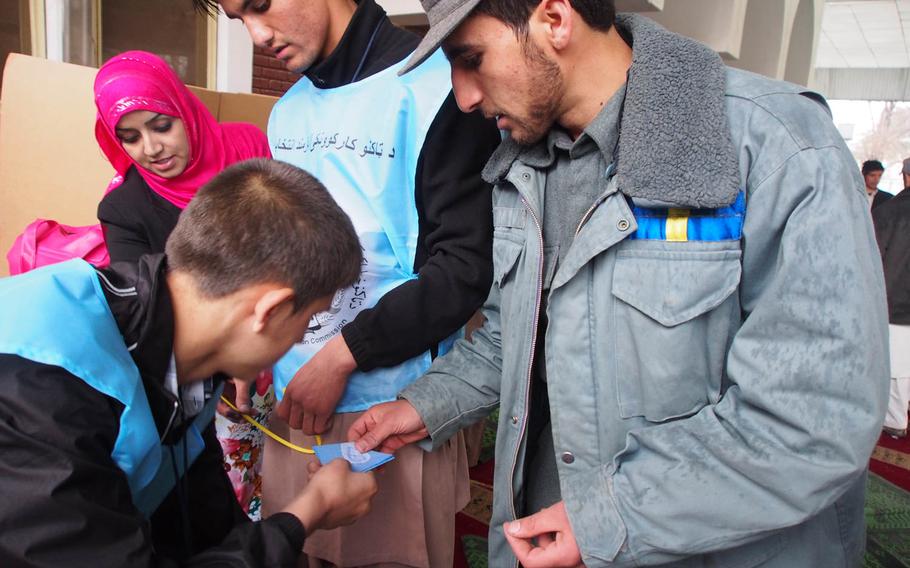 KABUL — As the glow of a successful presidential election fades, a picture is emerging of key post-election procedures taking place in secret and independent observers being kept in the dark while votes are counted and thrown out for irregularities.

Some independent election monitors say they are cut off from the vote-counting and vetting process, and have to rely on media reports. The Independent Election Complaints Commission — the body charged with the vital task of deciding how many votes are fraudulent — gave precious little information at a news conference Wednesday.

“The Election Complaints Commission is doing all things through the media,” said Naeem Asghari, program manager of the Free and Fair Election Forum of Afghanistan, the country’s largest independent election monitoring group. “Whenever they are investigating cases, at that time, the presence of civil society observers and candidate’s (representatives) is very important, but still our observers are not allowed in those meetings.”

Naeem Ayubzada, director of another domestic monitoring group, the Transparent Election Foundation of Afghanistan, said his observers are being kept so far away from the vote counting by the Independent Election Commission, Afghanistan’s main election body, that they can’t discern what’s happening. As for the complaints commission, he said his group had been given no access to the process of adjudicating complaints.

“If there’s no secondary organizations to approve (the process) it will be challenging to have good results that are accepted by the public and the candidates,” Ayubzada said.

While some foreign observer groups had representatives in the country for the election, many were pulled out ahead of the vote after a spate of high-profile attacks on foreigners in the capital. As a result, local monitoring groups have been at the forefront of policing the election process.

Independent Election Complaints Commission spokesman Nadir Muhseni told reporters his organization is investigating roughly 1,400 cases of possible voting irregularities, but he would not say how many of the more than 7 million votes cast the complaints could affect. Afterward, he denied his organization, whose members were appointed by outgoing President Hamid Karzai, had been barring observers from the complaints process.

“So far, we haven’t had any review of the fraud cases in Kabul, so that’s why we didn’t invite them (to meetings),” he said.

In the heavily disputed 2009 Afghan presidential election, more than 1 million of the roughly 5 million ballots cast were thrown out, meaning the post-election process has the potential of altering the outcome of the vote. Both Afghans and the foreign countries that have invested billions of dollars in Afghanistan’s reconstruction have high hopes that this election will be largely trouble-free.

The outcome of the vote is crucial to both the stability of the country and the legacy of the 12 1/2 year U.S.-led military effort here. Karzai, who is constitutionally barred from running for a third term in office, has been the country’s only leader since an American military invasion knocked out the ruling Taliban in 2001.

The spokesman for the Independent Election Commission, Noor Mohammad Noor, also rejected the observers’ complaints, saying that observers watch the vote count from when the commission opens in the morning until it closes at night.

“We provide full access to all observers,” he said.

The April 5 presidential election was widely hailed as a success, as there was little violence in the country’s main cities. Over time, though, it’s become clear there was widespread election-day violence in the countryside as well as numerous reports of fraud. Some members of the Afghan media have even admitted they downplayed problems to project the image of a triumphant election and failure by the Taliban to disrupt it.

Martine van Bijlert, co-director of the Kabul-based Afghanistan Analysts Network, said that it was hard for observers to follow exactly what was going on with the vote counting. But she said she’s more concerned about the lack of information the two election bodies have released relating to possible large-scale fraud and so-called ghost polling stations, which were closed to voters on election day but still recorded results.

“The part of the process that could sway the election is still very murky,” she said.

At Wednesday’s news conference, Muhseni repeated the mantra that no matter what happens next, the election was a success.

“The number of votes will decrease, but we cannot ignore that the people of Afghanistan bravely voted on April 5,” he said. “It cannot overshadow the whole process.”

The early handling of fraud complaints has stirred anger among some of the presidential candidates. After the announcement of preliminary results, the six candidates lagging behind frontrunners Abdullah Abdullah and Ashraf Ghani in initial results released a joint statement decrying the election process.

“During the April 5 election, the wise people of the country went to the polls and made history and we are thankful for them,” the statement reads. “Unfortunately, fraud has been perpetrated by government officials and workers and the election commissions - their job was to safeguard the vote, but the election commission misbehaved with the votes of the people, which is unforgivable.”