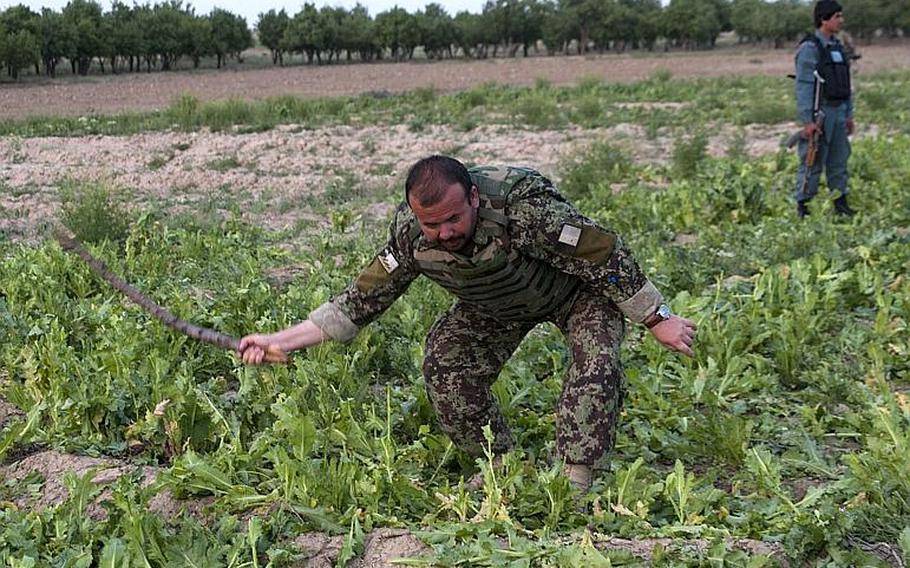 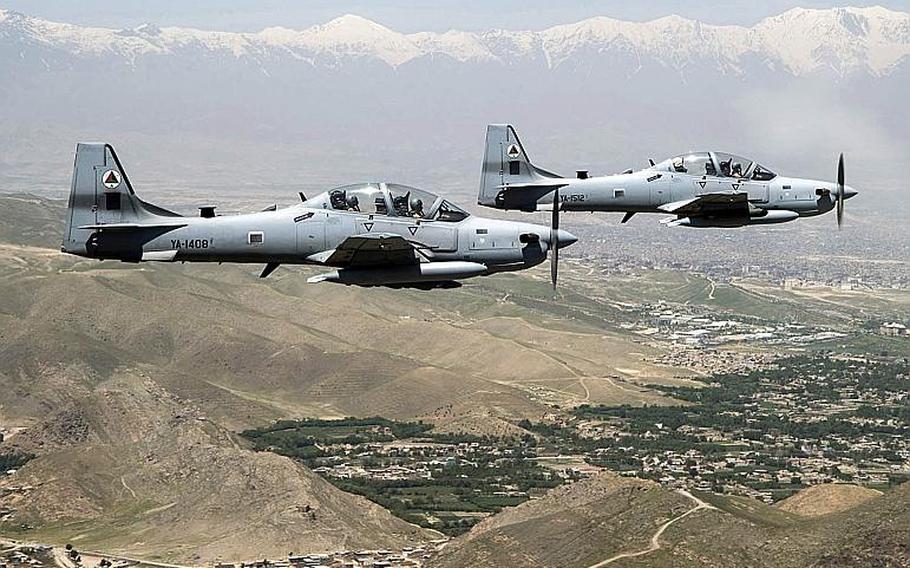 A two-aircraft formation of A-29 Super Tucanos fly over Kabul, Afghanistan, during a mission on April 28, 2016. (Larry Reid Jr./U.S. Air Force)

The drug trade in Afghanistan, which helps fund the insurgency and impedes reconstruction efforts, has grown stronger despite billions of dollars spent by the U.S. to fight it, a government watchdog said Thursday.

The Special Inspector General for Afghanistan Reconstruction, or SIGAR, said in a report that the U.S. needed a new strategy to fight drugs in the country.

SIGAR said while similar campaigns achieved short-term tactical successes in the past, they “only had limited impact on longer-term efforts to dismantle drug trafficking networks and cut off financing for the insurgency.”

“Ultimately, it is unclear whether targeting drug labs through an aerial bombing campaign is cost-effective or strategically wise,” the watchdog’s report said, adding that if the strikes mistakenly caused civilian deaths, they could alienate rural populations and strengthen the insurgency.

No program initiated by the United States has resulted in a lasting reduction in poppy cultivation or opium production, the report said.

When the U.S. and its allies intervened in Afghanistan in late 2001, poppy cultivation was at a historic low. Last year, cultivation jumped by 63 percent from the year before to a record high of about 1,265 square miles, or more than 20 times the land area of Washington, D.C., according to the United Nations Office on Drugs and Crime. The country currently produces about 90 percent of the world’s illicit opium.

“To put it bluntly, these numbers spell failure,” SIGAR boss John Sopko said Thursday at the report’s launch at the Washington-based think tank New America. “We must do a better job if we want to mitigate the ways that the drug trade undermines our goals in Afghanistan.”

Not only has the U.S.’s counternarcotics work been expensive — costing $8.6 billion between 2002 and 2017 — but many American troops, contractors and Afghan civilians have been killed or wounded in related missions, the report said.

Land controlled or contested by the Taliban, like that used for poppy cultivation, has reached an all-time high since 2001, according to official figures. The insurgents are now said to control or contest 44 percent of the country’s 407 districts.

“It is simply unrealistic to expect significant progress from counternarcotics efforts without being able to exert reasonable and persistent levels of control over land area and transport routes,” Sopko said.

U.S. Forces-Afghanistan has said the purpose of the strikes is to cut off Taliban revenue, not fight the drug trade itself.

USFOR-A estimates that 20 percent of total narcotics revenue ends up in Taliban hands.

SIGAR said better intelligence is needed to disrupt financial flows to insurgent and terrorist groups. The watchdog called on the U.S. director of national intelligence to annually assess funding obtained by the insurgency from the drug trade, which would help to develop better polices to cut off the financing.

The SIGAR report said a new U.S. counternarcotics strategy should include promoting legal work options for rural communities and fighting drug-related corruption within the Afghan government.

It also recommended eradication efforts be focused in government-controlled areas to increase the likelihood of lasting reductions in poppy cultivation and reduce the risk of alienating rural communities. “The findings of today’s report may be a bit depressing,” Sopko said Thursday, “but in the long run, we need to face the facts and build upon them to improve the future.”