Afghan desert is no place for a sailor, except when there’s a mission to fulfill 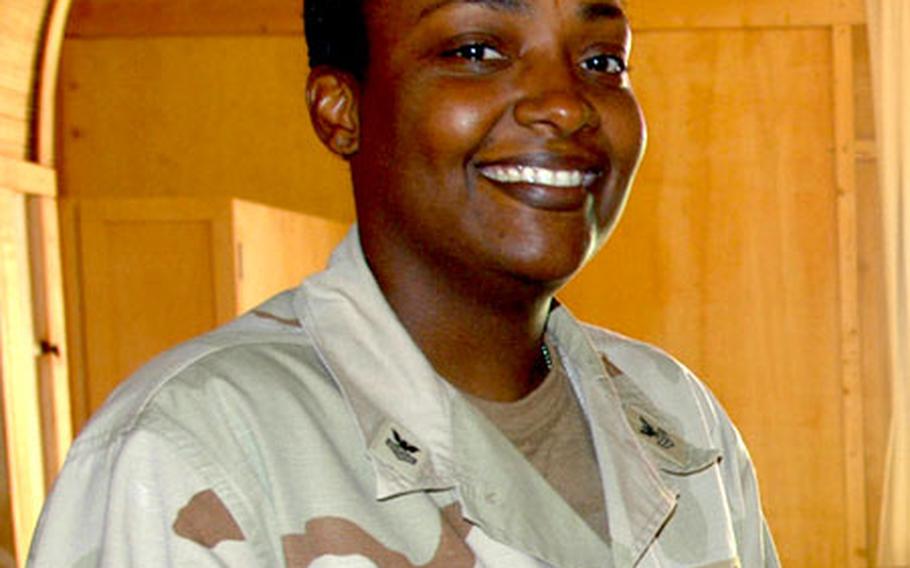 KANDAHAR, Afghanistan &#8212; In his desert camouflage uniform with a 173rd Airborne Brigade patch on his left sleeve, Chiakazia Ragin II may at first glance look like any other soldier.

The Navy petty officer 2nd class is a sailor attached to the brigade&#8217;s Combat Support Company for part of their current Afghanistan deployment.

The 25-year-old Brooklyn native is a machinist&#8217;s mate assigned to the Southeast Region Maintenance Center in Mayport, Fla., but has been deployed with the Army since April.

His trip from the American south to southern Afghanistan came about all because of a ringing telephone in his Mayport office.

When he answered, a voice on the other end told him to tell his fellow sailors that the Army was looking for an E-5 machinist&#8217;s mate to deploy to Afghanistan.

Less than a week later, the surface warfare specialist left Mayport for two weeks of ground warfare training at Fort Benning, Ga., and a flight to Bagram Airfield.

Convoying to Kabul from Bagram, Ragin found that Army officials had no idea what to do with him. After a week waiting in Bagram, he was told to fly to Kandahar and report to the combat support company.

&#8220;The way that Petty Officer Ragin fits into the system is he&#8217;s got a mechanical background, including [working on] pumps and electrical [systems],&#8221; Finley said.

One of Ragin&#8217;s main jobs is to visit the company&#8217;s assigned forward operating bases, where he assesses equipment and machinery, also checking on equipment repair work orders.

Visiting the outlying bases, Ragin said, is the highlight of his time in Afghanistan.

Ragin&#8217;s previous wartime experience was aboard the Yokosuka, Japan-based USS Kitty Hawk. The aircraft carrier launched helicopters loaded with special forces troops for the initial attack on Afghanistan in late 2001.

Ragin watched that launch, never expecting to actually visit the landlocked nation. Four years later, he finds himself deployed there as a member of the Vicenza, Italy-based Army airborne brigade rather than with a Navy unit.

But even understanding the term &#8220;leg&#8221; shows that the sailor is becoming more and more Army.

For chaplain&#8217;s assistant, a flock is still a flock, even in Army clothes

She serves as the noncommissioned officer-in-charge of the Fraise Chapel on Kandahar, with six soldiers working for her.

RP1 is Navy-speak for a religious programs specialist, which is Welch&#8217;s military specialty.

Despite the differences in services, being a chaplain&#8217;s assistant is the same in any service, Welch said.

When she returns to Great Lakes later this year, she&#8217;ll become a recruit division commander &#8212; the Navy equivalent of a drill sergeant. Her experience in Afghanistan, she said, will benefit both her and the sailors she trains.