Afghan deployment is a family affair for Guam National Guardsmen 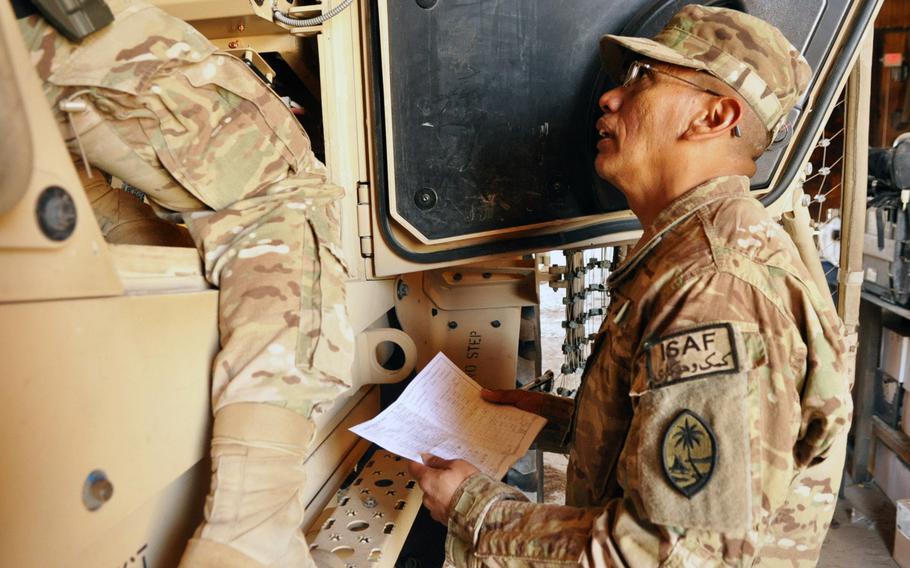 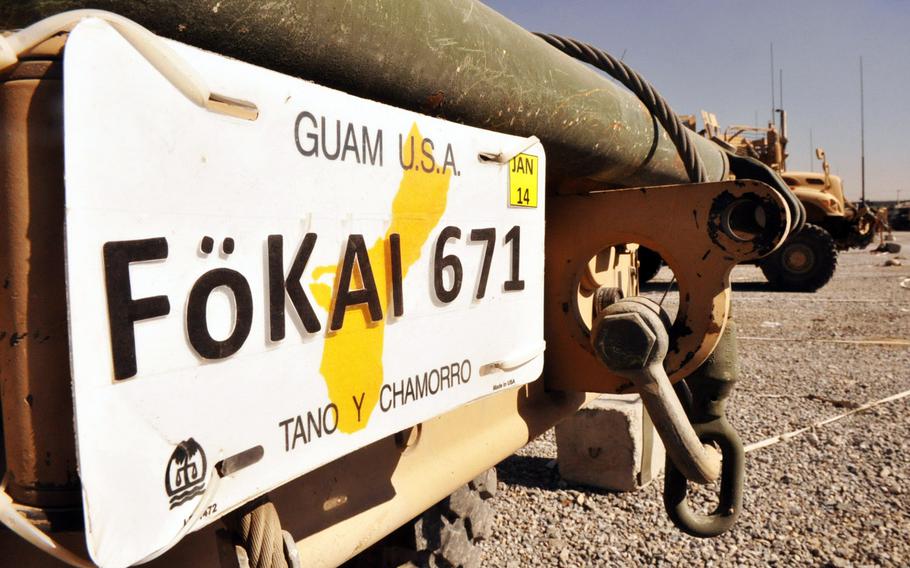 Buy Photo
A license plate on the front of an MRAP for Task Force Guam at Camp Phoenix in Kabul. The plate reads, "Tano y Chamorro," which means "the land and the people" in the Chamorro language spoken in Guam. Chamorro is also the word that refers to the indigenous people of Guam and the Mariana Islands where Guam is located. (Alex Pena / Stars and Stripes) 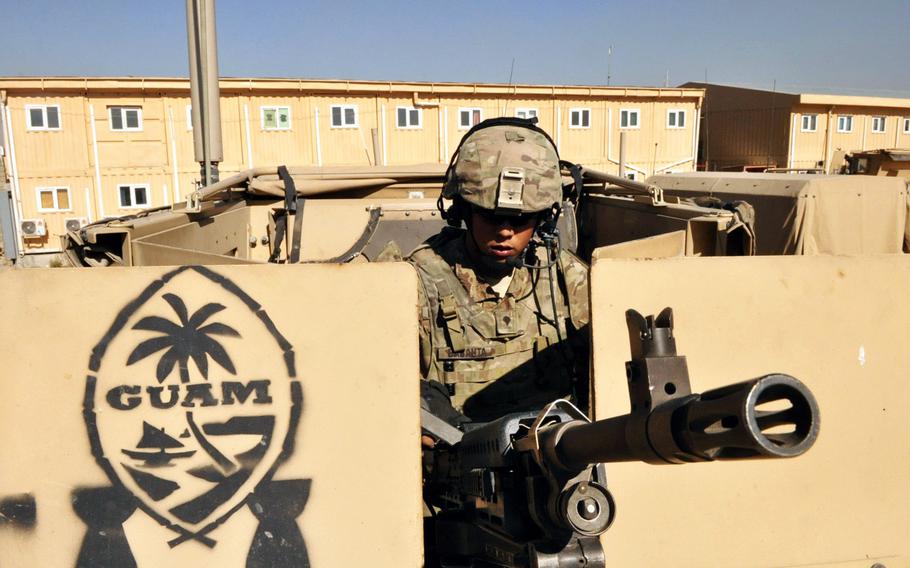 Buy Photo
Spc. Joshua Babauta, a gunner with Headquarters Company, 1st Battalion, 294th Infantry Regiment, loads his gun atop a MRAP in preparation for a security escort mission in Kabul. The logo painted on the gun's side shield is in the shape of a sling stone, representing the warrior culture of Guam's Chamorro people. (Alex Pena / Stars and Stripes) 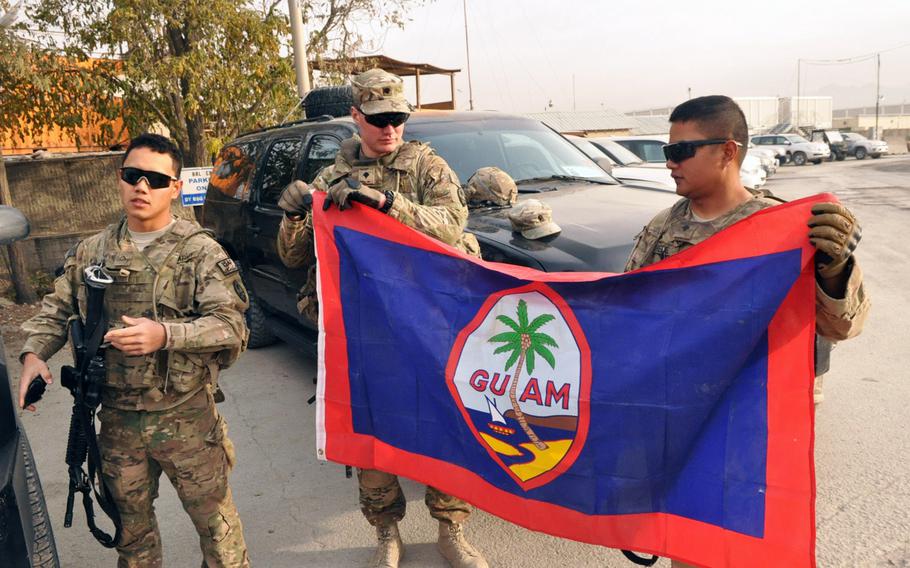 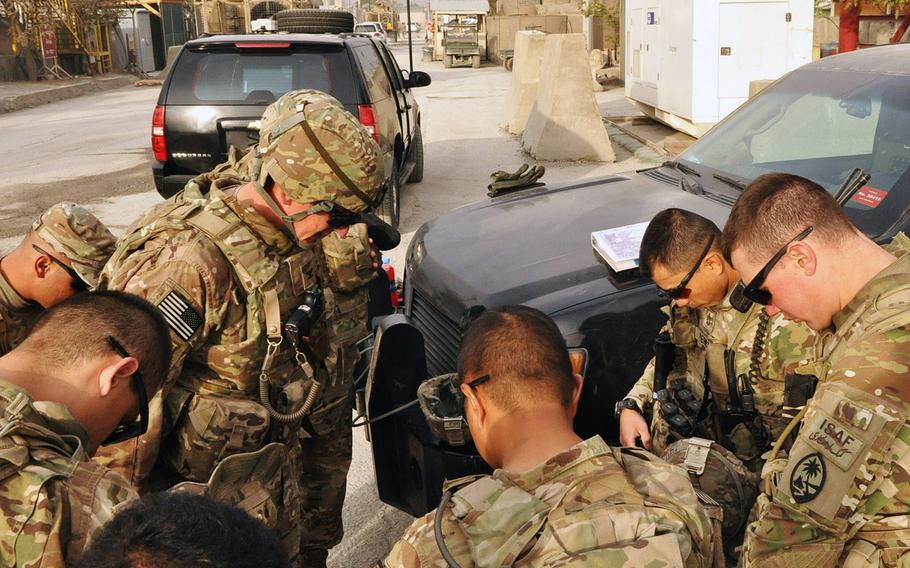 Buy Photo
Soldiers from the 1st Battalion, 294th Infantry Regiment, Guam Army National Guard bow their heads and pray before a security escort and guardian angel mission in Kabul. The Task Force includes a group of soldiers who sing at the Catholic mass every Sunday at Camp Phoenix in Kabul. (Alex Pena / Stars and Stripes) 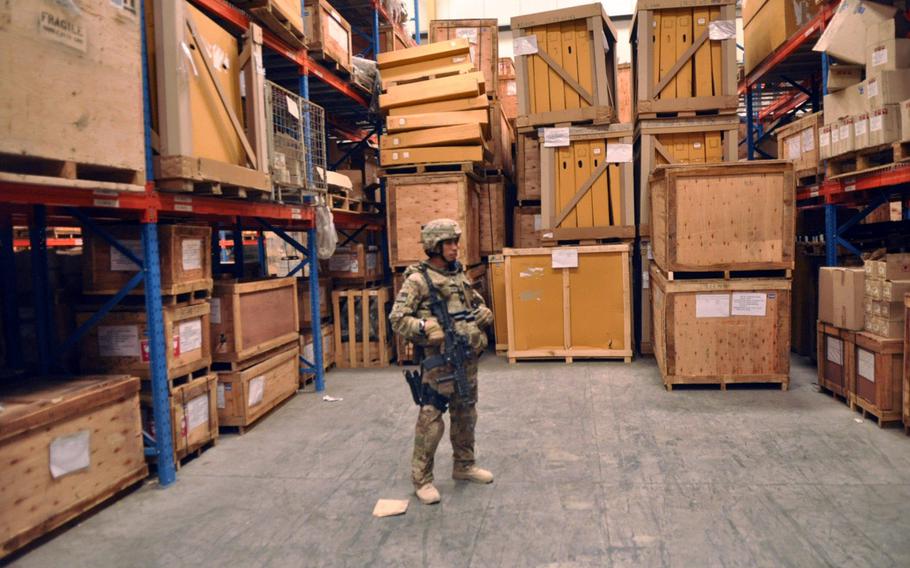 Buy Photo
Convoy commander Sgt. 1st Class Christopher D.L. Perez, who is with Task Force Guam's 1st Battalion, 294th Infantry Regiment, stands on guard inside an Afghan National Army supply warehouse in Kabul. Perez was on a guardian angel mission to protect a lieutenant colonel while he spoke with commanders in the Afghan National Army about supplies and logistics for their troops. (Alex Pena / Stars and Stripes) 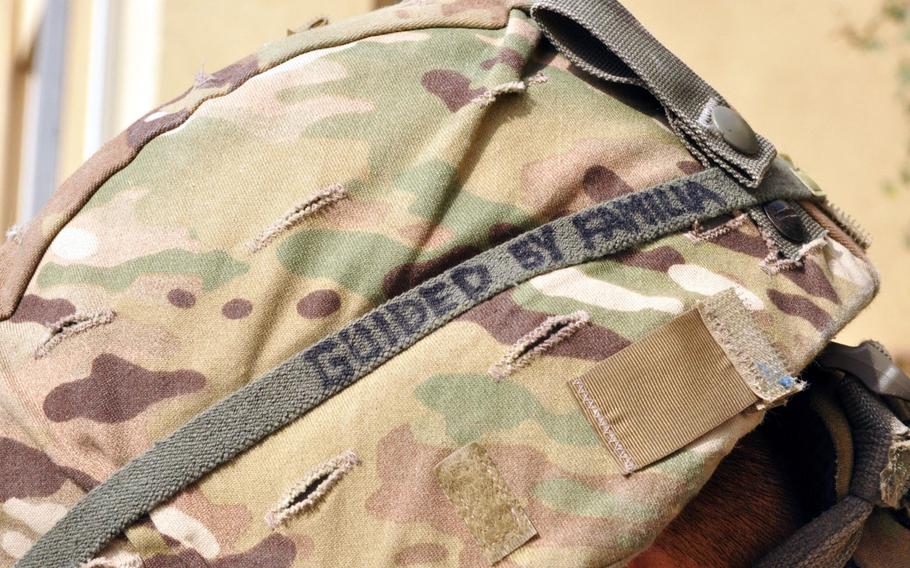 Buy Photo
The helmet of public affairs officer Sgt. Edward Siguenza, a California Army National Guardsman attached to Task Force Guam at Camp Phoenix in Kabul. Siguenza was born and raised in Guam before moving with his family to California in 2004. His helmet reads, "Guided by familia." (Alex Pena / Stars and Stripes) 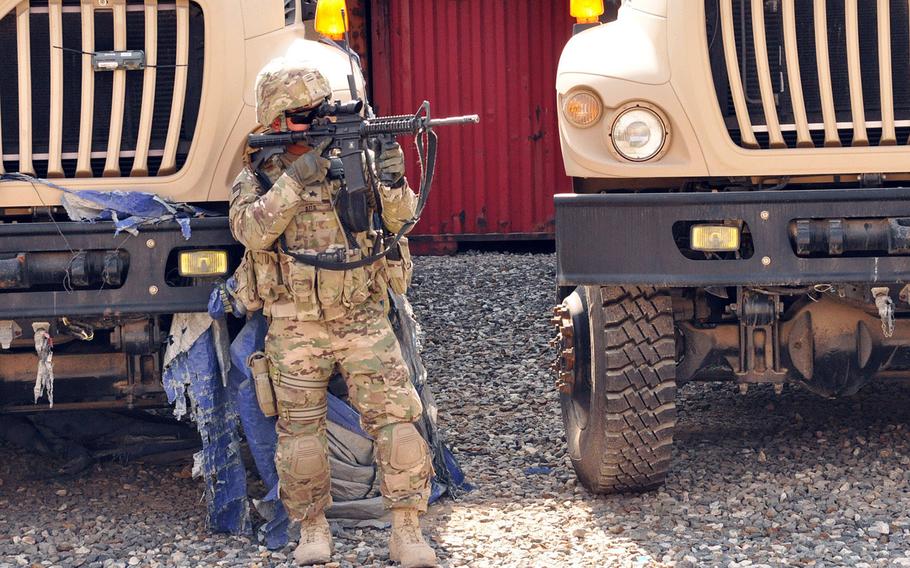 Buy Photo
Truck commander Sgt. Billy J. Ada uses his rifle to scout out the area inside the Afghan National Army's Central Issuing Facility after a bullet from an unknown shooter whizzed by a group of U.S., Afghan and Australian soldiers. Ada was on a guardian angel mission to protect a lieutenant colonel who was at the issuing facility to assist the Afghans with logistics. Ada suspected it might have been an accidental discharge from the AK-47 of an Afghan Army soldier in the area. No one was injured. (Alex Pena / Stars and Stripes) 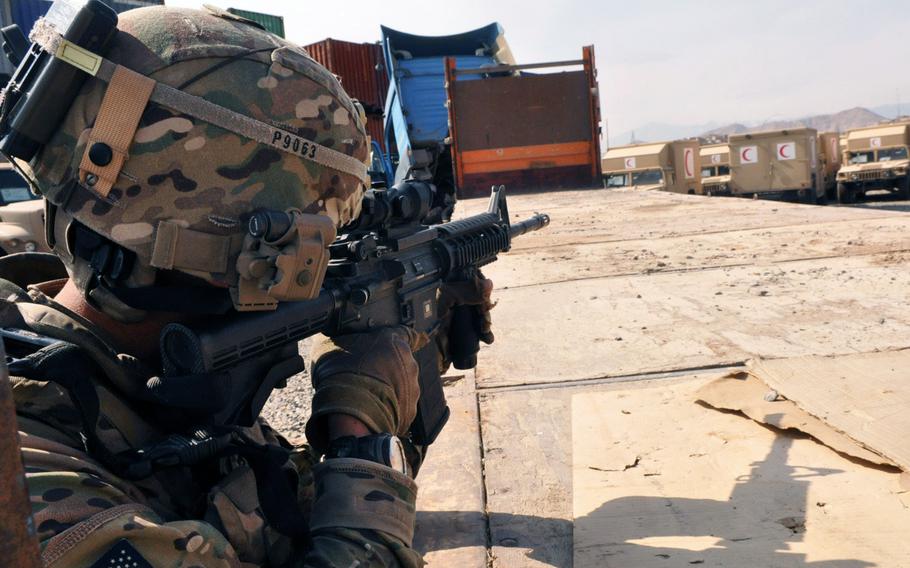 Buy Photo
Convoy commander Sgt.1st Class Christopher D.L. Perez uses the scope on his rifle to scout out the area inside the Afghan National Army's Central Issuing Facility when a bullet from an unknown shooter whizzed nearby. Perez was on a guardian angel mission to protect a lieutenant colonel who was visiting the compound to meet with leaders in the Afghan Army. No one was injured. (Alex Pena / Stars and Stripes) 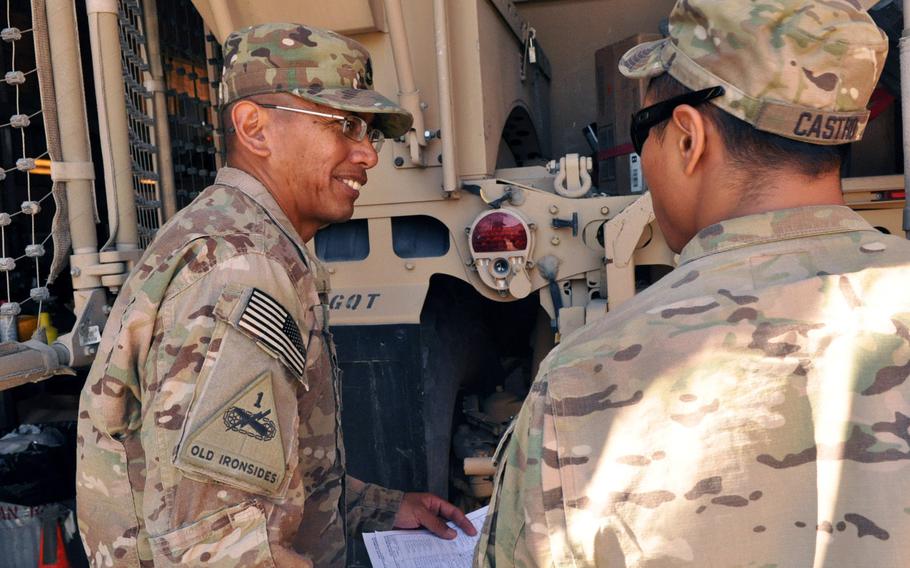 Buy Photo
Sgt. 1st Class Patrick J. Flores Sr., left, the platoon sergeant for Echo Company, 1st Battalion, 294th Infantry Regiment, Task Force Guam, discusses maintenance issues with his soldiers at Camp Phoenix in Kabul. Flores Sr. is in charge of making sure all the vehicles are prepped and ready for any mission the troops might undertake outside the wire. (Alex Pena / Stars and Stripes)

KABUL — Deployment to Afghanistan is a family business for Guam National Guardsman Sgt. 1st Class Patrick Flores Sr., who is based at Camp Phoenix in Kabul.

“My son, two nephews, two first cousins, two brother-in-laws, a sister-in-law, and a daughter-in-law,” Flores said, counting the names on his fingers, as he tried to account for everyone in his family who was currently boots on the ground with him in Afghanistan.

“I have at least one family member deployed in each regional command” of the International Security Assistance Force, he said.

Flores, who holds the most senior rank of all his family members in Afghanistan, is currently deployed on a historic mission for the young Army National Guard unit from Guam, a territory of the United States since World War II. The Guard unit has been in existence since 1981, when it originally had only 32 enlisted soldiers.

The Guam National Guard now has as many as 1,300 soldiers. Nearly half — 584 soldiers — are currently deployed to Afghanistan. The unit’s public affairs officer said there are 30 direct family pairs serving under the Task Force.

In early April, the unit left the cool island breeze of the Pacific, planting itself strategically across the landlocked, dry and desolate Afghan terrain.

Flores, who is ethnic Chamorro — the indigenous peoples of Guam and the Mariana Islands of the Pacific — smiles with elation when he talks about his son, Spc. Patrick Flores Jr., and his first deployment.

“When my son was growing up, he would look and see what his father was doing. I was his mentor, so he would look up at me and say, ‘I believe this is what I want to do, too,’” he said.

The senior Flores is currently platoon sergeant for Company E, 1st Battalion, 294th Infantry Regiment, under Task Force Guam. The unit operates multiple missions “outside the wire.” It conducts security escorts for contractors and military trainers and acts as “guardian angels” for high-ranking officials at meetings with leaders of the Afghan National Security Forces.

In the midst of the sometimes monotonous experience of lifeon a forward operating base, Flores Sr. received an October surprise.

“Hey, you’ve got a package coming,” the commander from his son’s unit told an unsuspecting Flores.

“They got me by surprise,” Flores Sr. said. “It was so heartwarming.”

Flores Jr.’s command organized the surprise visit to his father after a short mission at Bagram Airfield, which is a short flight away from his father’s base at Camp Phoenix in Kabul. The only problem, as it is for most parents, was letting him go.

“Growing up, I watched my dad go through multiple deployments. I watched him lead. That’s how I learned what sacrifice is all about,” Flores Jr. said in a phone interview from Camp Spann in northern Afghanistan, where he is based.

“It’s been kind of difficult to keep in touch, but it’s always good to hear from him when I can,” he said.

Flores Jr. is also deployed with his “other half,” as he puts it – Spc. Samantha Mallo, stationed at Kandahar Airfield in Regional Command South with Task Force Guam’s Fox Trot Company. They’ve been together for over five years, and Flores Sr. refers to her as his daughter-in-law.

Back Home on the Island In true Chamorro fashion, family always comes first. The word is on the tongue of every soldier and sketched in marker onto the Kevlar helmets of some.

“Guam’s a very close-knit community. We’re talking to the point where, in some cases, it’s hard to find people who aren’t related in some way,” said Lt. Col. Michael Tougher, battalion commander for Task Force Guam based out of Camp Phoenix. “Virtually everyone has someone in their family who is deployed.”

According to the World Bank, Guam’s Island population is slightly more than 162,000 people.

One soldier said he had given up on dating local women from Guam, “because after a few months, you end up finding out you’re related somehow.” So while sending almost 600 people off the island at once won’t bring the economy to a halt, preparations had to be made to limit the potential impact.

“About half of the Guam Army National Guard is in Afghanistan, which means that they are not in Guam, where they can perform support to civilian authorities in the event of a typhoon or earthquake – and Guam is prone to typhoons and earthquakes,” Tougher said. “A large number of our soldiers are firefighters, police officers, teachers — things like that. On top of those civil servants, pulling that many people out of the work force is felt. It’s a big deal.”

As members of an Army National Guard unit, most of the soldiers have civilian jobs back on the island. Flores Sr. works for the Parks and Recreation Department in Guam.

“We did a lot of briefings for the government,” Tougher said. “So they all understand what’s happening, and when we’re going to be back. We also leveraged the Employer Support of the Guard and Reserve, which encourages support from employers.”

“I have a lot of gratitude for the people of Guam. It’s not only the family of soldiers, but also the entire community on Guam,” Flores Sr. said. “They’re behind us, with their prayers, and with their support.”

Unfortunately, that support was needed early in their deployment. Twenty-two-year-old Spc. Dwayne Flores and 23-year-old Sgt. Eugene Aguon were killed just a month into their deployment when a suicide car bomb hit their convoy near their base in Kabul.

In a community like Guam, the deaths reverberated, causing anguish throughout the unit and the island.

“A lot of people knew these soldiers. They knew their mothers and fathers, and in a lot of cases, they were related to them through extended family,” Tougher said.

“Two casualties was too high,” he said. “We did make some adjustments in how we conducted our mission in response to that event.”

Family Tradition While most of the soldiers in the Flores family are deployed overseas, it’s still possible to come across an Army uniform back in Guam with the Flores insignia sewn on.

Flores Sr. has three daughters and two sons. His 25-year-old daughter, the oldest of his children, is in the military reserves in Guam. His second-oldest daughter, who is 21, is in the Reserve Officers’ Training Corps program at the University of Guam.

“She’s going to be an officer,” he said proudly. “My other son, 15 years old, is in the ROTC program at his high school. He looks up to his brother,” Flores Sr. said.

And while his wife, Norma Jean Flores, is not in the military, he considers her of equal rank.

“I’m going to say she’s a veteran, too,” he said. “She’s been my support through all five deployments, in Iraq, twice in the Horn of Africa, and now twice in Afghanistan.”

And for his son, before he watched him trek in his footsteps and head off to war, he had these simple words of advice: “Keep your guards up, and go with your instinct. Don’t doubt your leadership, and don’t doubt your enemies. This is not over until you step foot back on Guam, not until you’re home.”

The Flores family, and the rest of Task Force Guam, is set to redeploy back to Guam in mid-December, swapping the bitter Afghan winter for the cool tropical climate on the island they call home.