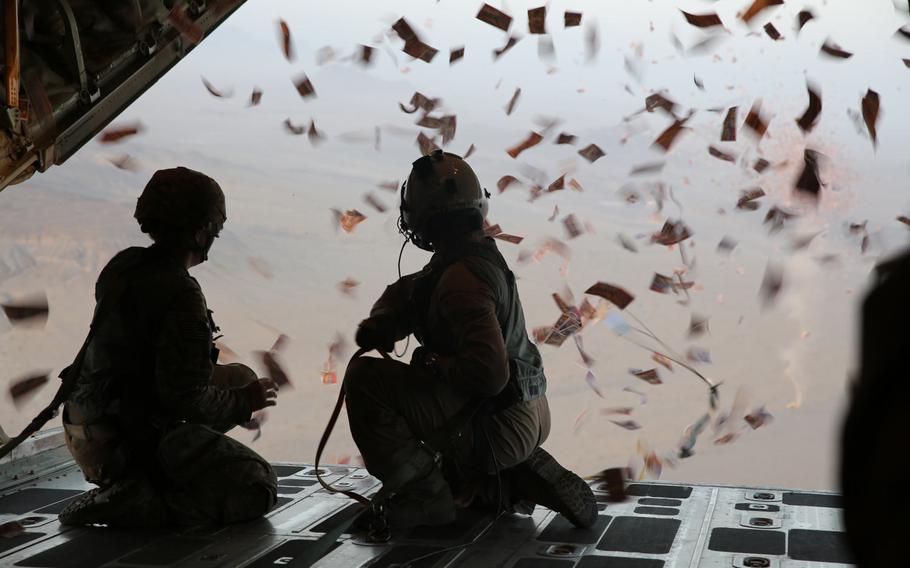 KABUL, Afghanistan — The U.S. military broke an agreement with Afghanistan’s Defense Ministry when it released propaganda flyers deemed offensive to Muslims without first getting clearance from Afghan defense officials, a spokesman said Thursday.

The incident sparked fears that a new wave of anti-American sentiment could sweep over Afghanistan just as Washington prepares to deploy thousands of additional troops to the country.

The leaflets dropped by aircraft on Tuesday in Parwan province, north of Kabul, included an image of a white dog about to be eaten by a lion. The Taliban’s banner — containing the Islamic statement of faith, “There is no God but Allah, and Muhammad is the messenger of Allah” — was written on the side of the dog. The animal is considered impure in Islam.

“They have not coordinated this with us,” Defense Ministry spokesman Gen. Dawlat Waziri said. “We are against it, that they published propaganda messages without our permission.”

“We have an agreement that whenever (NATO) publishes messages or prepares billboards they should first show it to us, they should get our permission,” Waziri added.

Immediate condemnation of the incident by government officials appears to have kept residents in Parwan from taking to the streets to protest so far, said Wahida Shahkar, the provincial governor’s spokeswoman. But Afghan authorities, U.S. military officials and local residents have all expressed concern about possible protests and violence erupting on Friday, when large groups of people meet for prayers across the country.

“This is a very serious issue,” said Shahkar. “Insulting our sacred religion is intolerable; it is natural when such mistakes take place that the people will change their mind and oppose foreign soldiers.”

Afghanistan is deeply religious, and blasphemy has sparked riots in the past.

The U.S. military in Afghanistan did not immediately answer questions about who designed the flyer or if any Afghan cultural advisers saw it before it was distributed.

The military’s apology on Wednesday came just hours before The Washington Post reported that 3,500 more American troops would be sent to Afghanistan as part of President Donald Trump’s new strategy for the country, a figure broadly in line with expectations.

It also coincided with a spate of civilian casualties blamed on U.S. airstrikes, which analysts said could further fuel anti-American sentiment and make the troops’ arrival less than welcome by some Afghans.

Winterbotham said that different actors in the Afghan conflict would likely seek to manipulate and politicize the incident with the offensive flyers.

Less than a day after the flyer drop, a Taliban suicide bomber claiming revenge blew himself up outside an entrance to Bagram Air Field. Afghan officials said a translator working for U.S. forces was killed and nine people were wounded, including three American soldiers. The U.S. military was not able to immediately confirm that report.

“We will widen our attack on foreign soldiers following this insulting incident,” Taliban spokesman Zabihullah Mujahid said. “The U.S. soldiers and their bases are going to be under serious attack in the near future.”

Many analysts and onlookers have expressed shock that the U.S. military could distribute such a culturally insensitive flyer after 16 years of engagement in Afghanistan.

Anthony H. Cordesman, of the Center for Strategic and International Studies in Washington, said the U.S. government often tells itself it is succeeding in strategic communication, even when discussion with Afghans indicates growing doubts.

Continuing to send uncertain and conflicting messages “can offset a lot of military progress and sacrifice,” Cordesman said.

Jason Dempsey, an adjunct senior fellow at the Washington-based Center for a New American Security, said the mistake should not be surprising considering the short rotations of U.S. servicemembers in Afghanistan, which are rarely longer than a year.

Fazal Muzhary contributed to this report.