Afghan corruption runs deep and the cost is high 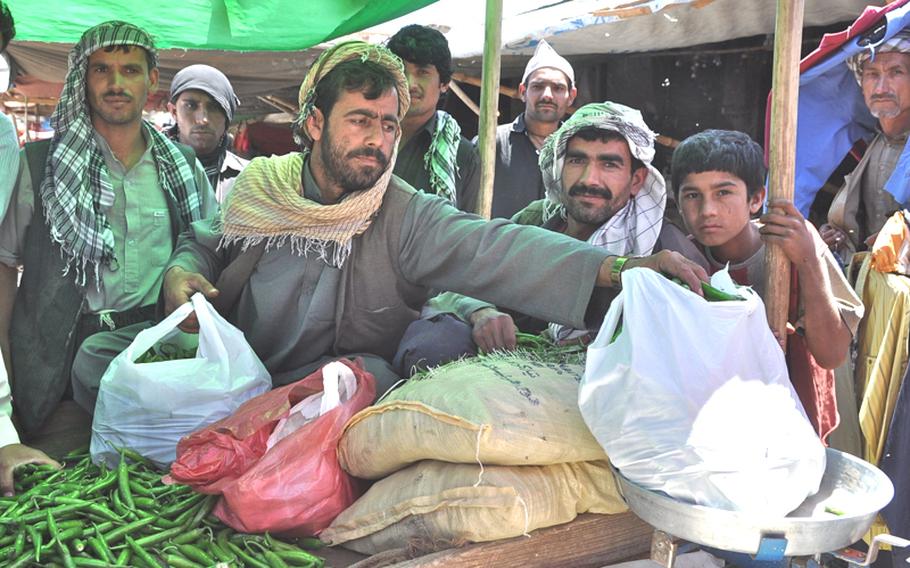 Buy Photo
A vegetable vendor weighs a bag of green peppers in the Kabul Fruit Market on June 9. Vendors complain that they must pay bribes to government officials to stay in business. (Dianna Cahn/Stars and Stripes)

Buy Photo
A vegetable vendor weighs a bag of green peppers in the Kabul Fruit Market on June 9. Vendors complain that they must pay bribes to government officials to stay in business. (Dianna Cahn/Stars and Stripes) 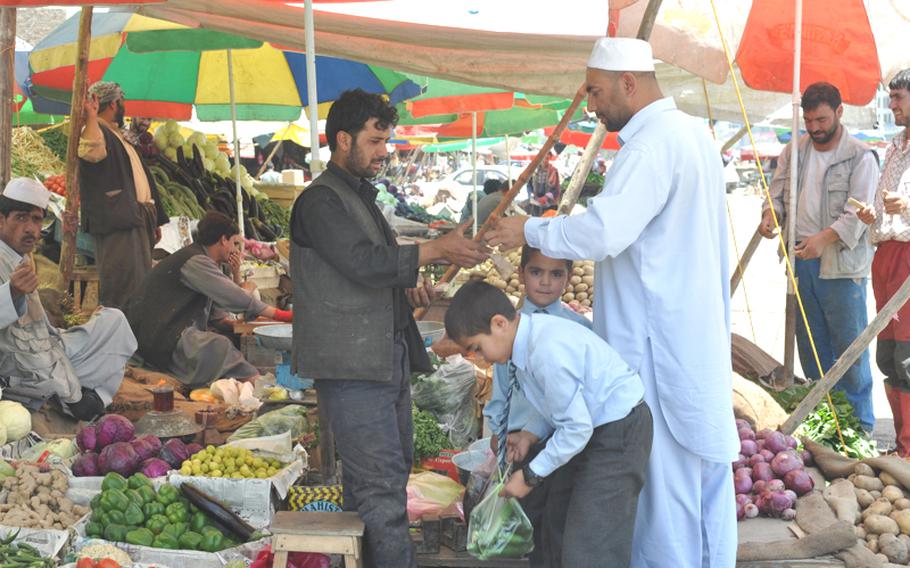 Buy Photo
A vegetable vendor makes a sale at the Kabul Fruit Market on June 9. Vendors complain that they must pay bribes to government officials to stay in business. (Dianna Cahn/Stars and Stripes) 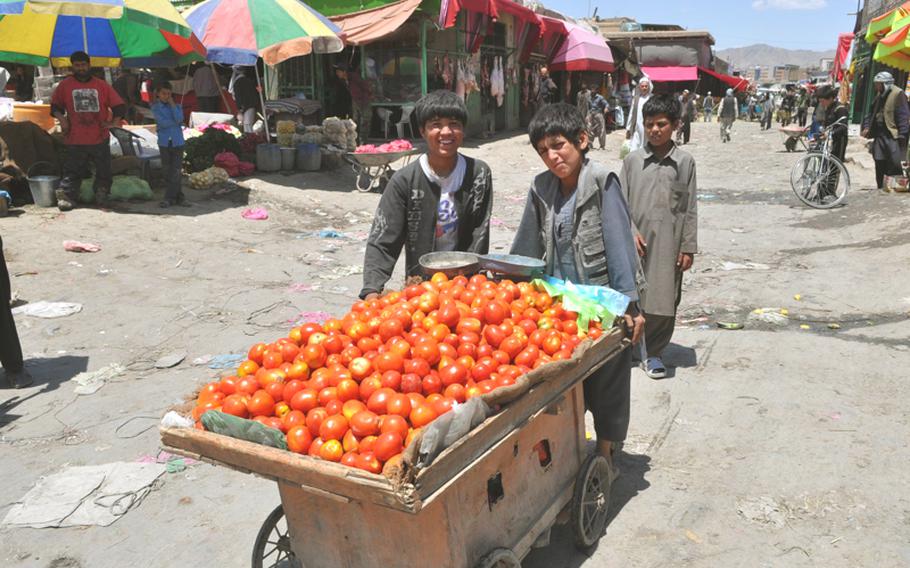 Buy Photo
Children push a cart of tomatoes in the Kabul Fruit Market on June 9. Vendors complain that they must pay bribes to government officials to stay in business. (Dianna Cahn/Stars and Stripes) 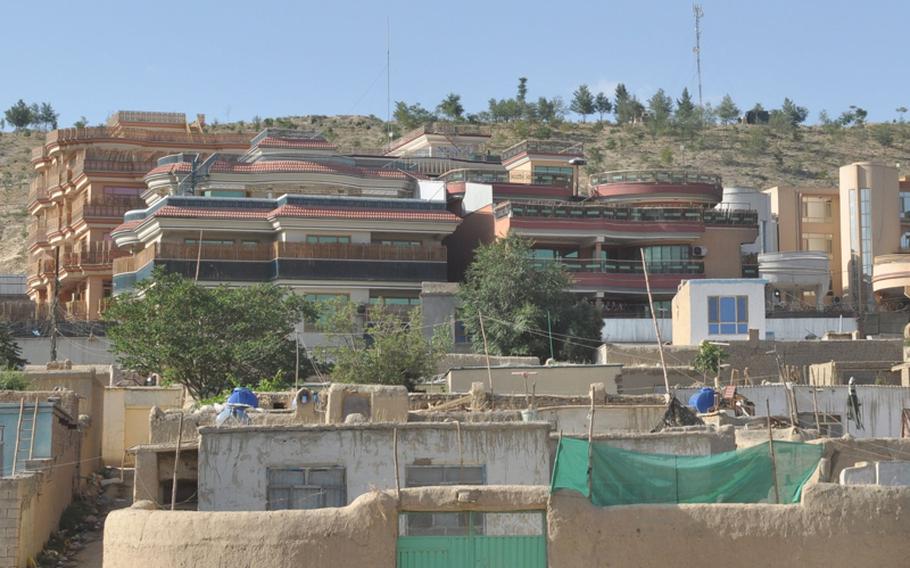 Buy Photo
Grandiose houses of rich and powerful officials and warlords loom over the mud huts of ordinary Afghans in Kabul&#39;s Sherpur neighborhood. The houses are known as "poppy palaces" because many were built on profits from the opium trade. (Dianna Cahn/Stars and Stripes) 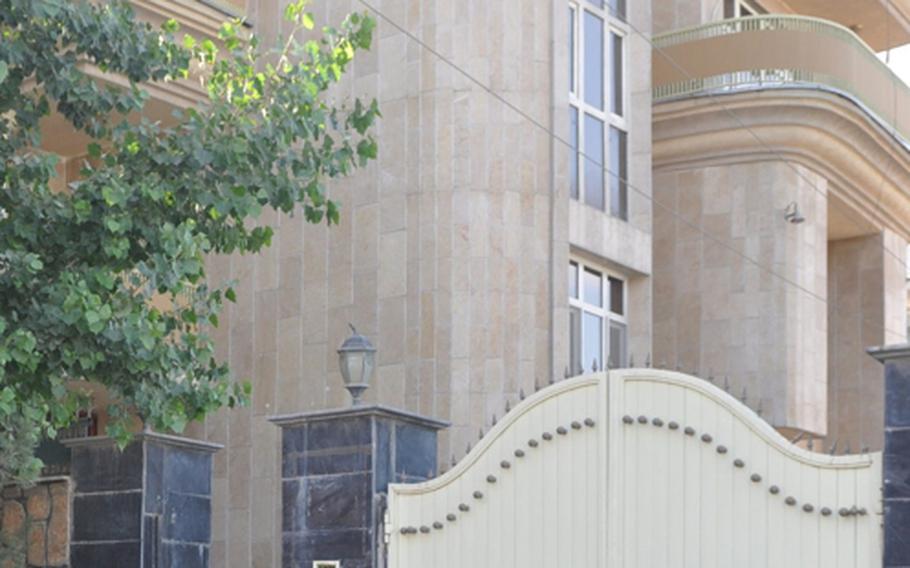 Buy Photo
Guards sit watch outside a mansion in Kabul&#39;s Sherpur neighborhood on June 9. The Sherpur mansions are known as "poppy palaces" because many were built on profits from the opium trade. (Dianna Cahn/Stars and Stripes) 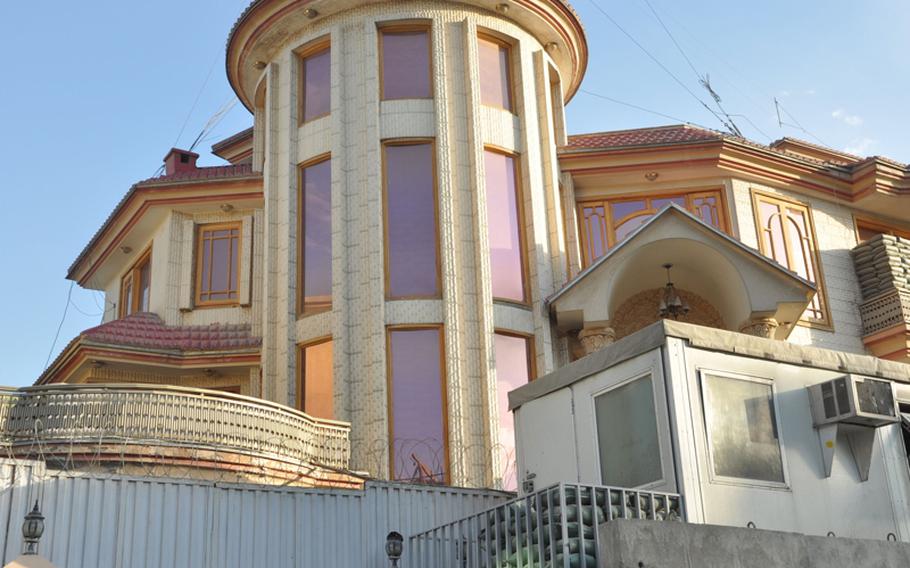 Buy Photo
A grandiose mansion looms over a street in Kabul&#39;s Sherpur neighborhood, where the gaudy homes are known as "poppy palaces" because many were built on profits from the opium trade. (Dianna Cahn/Stars and Stripes)

A few miles away, real estate agents say they can&rsquo;t even make a living selling the gaudy mansions of Afghanistan&rsquo;s elite because powerful homeowners stiff them on their fees, seeing themselves as above the law.

At the United Nations Office on Drugs and Crime, experts are working to train a new generation of Afghan prosecutors to tackle corruption. But they, like the government&rsquo;s own anti-corruption agency, are struggling to overcome constant meddling from powerful officials.

From the highest levels of Afghan government to the dirt-poor streets of the capital, corruption is so consuming it undermines the entire international effort to help build a working Afghan government and gain the trust of its people.

&ldquo;This country does not want people to live peacefully,&rdquo; said Najibulla Akabari, 27, who left Afghanistan as a teenager and recently returned.

What he found in his homeland has made him want to leave again.

&ldquo;In Afghanistan, you have to pay step by step, wherever you go, you have to pay,&rdquo; said the real estate broker. &ldquo;It&rsquo;s a shame for us to say our country is not good. But I don&rsquo;t like the people here. Here if you are rich, you have no rules.&rdquo;

Warlordism and organized criminal deals for Afghanistan&rsquo;s billion-dollar drug trade pose a dangerous backdrop. So do backroom deals to get some of the billions in aid meant to stabilize Afghanistan. The scourge has penetrated top levels of government and filtered down to the once-stabilizing tribal structure of the country&rsquo;s outlying provinces. Justice is often seen as an item up for auction and police chiefs as local power brokers.

As the U.S. military under Gen. Stanley McChrystal seeks to win over a dubious Afghan public, corruption is spreading like a sinkhole.

&ldquo;The impact of corruption on the process of nation-building is so huge that it has undermined development efforts of the past eight years,&rdquo; said Qaseem Ludin, deputy director general of the fledgling High Office for Oversight and Anti-Corruption.

&ldquo;The insurgency has been fueled by a lack of governance. It&rsquo;s very common these days to hear that regular people join the insurgency because they are fed up with the government&rsquo;s [lack of] programs and services. ... If someone in a province does not receive timely or just justice, that person will take retaliatory action. One easy way is to turn their back on the government and join the Taliban.&rdquo;

Afghans cite corruption among their top three concerns, along with security and poverty, according to reports by the U.N. and other agencies. Transparency International ranks Afghanistan the second most corrupt country in the world, following Somalia, which has lacked a stable government for the better part of 20 years.

The UNODC reports that one in two Afghans had to pay a kickback to a public official in 2009. Integrity Watch Afghanistan found that they spent between $700 million and $1 billion on bribes in 2009, up from $400 million to $600 million in 2006. UNODC estimated the 2009 figure at $2.5 billion, a quarter of the country&rsquo;s gross domestic product and surpassed only by the $2.8 billion opium trade.

Dubbed &ldquo;poppy palaces,&rdquo; the mansions are widely believed to be built on the proceeds of opium trafficking. Most are owned by the country&rsquo;s power brokers &mdash; many of them government officials &mdash; and are inhabited largely by foreigners. They&rsquo;ll pay as much as $25,000 per month for rent in a country that, according to the U.N., has GDP per capita of $425. (By comparison, the U.S. figure is more than $46,300.)

&ldquo;The powerful people don&rsquo;t give us what is rightfully ours,&rdquo; said one agent, Kadir, who like many Afghans uses only one name. &ldquo;They just say &lsquo;No, what are you going to do about it?&rsquo; &rdquo;

Kadir and his brother, who is a partner, work as taxi drivers at night because they can&rsquo;t make ends meet.

&ldquo;What other options do we have?&rdquo; he asked. &ldquo;If you know a neighborhood with honest people, tell me about it. I can tell you in Afghanistan, there are no honest people.&rdquo;

President Hamid Karzai, whose presidency was tainted by last year&rsquo;s election fraud, has pushed back with alarming brinkmanship against the international calls to combat corruption. He&rsquo;s threatened to join the Taliban and made moves to strengthen his ties with Pakistan; last week, two of his top security officials resigned over irreconcilable differences with Karzai.

Both men, the interior minister and the director of the National Security Directorate, the terrorism intelligence agency, were regarded by U.S. officials as especially competent, and the ministers&rsquo; outspoken criticism of government corruption was long said to be a key issue of contention.

Karzai recently gave the High Office of Oversight and Anti-Corruption some muscle by granting it authority to investigate and prosecute cases.

But the agency&rsquo;s director, Yusuf Osmani, is a presidential appointee who answers to Karzai himself. High-level interference is frequent.

Ludin acknowledged that as his office struggles to gain footing, it cannot tackle the highest targets.

&ldquo;There are so many levels of power, warlords also, that this office [must] move forward cautiously,&rdquo; he said.

Mohammed Mobasher, a lawyer who is mentoring Afghan prosecutors for UNODC, said the prosecutors complain of interference from high-ranking officials with their own agendas.

&ldquo;They say they don&rsquo;t have independence,&rdquo; Mobasher said. &ldquo;Whether from inside their office or externally, there is always intervention and if they don&rsquo;t follow along, they will be fired.&rdquo;

Another effort is the Major Crimes Task Force, an FBI-led initiative to help create an Afghan investigative body to tackle organized crime, corruption and kidnappings. The task force, launched in January, is the first joint body of officers from both the NDS and the interior ministry.

FBI agents mentor unskilled officers to investigate these crimes. They are also recruiting prosecutors and judges, recognizing that an entire system needs to be built.

The agency has won conviction in one case of a border patrol general who was trafficking narcotics and collecting ghost salaries, said Jason Fickett, an FBI agent on the program. He said the task force is currently investigating more than 60 cases.

But it also faces new uncertainty with the resignation of the two government officials whose agencies make up this anti-corruption body.

At the Kabul Fruit Market last week, yogurt seller Mohammed Nasser said that because of bribes he sometimes goes home with less in his pocket than when he started the day.

&ldquo;I graduated high school,&rdquo; said the father of five who is in debt trying to keep his children in private school since he said they weren&rsquo;t learning anything in the public school system. &ldquo;I served in the military. Still, I am doing the same things as people who are not even literate.&rdquo;

&ldquo;But I don&rsquo;t think they are taking it to the government,&rdquo; he said. &ldquo;They just write it down and throw away the receipt later.&rdquo;

Standing amid the shopkeepers and hungry day laborers was a vendor named Mahmoud.

&ldquo;Have you seen the Sherpur palaces?&rdquo; he asked. &ldquo;Those people weren&rsquo;t always rich. But they made money off of us, so now we own a piece of those buildings too.&rdquo;

The other shopkeepers laughed.