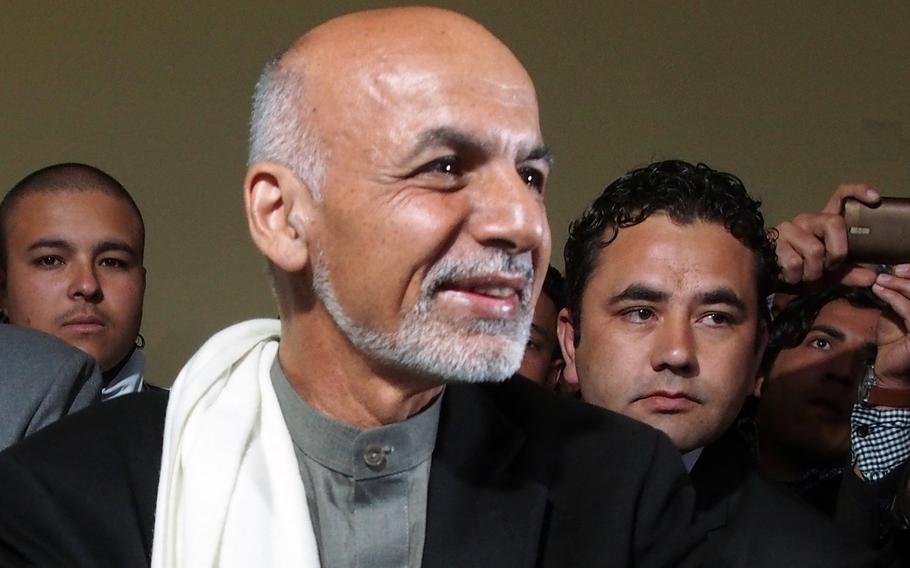 Buy Photo
Afghan President Ashraf Ghani, seen here in a 2014 file photo, convened an Afghan council, known as the Loya Jirga, to hammer out a shared strategy for future negotiations with the Taliban. (Stars and Stripes)

KABUL, Afghanistan — A convention of regional Afghan leaders adopted a road-map on Friday for peace talks with the Taliban that includes a call for the withdrawal of foreign troops and a cease-fire during the holy month of Ramadan.

The traditional gathering of elders — known as Loya Jirga — began Monday with more than 3,200 politicians, tribal heads and prominent members of society to hammer out a shared strategy for future negotiations with the Taliban.

The five-day talks resulted in a 23-point list meant to express what the Afghan people want out of any talks with the insurgents. The body’s decisions are not legally binding but carry great political significance.

The convention’s demands include calls for the Afghan government to create a timeline for the “responsible withdrawal” of foreign forces from the country.

The U.S. currently has about 14,000 troops deployed to Afghanistan, along with hundreds of civilian employees and 12,000 civilian contractors, in addition to about 8,500 allied forces. Reports in December that the White House had signaled for half of the U.S. forces to be withdrawn in a matter of months had raised concerns among some Afghans and allies of a too-rapid drawdown.

The Afghan delegates also called on the Taliban to end violence and agree to a ceasefire during the Islamic holy month of Ramadan. In turn, the movement’s legitimate demands should be recognized by the Afghan government, the resolution said.

The Taliban have so far shut the Afghan government out of its peace negotiations with U.S. diplomats, which began a new round — the sixth — on Wednesday in Doha, Qatar.

Washington has long sought to establish “intra-Afghan” dialogue between the Taliban and Kabul, saying it is key con-dition of any peace settlement. A recent attempt at such an exchange in mid-April however fell apart due to a dis-pute about how many delegates from Kabul should attend a planned meeting in Qatar.

President Ashraf Ghani convened the Loya Jirga and sought to project a unified stance on peace talks. Several prominent politicians boycotted the gathering, however, including Ghani’s partner in the government, Chief Execu-tive Abdullah Abdullah, exposing continuing rifts within the administration.

Ghani, in a speech concluding the council, promised to free 175 Taliban prisoners ahead of Ramadan as a goodwill gesture.

“This consultative Loya Jirga is very important for peace-building in Afghanistan,” said Attaullah Afghan, a participant in the council from Helmand province, in a phone interview.

The delegates wanted to give the government suggestions on any peace talks with the Taliban and also show that the whole country supports peace talks to end the 18-year war, Afghan said.