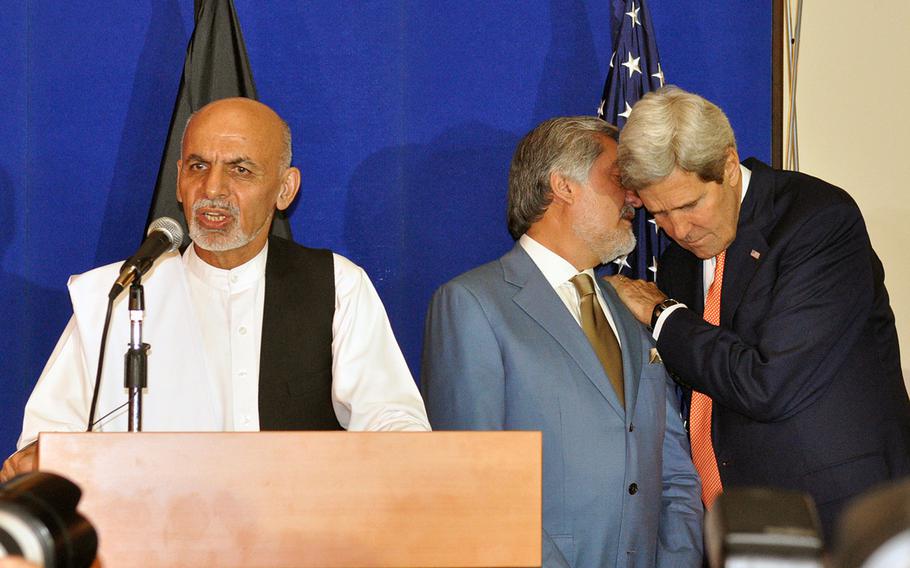 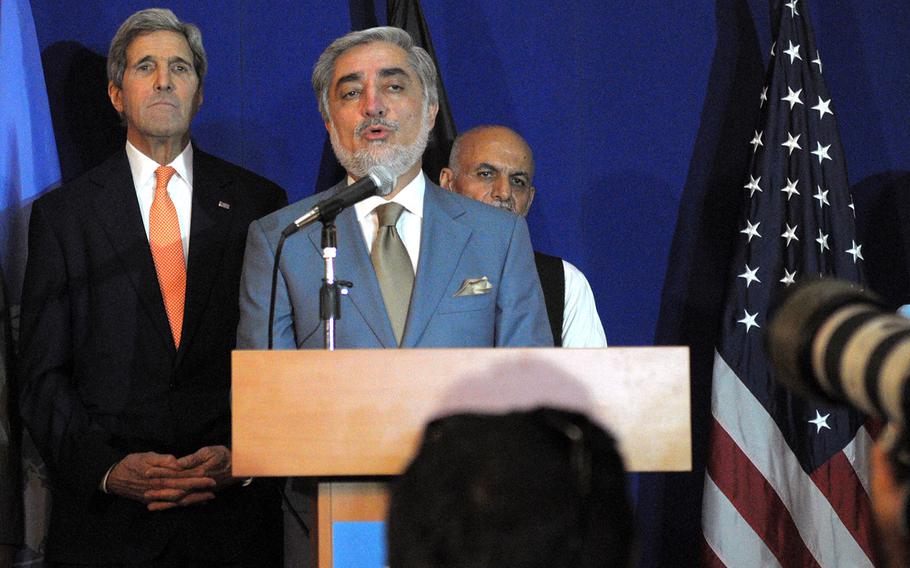 Afghan presidential candidate Abdullah Abdullah speaks at a news conference on Friday, Aug. 8, 2014, in Kabul. He and rival candidate Ashraf Ghani, right, announced their intention to stop discussing the terms of an election recount and work toward a power-sharing agreement signed during an unannounced visit by Secretary of State John Kerry, left. (Steven Beardsley/Stars and Stripes)

KABUL, Afghanistan — The two contenders for Afghanistan’s presidency promised Friday to stop feuding over an election recount and begin defining a power-sharing agreement, although their pledge avoided describing how such a novel political arrangement would work.

In an appearance that resembled one held three weeks ago when Secretary of State John Kerry brokered the deal to end a standoff over the disputed presidential runoff vote, Ashraf Ghani and Abdullah Abdullah appeared side by side again with Kerry to vow they would implement the same deal.

This time, both said they had signed an agreement to end arguing over the terms of the recount, to push for its speedy resolution and to accept its results. They also said they would immediately begin working together to define a new political structure, which would create a “chief executive” position to be filled by the losing candidate.

Kerry said the new agreement answered lingering questions from the original deal, clarifying the criteria used in the recount and the terminology in the power-sharing agreement.

“Those have now been worked through,” Kerry said. “Both of them. And that’s what brings everybody back here with greater clarity about the steps that we’ve taken.”

Protests from the Abdullah camp last week over the technical details of the recount nearly derailed the effort before tallying resumed Monday.

“From now on we are not going to discuss the election,” Ghani said. “Our discussion will be on the interests of Afghanistan — peace, security, stability and the interests of the Afghan people.”

Under the agreement, the candidates will push for the recount to be finished by the end of August, just before a September summit of NATO countries. Yet they declined to set an inauguration date, believing it would distract from the recount, Ghani said.

The signed statement, a copy of which was not immediately available, also avoids enumerating the powers of the chief executive and does not set a deadline for doing so, despite the fact the candidates will be on different political footings once a winner is declared.

Ghani, who finished ahead of Abdullah in June’s runoff by roughly a million votes, has said that he wants to wait until after the recount is finished to define the position. Abdullah has pushed for a faster resolution.

All three men emphasized the new political structure was permissible under Afghanistan’s constitution, and Kerry said it wouldn’t create a parliamentary system or diminish the powers of the president. He said it would work toward reforming sectors of Afghanistan society, although he didn’t offer details on how. The position would answer to the president but could be confirmed and replaced only by the Loya Jirga, an assembly of tribal leaders from across the country.

How the recount will be finished by month’s end remains unclear. Conducted by Afghanistan’s Independent Election Commission and overseen by the United Nations with the aid of independent election observers, the recount is the biggest and most complex in U.N. history.

As of Thursday evening, about 18,000 ballot boxes remained to be checked, or roughly 82 percent of the total. Counters completed 720 boxes on Thursday, the largest single-day count yet, a rate that would have to be exceeded to meet the agreement time line. Kerry asked on Friday for more election observers to join the effort.

The two candidates offered their condolences to the family of Army Maj. Gen. Harold J. Greene, who was killed Tuesday when an Afghan inside a training base near Kabul opened fire. More than a dozen NATO troops were also wounded in the attack.

Kerry’s visit underlines the urgency with which the U.S. views a resolution to the election and a peaceful transition of power in the country, which is fighting an entrenched insurgency and a rock-bottom economy that only grows worse amid perceptions of government instability.

Both candidates appeared to understand how closely their cooperation is being watched, each offering repeated reassurances about their ability to work together.

Ghani said he and Abdullah, both former ministers under the Hamid Karzai government, were so in sync Friday while speaking with Kerry that they “finished each other’s sentences.”

Whether such amity will survive the results of an election both want to win remains to be seen. In an awkward moment late in the news conference, Kerry responded to a reporter’s question by saying he’d “leave the answer to the next president of Afghanistan.”

Abdullah and Ghani looked at each other and hesitated before Kerry realized his flub.