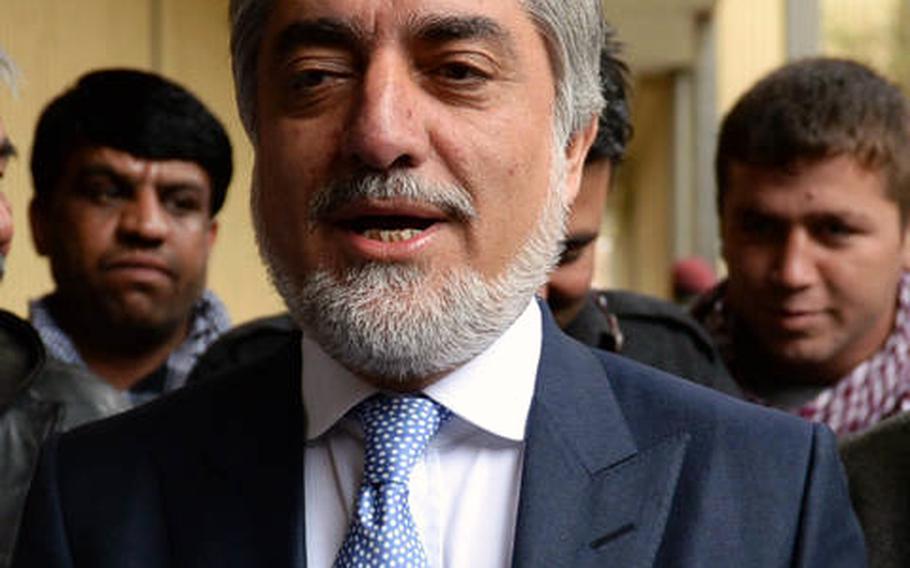 KABUL — Claiming massive fraud in last week’s runoff election, one of Afghanistan’s two remaining presidential candidates on Wednesday called for an immediate halt to vote counting, a move that would throw the future of the U.S. presence in Afghanistan into doubt.

Any delay in the election of a new president is likely to affect the Bilateral Security Agreement to keep American troops in Afghanistan past 2014.

Afghan President Hamid Karzai has refused to sign the deal, saying the decision is up to his successor.

The lack of a BSA has frustrated the U.S. military and the White House. As Karzai delayed, President Barack Obama in February ordered the Defense Department to begin planning for a full U.S. troop withdrawal from Afghanistan.

Abdullah’s decision and escalating rhetoric also could throw the election process itself into doubt. Afghan leaders and international observers see the election as a major test of legitimacy for the Afghan government, which is facing the withdrawal of foreign military combat forces by the end of the year.

Abdullah faced former Finance Minister Ashraf Ghani in a runoff on June 14 after neither candidate got the more than 50 percent of votes needed in the first round of voting in April. Abdullah was ahead after the first round with about 45 percent.

In this second round, Abdullah and his supporters claim that the turnout was exaggerated and in some places the number of votes reported exceeded the population.

“Widespread fraud forced us to make this decision, and this decision is in the interest of the nation of Afghanistan,” Abdullah said.

He said he raised concerns about fraud from the first round with the Independent Election Commission and with Karzai, but those concerns went unaddressed.

The commission will respond to Abdullah’s complaints when it officially receives them, said IEC spokesman Noor Mohammad Noor, but meanwhile the process will go forward.

Abdullah ran against Karzai in 2009 but pulled out before a runoff could take place, citing rampant vote rigging.

Nadir Muhsini, a spokesman for the Electoral Complaints Commission, which is tasked with investigating claims of fraud, said it was too early to reach any conclusions.

“We just started our work because we are just receiving the complaints,” he told Stripes. “So these comments by Dr. Abdullah are very premature and it is not fair. Definitely, such comments and taking such stances are not good for the future of Afghanistan.” Muhsini promised that all complaints would be addressed in a just way.

A spokeswoman for Karzai declined to comment until she had further information.

“We consider the stoppage of vote-counting and withdrawal of observers as disrespect to people’s votes,” the Ghani campaign said via Twitter. “People have come out in masses on June 14, they have voted. Therefore, the IEC must complete all its election proceedings.”

Abdullah won the most votes in the April 5 election, but may have seen the vote count turning against him this time, said Ghafoor Liwal, a political analyst who heads the Afghan Regional Study Center.

“I think [Abdullah] wants to kind of sabotage the process,” Liwal said. “I am confident the IEC will continue the counting of votes, but this will harm the legitimacy of the process, and the results will be less legitimate. He needs to be patient until the commission has announced the results.”

This was a way for Abdullah to force his concerns into the public arena, said Kate Clark, a senior analyst with the Afghan Analyst Network. “In part, this is Abdullah saying, ‘You will listen to me,’” she said. “But it’s a nuclear option because it is absolutely dangerous to the legitimacy of the next president, regardless of who comes out on top, because it hits at the process itself.”

Abdullah’s 2009 decision not to take the race to a second round is likely also hanging over his actions now. In 2009, the first round had been exceptionally fraudulent, but he gave in to domestic and international pressure to drop out.

“He believed he was defeated by mass fraud and political pressure,” Clark said. “He also learned that you gain nothing, in those circumstances, from being a good loser.”

Stars and Stripes reporter Heath Druzin and Zubair Babakarkhail contributed to this report.