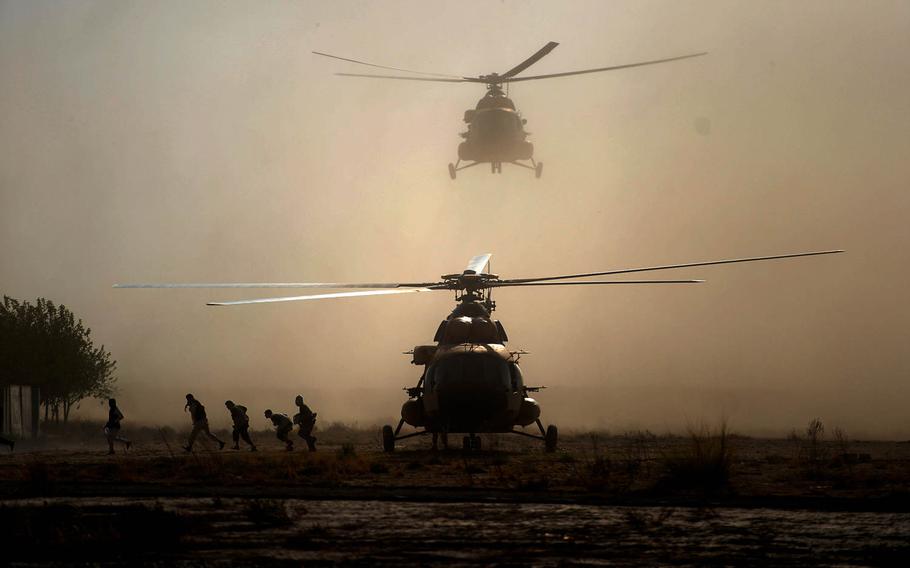 Men run from an Afghan air force Mi-17 helicopter as it lands at a military base outside of Kunduz city, Oct. 7, 2015. Aircraft played a major role in shuttling reinforcements and supplies after Taliban forces seized the city and blocked roads. (Josh Smith/Stars and Stripes)

Men run from an Afghan air force Mi-17 helicopter as it lands at a military base outside of Kunduz city, Oct. 7, 2015. Aircraft played a major role in shuttling reinforcements and supplies after Taliban forces seized the city and blocked roads. (Josh Smith/Stars and Stripes) 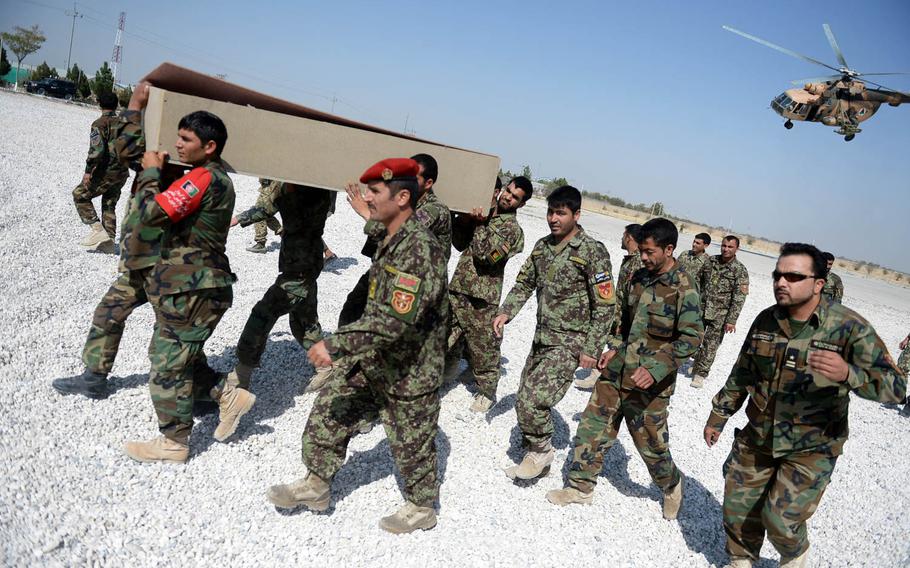 Afghan soldiers carry the coffin of a comrade, which was dropped off by helicopter at a base in Mazar-e-Sharif on Oct. 6, 2015. Helicopters shuttled supplies and casualties to and from battlefields across northern Afghanistan. (Josh Smith/Stars and Stripes) 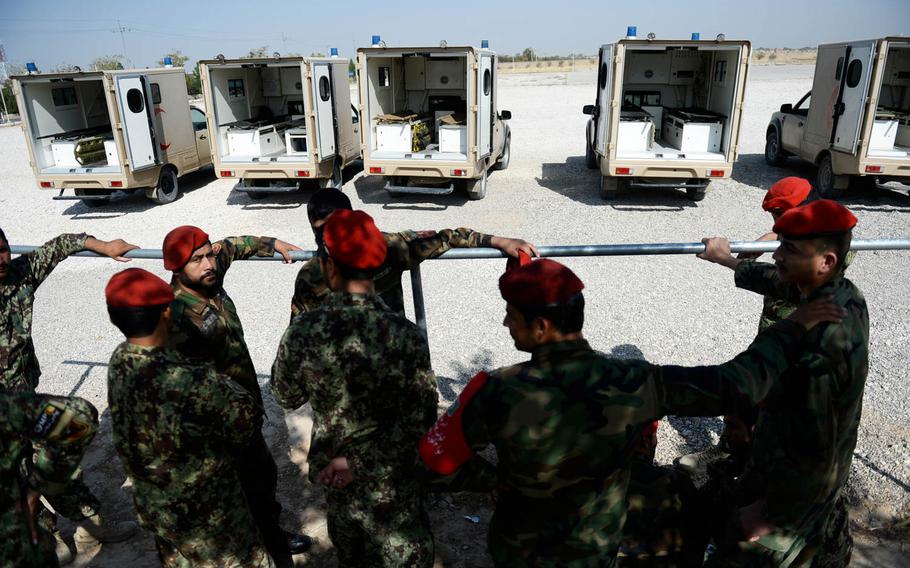 Army ambulance crews wait by their vehicles at a helicopter landing zone at a base in Mazar-e-Sharif, Afghanistan on Oct. 6, 2015. The vehicles were used to carry both wounded soldiers and coffins, and all would be filled in a matter of hours. (Josh Smith/Stars and Stripes) 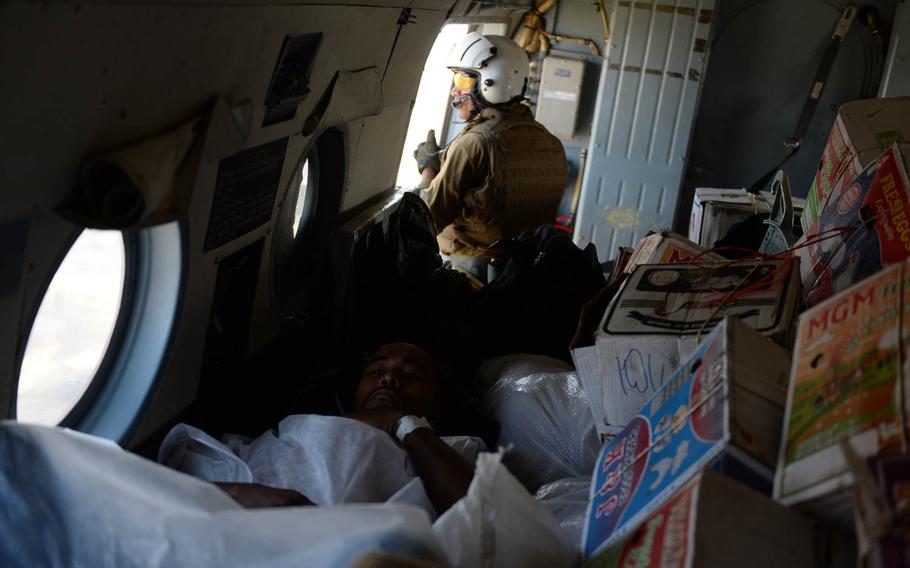 An injured soldier lies in an Afghan air force Mi-17 helicopter along with a load of apples and two coffins, Oct. 7, 2015. The apples would be dropped off at a garrison in Kunduz, while the wounded and dead soldiers were to be flown on to Kabul. (Josh Smith/Stars and Stripes) 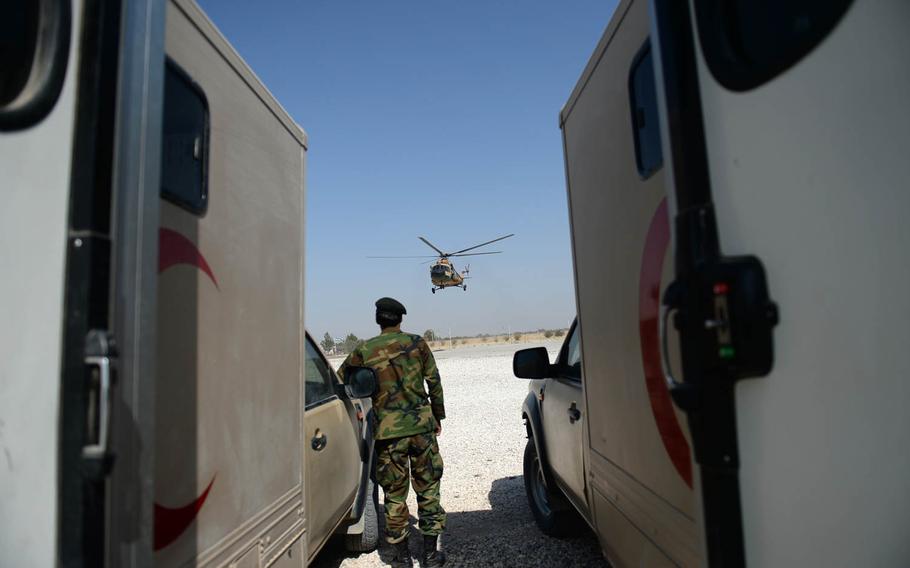 An army ambulance driver watches an Afghan air force helicopter land at a base in Mazsar-e-Sharif on Oct. 6, 2015. The ambulances were used to carry away injured and dead soldiers brought by the aircraft. (Josh Smith/Stars and Stripes)

KUNDUZ, Afghanistan — First, the helicopter’s crew loaded two pressboard coffins, tagged with the names of the dead. Then came two injured soldiers on stretchers. After that, hundreds of pounds of apples. Finally two news correspondents and their interpreter squeezed into the back.

An hour after taking off from the northern city of Mazar-e-Sharif, the Soviet-designed Mi-17 helicopter touched down in a swirl of dust at a military base just outside the beleaguered city of Kunduz.

As the Taliban continue to threaten cities in several provinces, the fledgling Afghan air force is being called on more than ever to deliver supplies, move troops and perform other tasks vital if the Afghan security forces are to hold the line against the militants.

The vital role of the air force could be seen in the two-week fight to regain control of Kunduz from the Taliban, which seized the city Sept. 28 in a matter of hours.

Taliban fighters blocked the roads to Kunduz, forcing the government to turn to the air force to fly in reinforcements and supplies and evacuate casualties.

“The air force was very successful in transferring reinforcements to the city,” said Dawlat Waziri, a spokesman for the Defense Ministry. “If we could only send reinforcements by ground it would have taken many days and nights, but, by air, they were there in only a few hours.”

The accelerated pace is already taking its toll.

On Monday, a small air force plane crashed while delivering the remains of a soldier in Bamyan province, killing two pilots and injuring five passengers. On the same day, a transport helicopter made a hard landing in Logar province, injuring two crew members.

The heart of the Afghan air transport network is the fleet of 55 Mi-17 helicopters, which are also used to deliver supplies to civilians during the long winter and assist victims of landslides and other natural disasters. Not all of them are operational on a given day due to maintenance issues and lack of trained crews.

In order to maintain the logistical chain, the aircraft are in a state of near constant deployment. The helicopter that flew from Mazar landed in Kunduz to deliver apples, then continued on to Kabul to deliver casualties from other battlefields.

“We can take you, if we don’t have to carry too many bodies,” an army officer told a Stars and Stripes reporter trying to hitch a ride from Kunduz.

The pace can be intense.

Under a glaring sun on a landing zone at the Afghan army’s 209th Corps headquarters in Mazar, nearly a dozen ambulances lined up to receive wounded. One after another, helicopters in desert camouflage descended from the sky. Injured patients limped out of some. Others carried more coffins.

As soon as the helicopters were unloaded, they received new passengers, more ammunition and food and then took off for other battle zones in Faryab, Kunduz and other provinces.

In Kunduz, the landing zone was packed with as many as eight helicopters, some from the air force, others from the intelligence service. A few of the Mi-17s were retrofitted with rocket pods to provide close air support.

The air force also operates 25 Cessna C-208 fixed-wing aircraft, which are simple to operate but smaller than the helicopters, harder to operate at Afghanistan’s high altitudes, and capable of landing and taking off only from established runways. Afghan crews are still learning how to independently operate four more advanced C-130 aircraft provided by the Americans.

The Interior Ministry and the intelligence agencies field smaller numbers of aircraft of their own.

As the Taliban widen their operations across the country, pressure on the air force will only increase.

Pilots described flying from dawn to dusk nonstop at the height of the battle for Kunduz. Reports from witnesses indicated that some government flight crews were illegally trying to charge passengers hundreds of dollars to evacuate them in the early days of the Taliban offensive. This could have implications for discipline as the war intensifies.

Even as the fighting in Kunduz wound down over the weekend, some pilots with both the intelligence service and the air force asked embedded reporters for “tips” to fly them to Kabul, despite previous authorization for the transport from the Defense Ministry. “We don’t do this for free,” said one pilot.