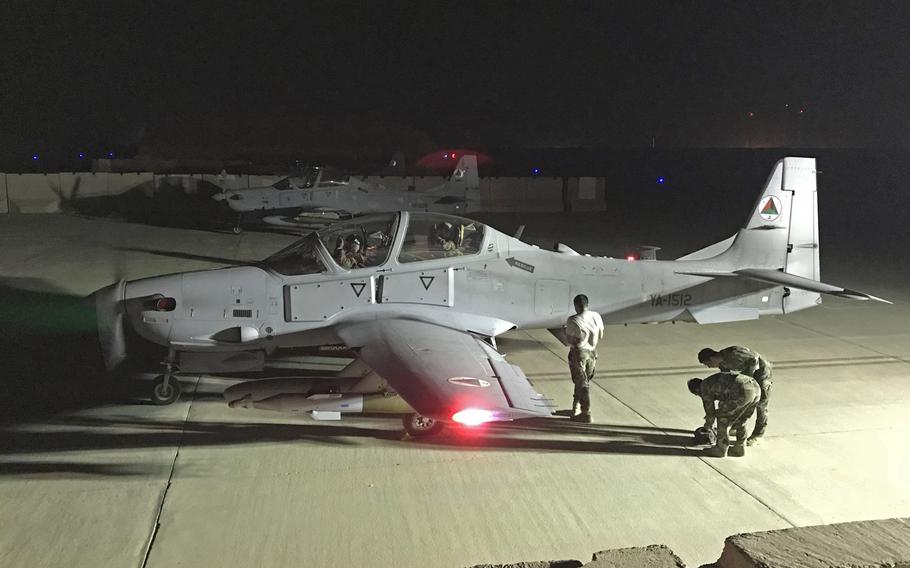 An Afghan air force A-29 is inspected after a night combat mission May 17, 2018, in Kabul, Afghanistan. The Afghan air force has conducted its first ever nighttime airstrikes after months of training by U.S. and international forces. (Jared Duhon/U.S. Forces-Afghanistan)

An Afghan air force A-29 is inspected after a night combat mission May 17, 2018, in Kabul, Afghanistan. The Afghan air force has conducted its first ever nighttime airstrikes after months of training by U.S. and international forces. (Jared Duhon/U.S. Forces-Afghanistan) 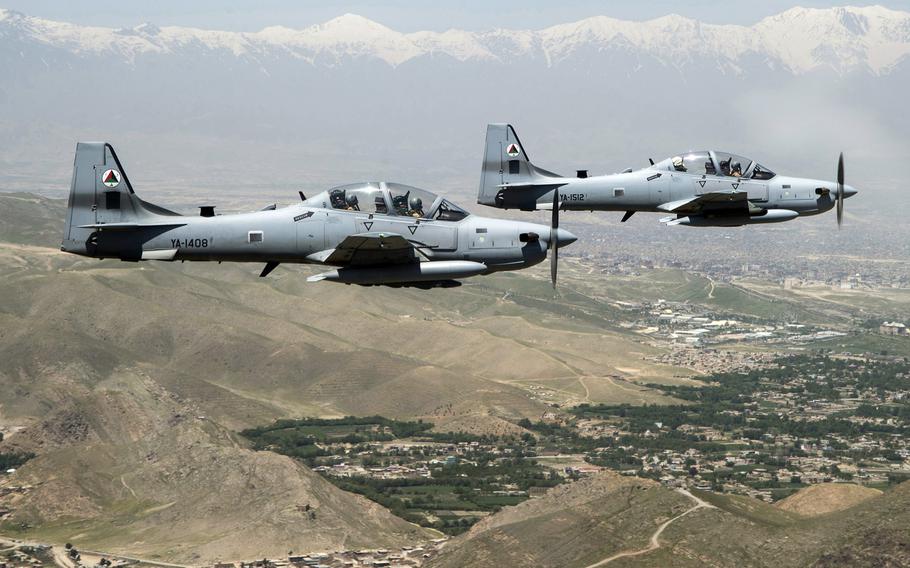 A formation of A-29 Super Tucanos fly over Kabul, Afghanistan, during a mission in 2016. The Afghan air force has recently conducted its first nighttime airstrikes after months of training by U.S. and international forces. (Larry Reid Jr./U.S. Air Force)

KABUL, Afghanistan — The Afghan air force has conducted nighttime airstrikes for the first time in a step toward making the country less dependent on American airpower, officials said Tuesday.

“This is a very important step that we have taken, and we will try to increase nighttime air operations carried out solely by Afghans in the future,” Ibrahimkhail said.

The U.S.-led coalition in Afghanistan has been training Afghans for nighttime operations on different aircraft for months. Night flights are considered safer than daytime sorties because they are more difficult for insurgents to target.

“We want to continue this. It is really important because now we have a problem supporting our ground forces, and if we improve our capabilities, casualties will decrease,” Jawed said.

That assessment came after Defense Minister Gen. Tariq Shah told parliament in September that the previous month was the deadliest ever for local forces, with over 500 soldiers killed. Shah said a major factor was that ground forces were not being backed up by air support at night.

Despite billions of dollars spent by Washington to strengthen Afghanistan’s air force, the country’s military still relies heavily on U.S. airpower. This year, U.S. forces dropped more munitions in Afghanistan than any other year in over a decade.

Efforts to boost the Afghans’ air capabilities have been going on for more than a decade. But coalition officials say it will likely take years before the service is self-sufficient.

Still, they say developments like Sunday’s prove that efforts to wean the Afghans off dependence on U.S. air power are moving in the right direction.

“We appreciate anything that makes them more effective at preventing Afghanistan from becoming a safe haven for terrorists,” NATO’s Resolute Support said.

The first Embraer/SNC A-29 Super Tucanos were delivered to the air force in February 2016. They are the first fixed-wing aircraft used by the Afghans for close air support, though the service also has more than two dozen MD-530F several Mi-35 Krokodyl helicopter gunships in its inventory.

The turboprop light attack planes carry a 12.7 mm machine gun under each wing and can be equipped with 20 mm cannons, air-to-ground rockets and precision-guided bombs.