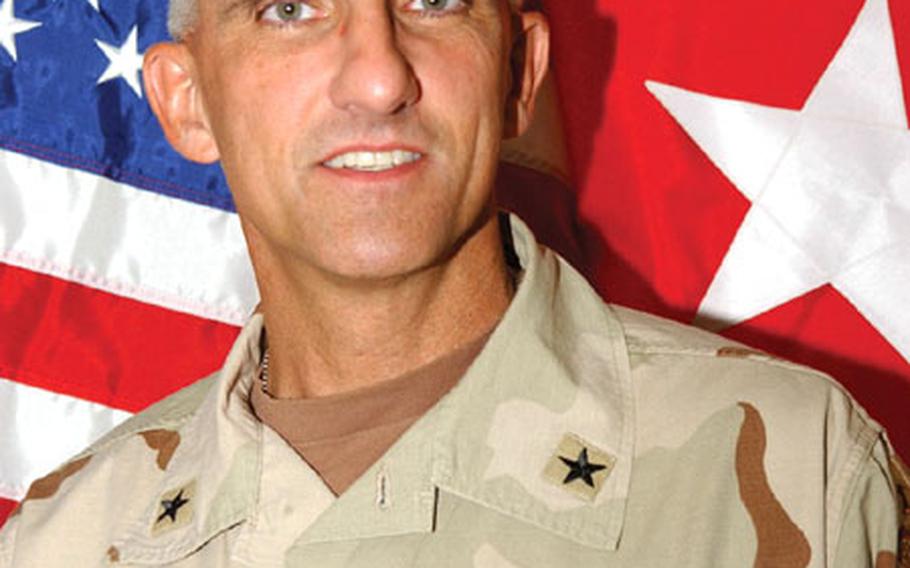 Families of 1st Armored Division soldiers got a shock this week when they learned their loved ones would be staying in Iraq for at least three more months instead of returning home.

Brig. Gen. Mark Hertling, the 1st AD&#8217;s deputy commander, flew back to Germany from Iraq to face the spouses during town meetings Friday at Hanau, Friedberg and Giessen. The meetings were closed to the press.

&#8220;We&#8217;re trying to convey that the commanders in Iraq are very interested in the welfare of the family members here in Germany,&#8221; Hertling said. &#8220;We want them to get the most up-to-date information on not only what&#8217;s happening in Iraq but also how well [the soldiers] are being supported down there.&#8221;

Hertling said in a telephone interview that the Giessen meeting was 30 minutes of briefing followed by 2&#189; hours of questions. Meetings also are scheduled for Monday in Wiesbaden and Baumholder.

The meetings were called after it was announced Thursday that soldiers of the 1st AD would stay in Iraq instead of coming home this month as expected at the end of their one-year deployment.

Department of Defense officials said the extended tours, which affect about 20,000 soldiers, were required to help stabilize U.S. military operations during a massive influx of troops who are new to Operation Iraqi Freedom.

Hertling said he felt proud addressing the family members, who had to scuttle reunion plans after the extension was announced.

&#8220;The majority understand the importance of the mission and are supporting their soldiers.&#8221;

Several wives in Baumholder said earlier this week that they&#8217;d been asked to mail baby wipes, toothpaste and other basics downrange because the soldiers were going to be living in tents.

One spouse in Hanau, who asked that her name not be used, said she felt uplifted after the morning meeting at Hanau&#8217;s Fliegerhorst gym, which she said was attended by between 300 and 400 people.

Lt. Col. Kevin Gainer, a spokesman for V Corps, 1st AD&#8217;s parent command in Germany, said some personnel issues, such as soldiers who were scheduled to change duty stations or retire, are still being worked out.