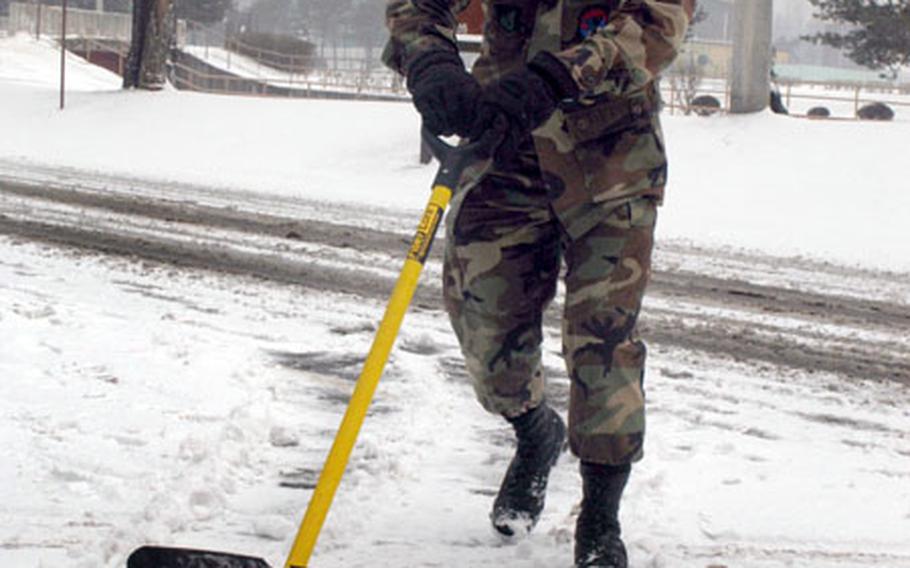 CAMP RED CLOUD, South Korea &#8212; The first significant snowfall of winter is a sign the El Nino weather pattern is affecting South Korea, something likely to bring more rain and snow over the next three years, says an Air Force weather forecaster.

Air Force Capt. Brian Schroeder, who commands the Camp Red Cloud-based Detachment 1 of the 607th Weather Squadron, said heavy snow in Area I on Tuesday was the winter&#8217;s first &#8220;significant&#8221; snowfall. Up to six inches could fall by the time the storm passed, he predicted.

&#8220;We had the right mix of cool surface temperatures (around 30 degrees) and moisture above to bring a good snowfall,&#8221; said Schroeder, who gives weather advice to the 2nd Infantry Division commander.

The snow was brought by a low-pressure system moving east from Mongolia, he said.

&#8220;It is a Mongolian low. Usually we get high pressure from Siberia (in the north) that brings the cold, but this year, the Asiatic high (to the south) has had more influence,&#8221; he said.

So far this year, only about an inch of snow has fallen in Area I, compared to an average for January, February and March of about 15 inches, said Schroeder, who monitors information collected by tactical meteorological equipment deployed by U.S. forces all over South Korea.

The heavy snow is a sign that the El Nino system, a periodic change in global weather patterns, is starting to kick in, he said.

&#8220;This is the start of a three-year cycle which will bring warmer temperatures and more rain and snow to South Korea,&#8221; Schroeder said.

The main impact of the snow was on road conditions, he said.

&#8220;It is going to limit anybody getting their daily business done and it might impact convoy operations,&#8221; he said.

Commanders dealing with snow should assess the conditions and their missions, then assess whether it is worth exposing personnel and vehicles to risk before sending soldiers out in the snow, he said.

The snow grounded 15 helicopters from 2nd Battalion, 2nd Aviation Regiment, that were to participate in an exercise, said Chase, who advises the aviation brigade on weather.