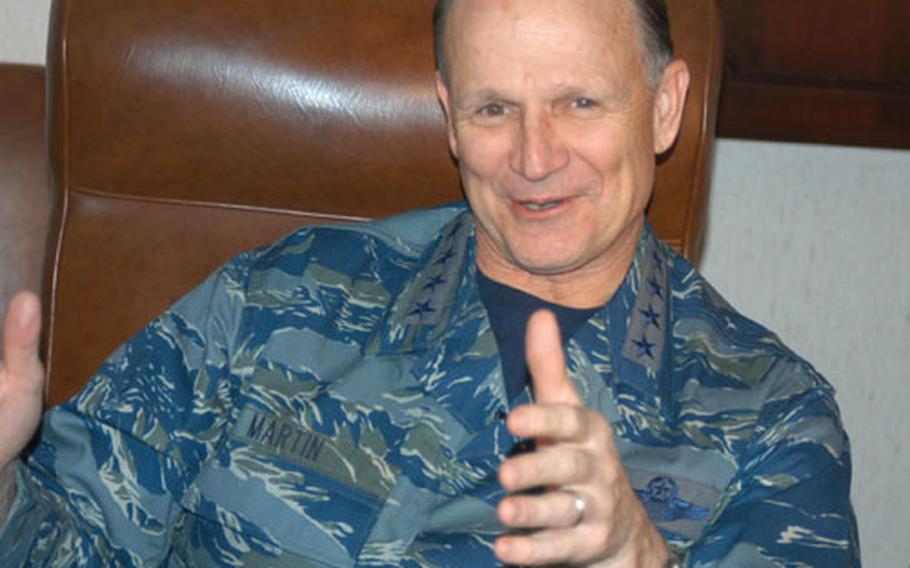 RAMSTEIN AIR BASE, Germany &#8212; Leaders from several major Air Force commands met this week in Germany to hash out how they can better serve the warfighter.

Topics ranged from getting improved battery packs for ground-pounding troops to launching better satellite networks for communications, intelligence and surveillance.

&#8220;We wanted to figure out where we&#8217;re hitting on the right cylinders and where we&#8217;re not, and trying to put attention to those areas,&#8221; said Gen. Gregory S. Martin, commander of the Air Force Materiel Command at Wright-Patterson Air Force Base, Ohio.

Martin, who headed U.S. Air Forces in Europe until about seven months ago, finds himself on the other side of the fence these days, providing all manner of equipment and supplies to operational troops.

A couple of the top items on the Air Force Materiel Command agenda, according to Martin, are:

&#8226; Improving the lag time between units ordering supplies and receiving them in the field.

&#8226; Working to develop lighter, smaller battery packs for deployed troops. At times, batteries can make up 60 pounds of a 100-pound pack. &#8220;We have to figure out a way to get them power in a way that is much more helpful and more mobile,&#8221; Martin said.

&#8226; Working out the bugs in the new computer systems upgrades on F-16 fighters, being tested for the first time on jets at Spangdahlem Air Base, Germany.

&#8226; Developing micro-spectral, or foliage-penetrating radar so troops can see threats that otherwise would be hidden.

Gen. Lance Lord, commander of the Air Force Space Command, said his command also is focusing on a number of new technologies. Among them are:

&#8226; Launching the Space University, an education and training program open to all airmen to advance understanding of how space-based systems can be used in military operations.