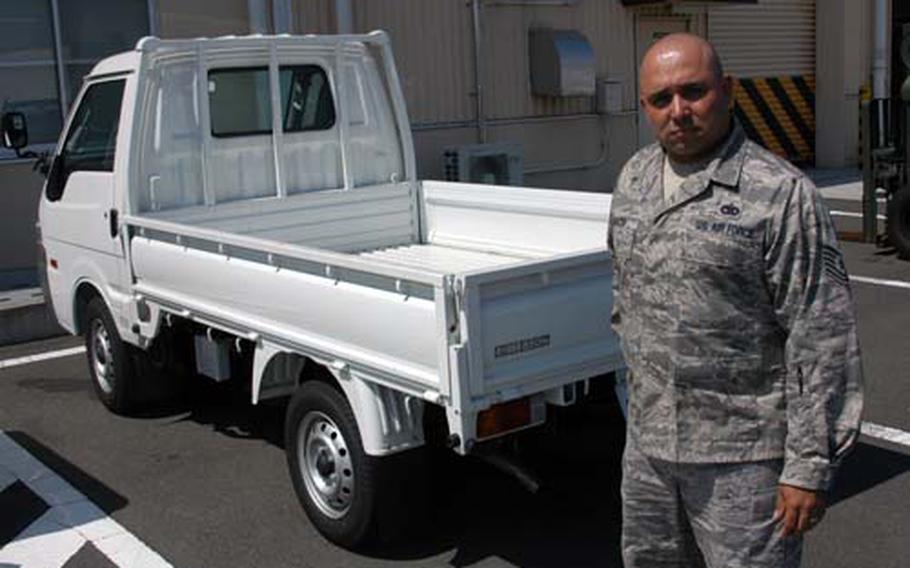 Tech. Sgt. John Garcia, the 374th Logistics Readiness Squadron’s base vehicle fleet manager, stands next to a 2008 Mazda pickup truck at Yokota Air Base, Japan. He said it resembles what the new official low-speed vehicles will look like in two years when the Air Force streamlines purchasing procedures. Vince Little/Stars and Stripes (Vince Little / S&S)

YOKOTA AIR BASE, Japan &#8212; The Air Force plans to streamline its use of official vehicles starting in fiscal year 2010 under a measure designed to increase accountability and lower fuel consumption.

The move establishes the same funding and purchasing procedures for low-speed vehicles &#8212; or LSVs &#8212; as are required now in the acquisition of larger special- and general-purpose vehicles, according to Tech. Sgt. John Garcia, the 374th Logistics Readiness Squadron&#8217;s base vehicle fleet manager.

"They used to be apples and oranges," he said. "The Air Force as a whole is trying to save money fsor use elsewhere. This is mainly being done to get back to basics on vehicle procurement and usage.

It&#8217;s unclear how much the Air Force will save overall. According to Garcia, Yokota has spent about $1.39 million on LSVs since 1991.

He said 211 LSVs are currently at Yokota. Most are trucks, vans and scooters that don&#8217;t exceed 25 mph and are restricted to base. Under the service&#8217;s new authorization plan, only 25 of the vehicles will be replaced.

Up until June 2006, Garcia said unit commanders at Yokota had the flexibility to buy LSVs locally using excess end-of-year funds. However, there was no accountability mandate, and with an average life expectancy of seven to eight years, many vehicles weren&#8217;t properly maintained and fell into disrepair before being scrapped.

In some cases, he added, units simply removed license plates or tags and put them on the newly bought LSVs.

In February, the logistics readiness squadron began overseeing the safety and serviceability inspections of all 211 LSVs, he said. The majority will be phased out through attrition over the next two years as the new vehicle ordering system takes root.

"Units can still use them until they run out," he said. "That gives wing leadership some room to breathe."

There are 891 special- or general-purpose vehicles at Yokota, Garcia said. He expects use to increase because of the change and says many shops may even start sharing the pickup trucks, sedans and vans already designated for official use.

The 25 new LSVs should arrive at Yokota in 2010, he said. They&#8217;ll be funded by Pacific Air Forces and validated every three years through the same procedure applied to larger vehicles.

Garcia says it also takes about three years to complete the authorization for any new vehicle. He worries many Air Force squadrons might put off initiating equipment requests, which could lead to a "bottleneck" of purchase orders at the Pentagon.

For instance, one Yokota squadron has 81 of the 211 LSVs in operation now, he said. But under the new setup, it will only be given six of the 25 vehicles allotted to the base.