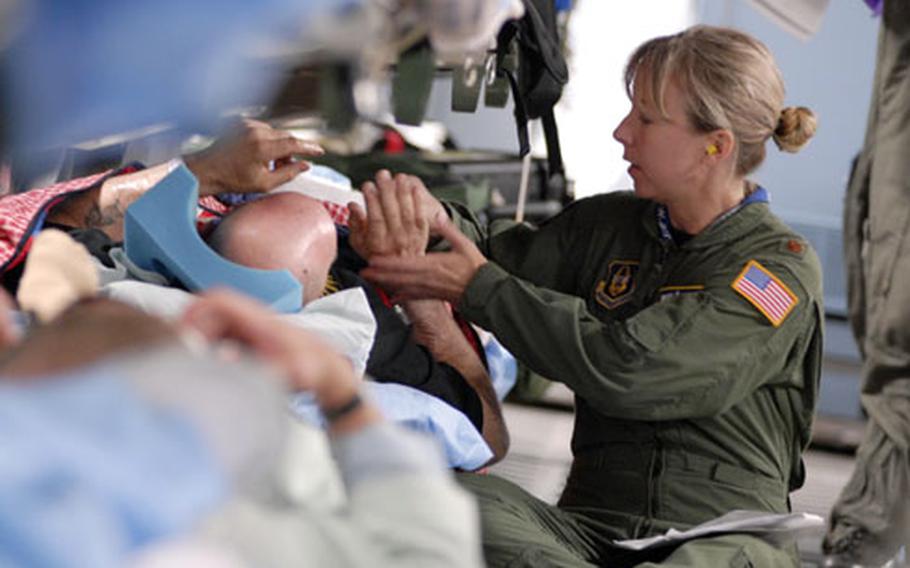 Sykes is a registered nurse as well as director of Air Force nursing services, and chief of the education and training division, in the office of the Air Force Surgeon General.

To help alleviate the shortage, the Air Force is offering enlisted airmen the chance to earn their nursing degree and become an officer in exchange for a four-year commitment as a nurse, said Col. Vickie Moore, also a registered nurse.

The nurse commissioning program hopes to select 40 candidates this fiscal year &#8212; 30 for those who need two years of schooling and 10 for those who only need one year to earn a nursing degree, said Moore, chief, nurse utilization education branch, Air Force Personnel Center.

An Air Force news release said that applicants must:

Be active duty, E-4 and above;Be a U.S. citizen;Be younger than 42 by the time they are would be commissioned;Be worldwide qualified and meet all requirements for commissioning;Have completed 59 semester hours of graded college work in general psychology; anatomy and physiology I and II (labs required); microbiology (labs required); chemistry I and II (labs required); nutrition and statistics.Applicants also must have completed College Level Examination Program coursework in these subjects, with the exception of the labs.

The Air Force&#8217;s shortfall reflects a nationwide shortage of nurses, which could reach 500,000 by 2025, according to the American Association of Colleges of Nursing. Since the program received funding in 2007, it has accepted 73 candidates. Three of those candidates have graduated so far, Moore said.

About half of the candidates have come from nonmedical Air Force Specialty Codes, she said.

Airmen will remain on active duty while pursuing their nursing degrees, Moore said. Those accepted into the program must pursue their education at a school with an Air Force Reserve Officers Training Corps program. For more information, go to the Air Force Nursing Education Web site at: https://kx.afms.mil/afnurseeducation