AF postal squadron ready for for the coming holiday crush 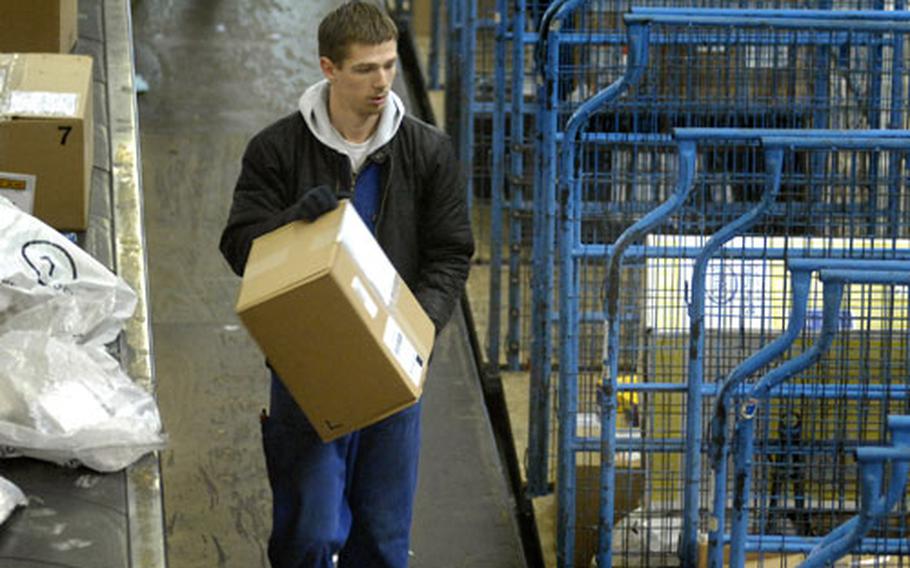 Chris Neumann, a contract mail handler, organizes incoming mail for delivery last week at the mail handling facility in Frankfurt. The volume of mail processed at the facility jumps to some 100 tons a day from mid-December until Christmas. (Ben Bloker / S&S)

But the front line for these airmen isn&#8217;t downrange or fought against a human enemy. Instead, Frankfurt International Airport is where the squadron wages its campaign to get holiday mail to and from bases across Europe.

At Detachment 1 in the airport &#8212; the military&#8217;s largest permanent mailing distribution center &#8212; the airmen work almost completely in the shadows to get &#8220;morale boosting&#8221; mail to soldiers and their families.

On average, the center sends 29 tons of mail a day and receives about 45 tons. But that volume swells to at least 100 tons a day from mid-December until Christmas.

&#8220;The hardest part of what we do is keep the customers (soldiers and their families) happy and keep the mail flow consistent,&#8221; said Tech Sgt. Nakia &#8220;Shawn&#8221; Arrington, who helps oversee mail control.

In 2002, the Frankfurt mailing facility was outsourced to a German contractor, cutting nearly three-quarters of the Air Force personnel.

It is now a $33 million operation manned by 15 airmen who oversee the distribution process, manage billing, escort mail for security and enforce quality control. The airmen mainly supervise the sub-contractors.

With the dollar so low against the euro, Yowell said there has recently been a drop of items sent to the States, but an increase of items received. More people at bases in Europe, he said, are doing holiday shopping through catalogs or online, importing their gifts as opposed to buying them on the economy. That importing rush begins to hit Detachment 1 around Dec. 12, Yowell said, when people begin to receive their orders. The rush goes through well into Christmas.

The process needed for a letter to go from a European base to the States requires dozens of people and precise logistics. For example, a mail truck that leaves Kaiserslautern at 5 p.m. will get to the center at 8 p.m., where the outgoing mail is sorted and documented and is on a plane the next morning, heading toward one of six U.S. hubs.

Mail imported is sorted during the morning and sent on trucks that afternoon, ready to be picked up hours after it arrives in Europe.

Mail sent from the States to soldiers downrange doesn&#8217;t pass through Detachment 1 at Frankfurt, but instead heads straight to Bahrain, the largest temporary military processing plant. Mail sent from Europe downrange first is processed at Detachment 1 then heads to Leipzig, Germany, where it is then sent on to Bahrain.

For the most part, Detachment 1 gets holiday mail where it needs to go on time. Yowell said the 2nd Air Postal Squadron enjoys this time of year and finds it most gratifying when the job is done.

By the numbersThe Air Force&#8217;s 2nd Air Postal Squadron handles all mail sent to and from the States to military members and their families in Europe. The center also processes mail sent from Europe downrange.

Here&#8217;s a look at the volume of mail processed by the squadron&#8217;s Detachment 1 at the military&#8217;s largest permanent mailing distribution center at Frankfurt International Airport: