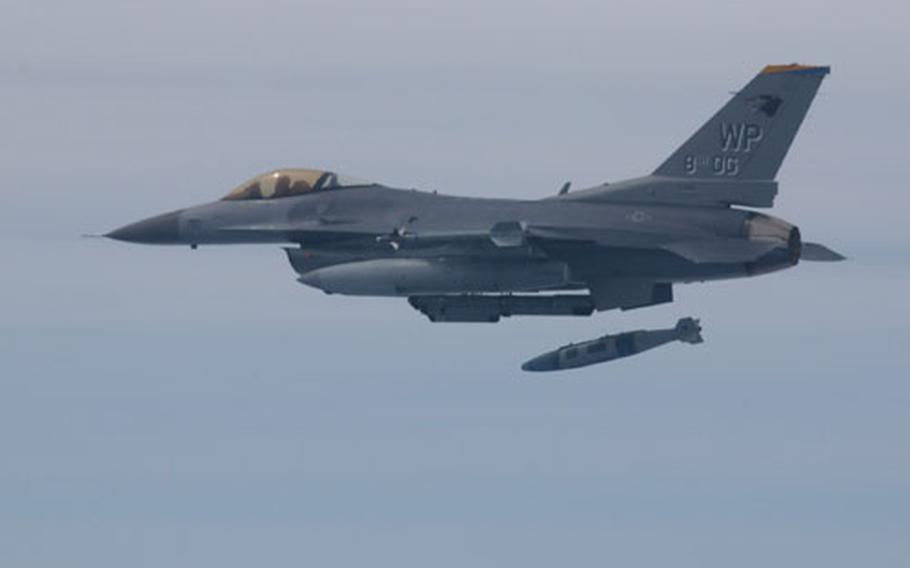 In a training flight over South Korea earlier this month, a U.S. Air Force Block 30 F-16C fighter drops two precision-guided "smart bombs" on a target range on Chik-Do Island. The Block 30&#39;s of the 80th Fighter Squadron out of Kunsan Air Base were recently fitted with the gear necessary to make use of the smart bombs, called JDAM, or Joint Direct Attack Munition. (Courtesy of USAF)

The bombs pinpoint targets without being aimed by the pilot and are the same type used in the April 7 air strike against what was thought to have been Saddam Hussein&#8217;s bunker in Baghdad.

Until recently, only one of the wing&#8217;s squadrons had been fitted with the gear needed to employ JDAMs.

The bomb&#8217;s high-tech gear finds those coordinates with the help of global positioning satellites, and homes in on the target, he said.

Both squadrons already had the ability to use other types of high-tech munitions, like laser-guided bombs.

&#8220;What really sets it apart is, it has its own navigation system in the bomb,&#8221; said Schnitzer. &#8220;Basically what that bomb is doing is going toward the set of coordinates we told it to, which means I don&#8217;t have to actually look at the target for the bomb to hit near-precision.&#8221;

Schnitzer&#8217;s squadron would have eventually been fitted with the gear needed to drop JDAMs.

But they got it early thanks to the Iraqi war, said Schnitzer.

Loading a JDAM is little different from loading other bombs, said Staff Sgt. Dane Bressler of the 80th Aircraft Maintenance Unit. The JDAM takes maybe 45 to 50 minutes, some 15 minutes longer than other types because its smart-bomb technology requires a special cable hookup.

Schnitzer became the first active-duty U.S. Air Force pilot to drop a JDAM from a Block 30 on July 2.