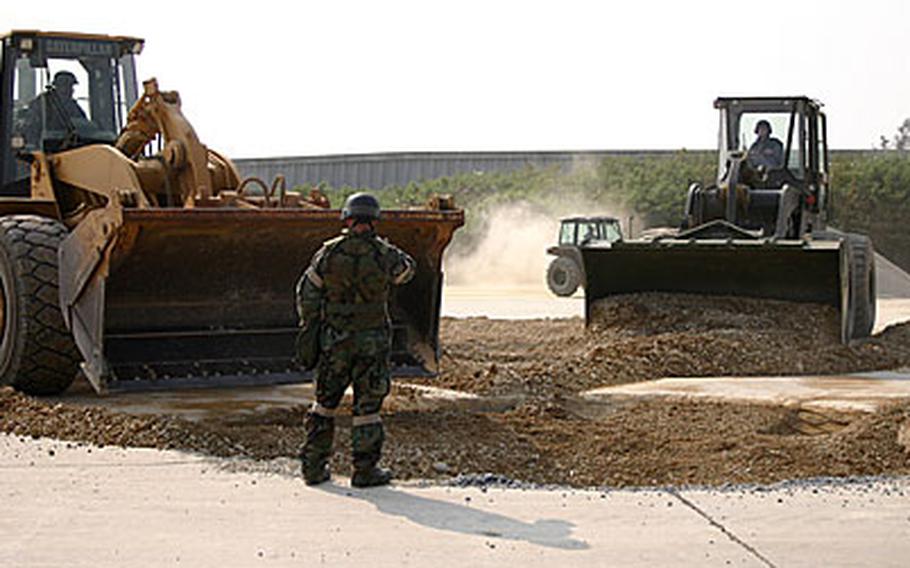 The crater chief, Tech. Sgt. Anthony Aquilana, center, with the 36th Civil Engineering Squadron based at Andersen Air Base, Guam, orchestrates the repair of a runway crater during a Silver Flag exercise run by the 554th Red Horse Squadron at Kadena Air Base on Friday. The 36th Civil Engineering Squadron has been on Kadena since Nov. 11 for contingency operations training, which the daylong exercise assessed. (Cindy Fisher / S&S)

KADENA AIR BASE, Okinawa &#8212; U.S. troops capture an enemy runway. But in doing so, they had to bomb the enemy encampment, damaging the runway Air Force units hope to use.

It&#8217;s up to Air Force civil engineers to establish an air base and quickly get the runway operating.

First comes a tent camp, clearing out potentially toxic hazards, mapping the runway damage and filling craters &#8212; all while under conventional and chemical attack and dealing with casualties while wearing heavy protective gear.

That&#8217;s the scenario the 36th Civil Engineer Squadron had to deal with during an eight-hour Silver Flag exercise Friday in the 18th Munitions ammunition storage area on Kadena Air Base.

The drill is the culmination of a week of training taught by Detachment 1, 554th Rapid Engineer Deployable Heavy Operational Repair Squadron Engineer Squadron, also known as the Red Horse Squadron.

There is no place on Guam where airmen can practice repairing crater-damaged runways, said 1st Lt. Matt Burrell, with 36th Civil Engineering Squadron. They also get to work with equipment unavailable on the island&#8217;s Andersen Air Force Base.

The detachment at Kadena, one of only three Silver Flag sites in the Air Force, runs eight to 10 classes a year for civil engineer, services and personnel support squadrons from Guam and mainland Japan to Alaska and Hawaii, Blair said. They also take a mobile contingency skills training package to South Korea.