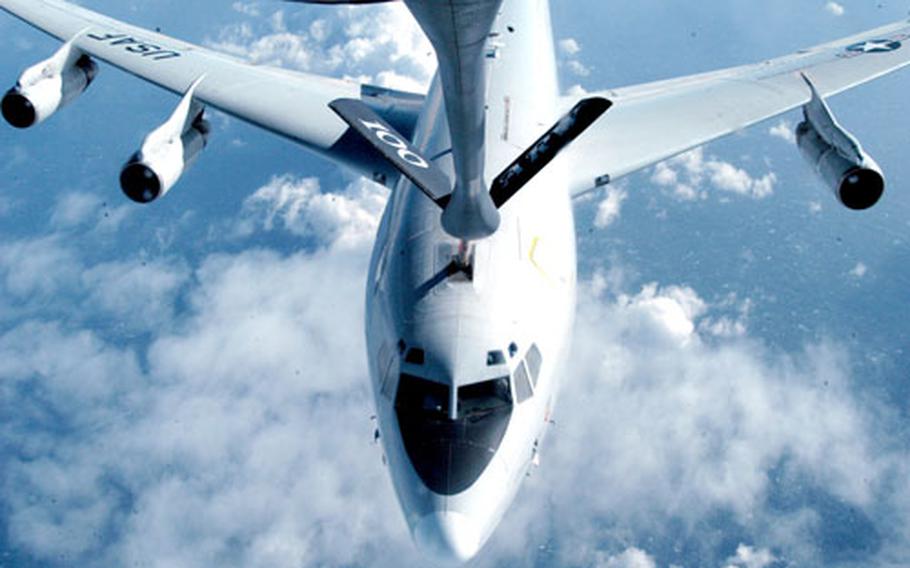 A U.S. Air Force E-8 out of Robins Air Force base in Atlanta takes on fuel during an air refueling operation with the RAF Mildenhall-based KC-135 Air Refueling Jet. The refueling crew flew roughly 2,200 miles to offload 66,000 gallons of fuel in 20 minutes. (Bryan Mitchell / S&S)

A U.S. Air Force E-8 out of Robins Air Force base in Atlanta takes on fuel during an air refueling operation with the RAF Mildenhall-based KC-135 Air Refueling Jet. The refueling crew flew roughly 2,200 miles to offload 66,000 gallons of fuel in 20 minutes. (Bryan Mitchell / S&S) 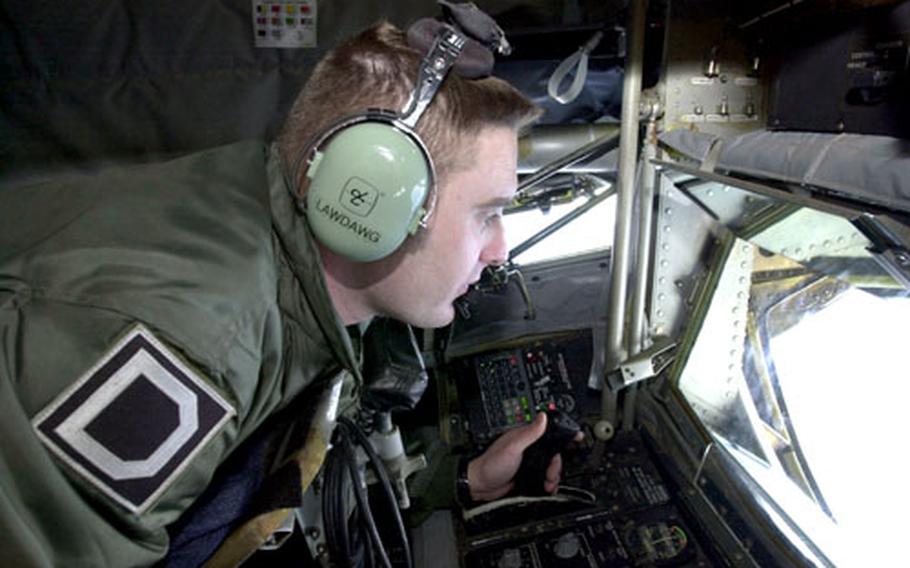 26,000 FEET ABOVE THE ATLANTIC OCEAN &#8212; When Senior Airman Clint Laughman alerted the crew of the E-8 Command and Control Jet there was fuel residue spewing from the aircraft&#8217;s air-fueling receptacle, a few in the cockpit of the Georgia-based aircraft returning from deployment downrange enjoyed a glimmer of hope for Sangria and a siesta.

But after a few minutes, the pressure in the fuel intake system leveled off, the spewing ceased, and the Robins Air Force-based crew continued on its long flight home without the Spanish refueling layover.

The snafu was one of a few blips in what is normally a uncomplicated air-fueling operation for the 100th Air Refueling Wing based out of RAF Mildenhall. The four-man United Kingdom crew flew nearly the distance from New York to Los Angeles in 6&#189; hours to pump enough fuel to fill an average SUV 3,300 times in roughly 20 minutes.

For Capt. Ryan J. Garlow and his crew, the mission began long before his aircraft linked up with the E-8 high above the Atlantic Ocean. First Lt. Chad R. Stewart, 1st Lt. Samuel J. Ensminger and Laughman met more than two hours before takeoff for a pre-mission briefing. That equated to 6:30 a.m. for the scheduled 1 p.m. rendezvous with the returning E-8.

Col. Robert Miller, the commander of the 48th Fighter Wing Hospital, went along for the ride to pick up his compulsory five monthly flight hours.

After the crew was up to speed on the operation, they traveled to the aircraft more than an hour before takeoff. Garlow inspected the interior of the KC-135 while his crew looked over the interior.

&#8220;I&#8217;m looking for any scratches or plugged holes or problems that could affect us during the flight,&#8221; Garlow said as he ran his hand over the belly of the plane.

Thirty minutes later, the engines were turned on and, 40 minutes after that, the converted Boeing 707 lifted off into the Suffolk sky. A smooth ride out over the Atlantic Ocean followed before the two aircraft met at the pre-determined site.

The aircraft were attached in mid-air by a boom forcing thousands of pounds of fuel into the receiver traveling at several hundred mph, yet none of the pilots as much as break a sweat during the operation. Instead, they chatted over the radio about favorite restaurants, choice duty locations and even the keys to a healthy marriage.

Meanwhile, Laughman kept a steady eye on the boom as it rested on the E-8.

And then it was over. The refueled E-8 dropped under and away from the KC-135 and the two aircraft turned in opposite directions to head home.